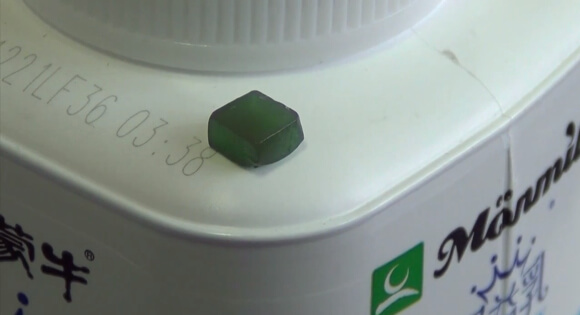 Most of us aren’t scientists, but every once in awhile, nearly everyone unintentionally runs a science experiment in their refrigerator. If left long enough, for example, milk turns into a foul smelling yogurt analog. Empirical fact. Most of us know this because, distrusting the ‘sell by’ label, we take a sniff before pouring.

Researchers at China’s Peking University want to save you a few retch-inducing moments in your life with a new simple measurement method. Led by Chao Zhang, Ph.D, the group invented a gel-like, color-coded “smart tag” to alert consumers if perishable foods have gone bad or old medicines are still active.

The Peking University gel tags contain metallic nanorods specially calibrated to change color at about the same rate microbes grow in food. Additionally, the process is sensitive to temperature—a printed date tells you when a product was packaged, but it doesn’t tell you anything about how it’s been stored since then. The tag would register whether the product was exposed to temperature fluctuations and communicate that to consumers.

“In addition, all of the reagents in the tags are nontoxic, and some of them (such as vitamin C, acetic acid, lactic acid and agar) are even edible,” Zhang says. 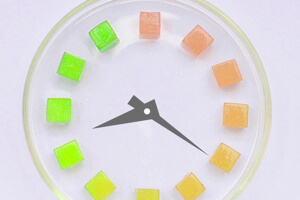 The group calibrated the tags using milk, but they can be adjusted for any food, even medicine. Chemical composition dictates the color code—counterintuitively red (fresh) to green (spoiled).

The nanorods, made of gold, are naturally red in color, but over time they react with silver chloride. As the rods change shape and silver chloride deposits thicken, the color morphs from red to orange and green.

Though the tag is small, about the size of a corn kernel, it is thick. Depending on adhesive strength, it seems easily brushed off or otherwise damaged. And we wonder whether a device that actually measures the byproducts of bacterial growth might be better?

Maybe. But sometimes simplest is best. The tags improve on simple ‘sell by’ dates, and at a mere fifth of a penny per tag, it’s unlikely any sensor could compete.