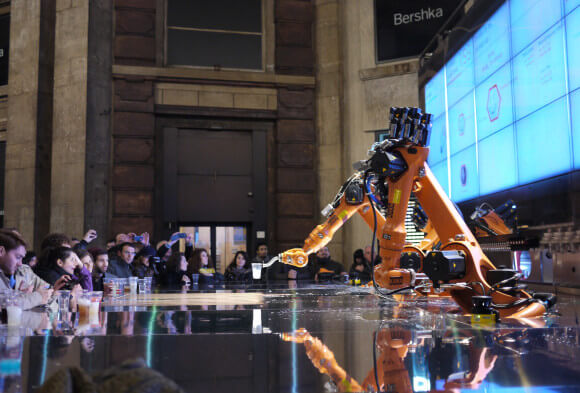 There’s a new bartender set to sail on Royal Caribbean’s next-generation cruise ship—a robotic bartender, to be precise. The Makr Shakr, created by designers at MIT Senseable City Lab, may not indulge stories of your latest break-up or offer philosophical advice as it slides your Moscow Mule across the countertop—but that doesn’t mean the Makr Shakr isn’t here to entertain.

This November, the robot bartender will begin serving drinks on the state-of-the-art cruise ship ‘Quantum of the Seas’. Its abilities were first showcased at the 2013 Google I/O annual developer conference—from creating a near-infinite variety of customized drinks, to the robotic arms’ dynamic movements, capable of heavy duty motions like shaking and fine-motor skills such as slicing fruit and garnishing drinks.

The robot’s movements were programmed using the filmed gestures of Roberto Bolle, principal dancer with the American Ballet Theater, along with Italian director and choreographer Marco Pelle. After users download an app onto their handheld devices and custom order their drink, the cocktail is assembled by three robotic arms—whose moves mimic the best bartenders. The finished libation is served up on a conveyor belt.

Even though Makr Shakr’s movements are modeled after humans, the creators say that they are not trying to replace bartenders with robots. They view Makr Shakr as more of a social experiment observing how people embrace new possibilities offered by digital manufacturing. 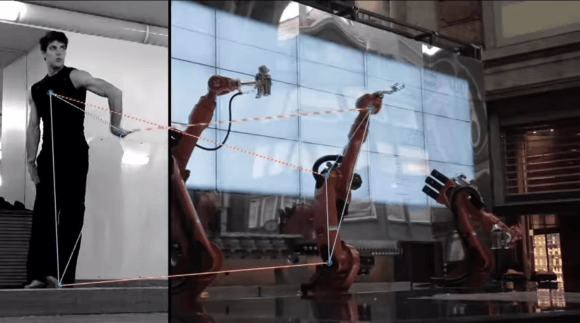 “Makr Shakr is a great example of how digital technologies are changing the interaction between people and products—a topic that our laboratory has been exploring in great depth,” said Carlo Ratti, director of the MIT Senseable City Lab.

Social connections are woven throughout the co-creation and mixing of ingredients, where users can learn from each other, sharing recipes and photos on social networks.

This distinguishes Makr Shakr from other robotic bartenders in the sense that it attempts to make the preparation process more efficient by having a robot do the physical task of mixing while at the same time leaving room for it to be a human-centered experience.

Yet, while the creators are quick to say this is an experiment in social interaction and not meant to replace human bartenders, it is clearly yet another example of the rapid speed at which automation is advancing. Now that the Makr Shakr is a commercial product on the open seas, it might not be long until it (or something very much like it) is in a bar near you. 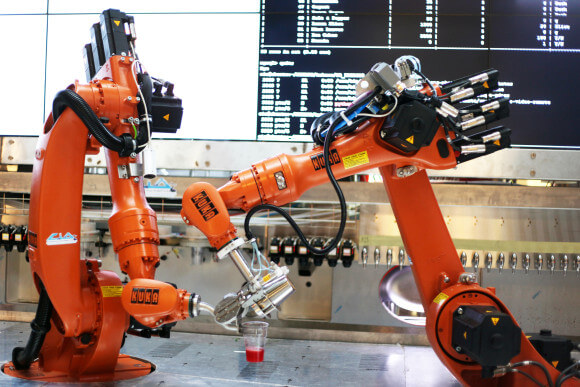 Of course, robot bartenders aren’t new—we’ve written about robots in the food industry ranging from the comical to the potentially disruptive, such as this robot serving up to 360 burgers per hour. But however you spin it, automation is a controversial topic.

Many people believe that we will continue on the historical trajectory of losing some jobs to technology and gaining new jobs. Others point to the decoupling of productivity and employment—a phenomenon suggesting that as digital technologies boost productivity, there is not a correlative growth in jobs—as evidence that we’re on the cusp of widespread technological unemployment. Still others argue that while we might experience some turbulent times ahead, eventually automation will lead humans to a life of creativity and leisure.

It seems the creators of the Makr Shakr tend to take the glass is half full view. In their promotional video, they include a quote from the Dutch artist and architect, Constant Nieuwenhuys, who envisions a future where humans pursue a life of creative play, once machines take over every mundane task:

“In the worldwide city of the future…a society of total automation, the need to work is replaced by a nomadic life of creative play, a modern return to Eden. The ‘homo ludens’, whom man will become once freed from labor will not have to make art, for he can be creative in the practice of his daily life.”

It’s hard to argue that the future we’re sprinting towards is something other than one of far greater automation (it’s faster, cheaper, more efficient on every level). What’s still left for us to decide is where human labor fits into the picture and how smooth the transition will be.