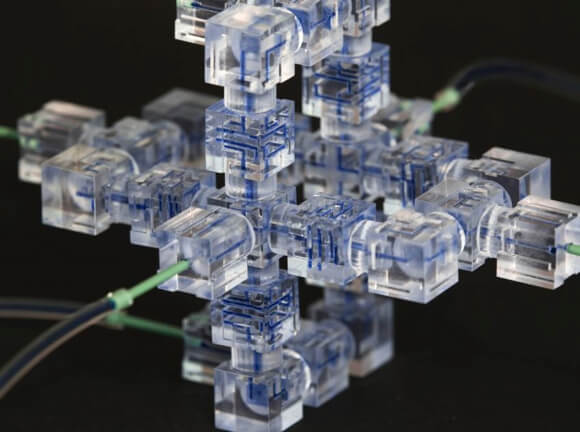 Some illnesses, like the common cold, are so familiar we don’t need a doctor to diagnose them. Give it a few days in bed binging on Netflix and fruit juice. Other illnesses take a lot more analysis—bodily fluids sent to a lab, a few days waiting, a several hundred dollar bill (and sometimes that still lingering question mark).

Now, imagine shrinking down one of these medical laboratories, making it so small it fit on your bedside table or in the medicine cabinet. This mini-lab could instantly perform the same analysis for a fraction of the cost and using but a tiny droplet of fluid.

Sound like sci-fi? It isn’t. Researchers are hard at work on “lab-on-a-chip” tech—which is exactly what it sounds like.

Small amounts of liquid are forced over a flat surface with tiny channels carved throughout. By the curious laws of fluids at the microscale, such as laminar flow, the chip is designed to move, mix, separate and analyze fluids. 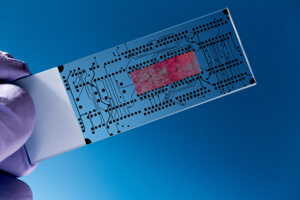 The basic microfluidic technology behind lab-on-a-chip isn’t new. It’s been around since the early eighties and is widely used in desktop inkjet printers. In recent years, however, new applications have begun to span engineering, chemistry, and biotech and include DNA analysis, disease detection, clinical diagnostics, and synthetic chemistry.

Here’s the problem, useful as the technology is, designing new systems is time consuming, expensive, finicky—and after all is said and done, they often don’t work.

In an attempt to speed microfluidics research, Krisna Bhargava, a materials science graduate student at the USC Viterbi School of Engineering, decided to simplify things by standardizing steps and, of all things, adding a dimension to the process.

Bhargava was inspired by Legos—where a set of standardized components with simple properties snap together to form more complex structures.

“If you’ve grown up to be an engineer or scientist, you’ve probably been influenced by Lego at some point in your childhood,” Bharghava says. “I think every scientist has a secret fantasy that whatever they’re building will be as simple to assemble.”

Using super-precise 3D printing, Barghava and a USC Viterbi team of researchers, designed and fabricated eight blocks about the size of your standard throwing die. Each block performs a particular microfluidic function.

Alone they aren’t particularly useful, but by snapping them together, a researcher can rapidly create a functional microfluidic system for performing various tests. And perhaps the best part is if it doesn’t work, you pull it apart and start again. Quickly testing a large number of combinations can yield a finished product faster.

Further, advanced 3D printing on the tiniest scales made fabrication a breeze.

“We got the parts back from our contract manufacturer and on the first try they worked out better than I could have dreamed,” says Bhargava. “We were able to build a working microfluidic system that day, as simple as clicking Lego blocks together.”

In a paper on the topic, published in Proceedings of the National Academy of Sciences, the team outlined a test case where they used their invention to size droplets of fluid (useful in drug delivery, for example). They say their 30-cent system matched the performance of a $30,000+ optical microscope traditionally used for such work.

This isn’t to say all lab-on-a-chip will soon be lab-in-a-Lego. Adding a third dimension means taking up a lot more space. And currently the possible array of microfluidic systems you could create are limited by the fact only eight modules exist.

But the team plans to develop more components to enable more complex systems. And they hope to start an open-source community, where new designs are swapped and shared—all this to speed microfluidics research more generally.

“People have done great things with microfluidics technology, but these modular components require a lot less expertise to design and build a system,” says co-author and USC chemical engineering and materials science professor Noah Malmstadt. “A move toward standardization will mean more people will use it, and the more you increase the size of the community, the better the tools will become.”