Space exploration has many challenges, but one inconvenient fact in particular – the lack of oxygen in much of the universe – poses a real challenge to making offworld exploration and living a reality.

Here on earth, we have a well-developed natural system for sustaining human life: the atmosphere and biomes. In space, we need analogous closed-loop life support systems which sustain us – not an easy task.

Fortunately, advances made with new synthetic materials could open up exciting possibilities for manned space exploration.

From a new material that sucks the oxygen out of a room and stores it, to a man-made photosynthetic material which generates oxygen, these new developments could be an answer to solving that pesky lack of oxygen problem.

Researchers at the University of Southern Denmark have synthesized a crystalline material that absorbs and stores oxygen in large quantities. It can be used to bind, store and transport oxygen, like dense artificial hemoglobin. 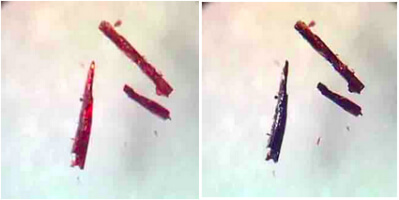 A 10 liter bucket of the solid material is enough to store all the oxygen in a room. A few grains contain enough oxygen in a single breath.

Once trapped, oxygen can be stored until the material is heated gently to release the oxygen.

“The material can absorb and release oxygen many times without losing the ability. It is like dipping a sponge in water, squeezing the water out of it and repeating the process over and over again”, explains Christine McKenzie, a Physics Professor University of Southern Denmark, who led the project.

When saturated with oxygen, the substance can be likened to an oxygen tank, containing pure oxygen under pressure. The difference is that this material stores three times the amount of gas in a pressurized cylinder.

The key component of the new material, cobalt, is bound in a specially designed organic molecule. 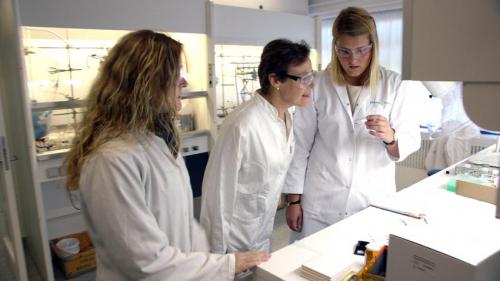 “Cobalt gives the new material precisely the molecular and electronic structure that enables it to absorb oxygen from its surroundings. This mechanism is well known from all breathing creatures on earth: Humans and many other species use iron, while other animals, like crabs and spiders, use copper. Small amounts of metals are essential for the absorption of oxygen, so actually it is not entirely surprising to see this effect in our new material,” says McKenzie.

When bound to the material, the oxygen molecules collectively occupy much less space than when they expand in gaseous form. The same principle allows hemoglobin in your body to bind about 70 times the amount of oxygen it could hold if the oxygen was simply dissolved in the blood.

Depending on atmospheric conditions, like oxygen content, temperature, and pressure, it takes from seconds to days for the substance to absorb oxygen from its surroundings. Different versions of the substance can bind oxygen at different speeds.

Given this, a mask containing layers of the substance might actively supply oxygen without the help of pumps or pressurized equipment.

McKenzie and her team are now researching whether light can trigger oxygen’s release from the material, which would be halfway to artificial photosynthesis.

Being able to absorb, store and release oxygen at will in a dense, concentrated form has many exciting implications.

But what if the place where we need oxygen the most, is where there isn’t any to absorb in the first place?

At the Royal College of Art, Julian Melchiorri has developed a photosynthetic material that lives and breathes as a leaf does. The man-made leaf absorbs carbon dioxide and water and releases oxygen. The leaf works by suspending chloroplasts (the part of the plant where photosynthesis happens) in a material made from silk protein.

Melchiorri envisions the facades of buildings and lampshades covered in the photosynthetic material, exhaling fresh air for us. He also imagines applications for space exploration. While plants do grow in zero gravity, a material like this could produce oxygen with much less management than the time and effort required for growing plants.

From the research article, it’s unclear the amount of oxygen the leaf can produce, how long the chloroplasts can self-sustain in silk proteins and what happens to the glucose byproducts of the photosynthetic conversion.

With all new materials, a host of unanswered questions remain, and of course, the possibility that they cannot scale for commercial applications is real.

Still, we can imagine the possibilities…

If oxygen could be created via artificial photosynthesis in space, it could also be collected and stored much more compactly than in tanks.

At MIT, researchers have developed a new space-suit design based on the concept of providing a “second skin” for astronauts.  Perhaps in the future, an oxygen-absorbing and releasing substance could be laced into the fabric of the space suit itself.

Some argue that manned exploration of our solar system is not on the horizon, that the hurdles to overcome the extremely unfriendly effects of outer space on the human body are too great.

We have discovered only one way to travel through space, and that is suspended in simulated-earth environments. Simply put, we build a bubble of earth and stay in it to survive. For the foreseeable future, this will remain the case.

If we are to pursue manned exploration of space, considering how we could incorporate these types of advanced materials into future space suits could move us closer to the day when humans roam freely through the solar system.

At least one thing is for sure: we will never stop exploring beyond our known boundaries. The need to understand our origin in the universe is too great. And space, as others have noted, is the final frontier.