The largest living organism on the planet is a mushroom. You can make a hat out of a boiled mushroom called Amadou, or as our ancestors once did, you can use it as tinder to start a fire. With that fire, you might cook up one of the many delicious edible mushroom varieties. But choose the wrong one and you’ll get sick or die.

Mushrooms may also be powerful medicine.

In a talk yesterday at Exponential Medicine, Paul Stamets held forth on the way of the mushroom, amply demonstrating why he’s one of the world’s top mycologists. 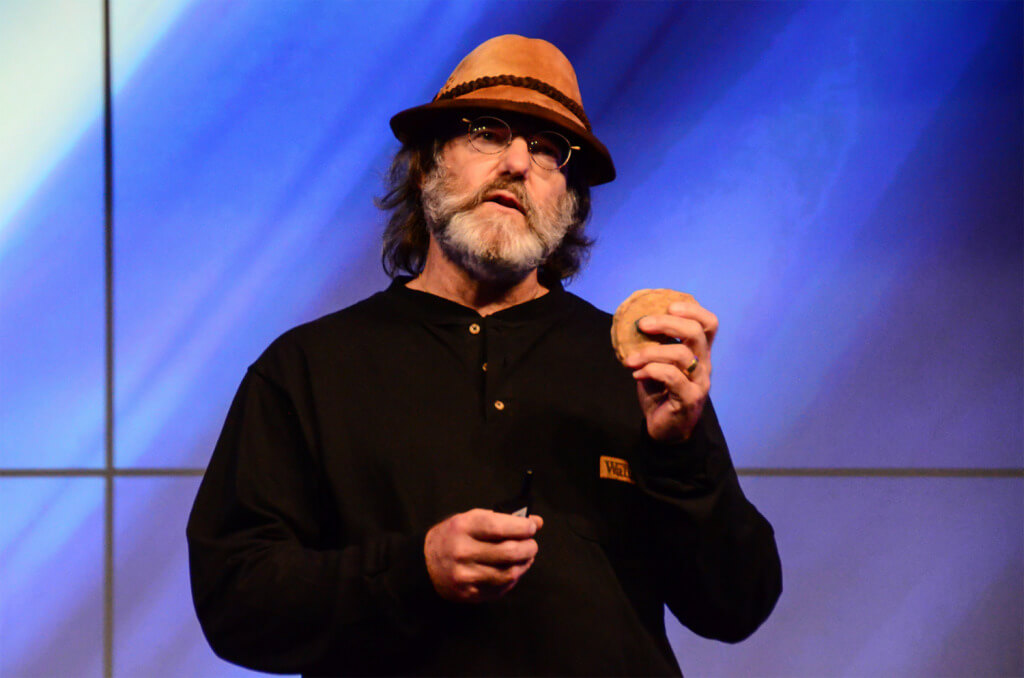 As far back as the Greeks, Stamets said, mushroom therapies have been lauded by wise men. Hippocrates described Amadou as antinflammatory in 450 BCE. The greek physician, Dioscorides, called Agarikon “the elixir of long life” in 65 AD.

Just as mushrooms played a role in ancient medicine, they may also prove critical to the future of medicine. Nature is brimming with complex molecules, if only we can discover their uses. The natural origins of penicillin are well-known, but did you know some 73% of anti-cancer drugs trace their roots to natural products?

In June 2009, Stamets said, his mother was diagnosed with late stage breast cancer. She was reticent to visit the doctor’s office, and when she did finally go, after a fearful phone conversation with her son, she was given three months to live.

The doctor prescribed a treatment of chemotherapy and Herceptin and noted a study into turkey tail mushrooms. Perhaps she could take some of those too. On the advice of the doctor (she had to hear it from him) and Stamets—she did.

Five years on she’s cancer free, the only survivor of a group of fifty patients taking Herceptin. According to Stamets, the turkey tail mushroom suppresses inflammatory response, enhances the microbiome, and may be a powerful adjunct cancer therapy. “We think it decloaks cancers for discovery by the immune system,” he said.

We’re beginning to discover a set of very complex molecules formed by mushrooms according to Stamets. Two coumarin compounds unique to a variety of Agarikon, for example, have been shown to help fight the bacteria that causes tuberculosis. Agarikon also exhibits antiviral activity against cowpox, swine and bird flu, and herpes.

And in fact, Stamets said, bees may visit mushrooms for their antiviral properties.

Back in 1984, Stamets said, he noticed a steady stream of bees between his beehives and some mushrooms he was cultivating. In his words, they were “sipping my mycelium.” He wrote about it, but it was largely put aside as a curiosity and no more.

Years later, a friend came to him to discuss colony collapse disorder—a mysterious phenomenon where entire bee colonies simply disappear. Stamets turned his attention to the problem and started thinking about the ecosystem he knows best.

As it turns out, bears scratch trees in old growth forests, and a fungus grows up in these scratches. Bees get health benefits from drinking tree sap, and Stamets hypothesized, they may benefit from the fungus growing there as well.

But as bees are trucked from one orchard to the next they’re fed on sugar water. Stamets thinks they might not be getting enough mycelium food, making them more vulnerable to pesticides and viral infections.

To test his hypothesis, Stamets said he developed a mushroom extract and experimented with different concentrations. Depending on the dose, when bees sipped this “Myco Honey,” their viral payload plunged.

As it turns out, bees may like fungus for its immunological benefit. This isn’t case closed, but Stamets thinks it’s an intriguing connection—one that wouldn’t have been made if he hadn’t been talking to his friend about colony collapse disorder.

The lessons? One, we’ve only begun to just barely grasp the astounding complexity of our ecological web. Two, disciplinary cross-pollination is critical to finding overlooked or surprising hypotheses in science. Three, mushrooms are good medicine.