According to the World Health Organization, over half a million people died from malaria in 2013, 75% of which were African children under the age of five. Despite these grim numbers, there has been a 47% decline in global malaria deaths between 2000 and 2013.

This decline is due to a combination of interventions including therapeutic drugs like chloroquine and doxycycline, prevention of mosquito bites via the use of insecticides and physical barriers like bed nets, as well as improved health education and awareness for the most vulnerable communities.

Despite these interventions, development of an effective vaccine or cure for malaria has eluded scientists for decades. Further, many drugs used to fight the disease after infection are losing effectiveness due to resistance.

However, the next generation of anti-malarial drugs are under development. Using novel mechanisms, they are fast-acting and may help fight resistance, giving reason for cautious optimism help is at hand.

One such drug, (+)-SJ733, has recently shown great promise, and the researchers behind the study know exactly how it works (that’s not always the case for therapeutic drugs). Scientists at the St. Jude Children’s Research Hospital reported their findings in a December issue of the journal Proceedings of the National Academy of Sciences. 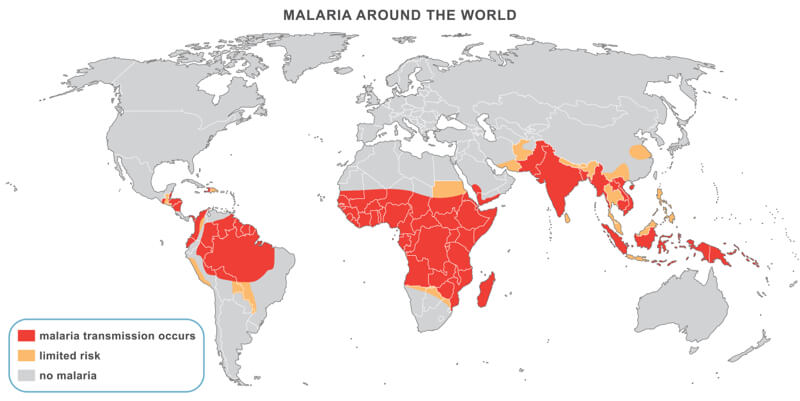 Malaria results from infection by five species of parasitic protozoans from the genus Plasmodium. A widespread disease burden transmitted via mosquito bites, malaria is found in countries near the equator in Central and South America, Sub-Saharan Africa, and South Asia.

After the parasite infects a red blood cell, it travels to the liver where it reproduces and infects new blood cells. It then reproduces in the blood cells until they are so full of parasites that they burst, and the newly formed parasites continue the cycle of infection.

At this point, the immune system kicks in to remove the infected cell along with its parasitic guest before it has a chance to reproduce. This is because one of the most important jobs for the immune system is the removal of any damaged cells before they have a chance to affect tissues or organs.

During the experiments on a mouse model of malaria, researchers found that one dose of (+)-SJ733 reduced the number of parasites by 80% within 24 hours and completely eliminated them within 48 hours. They also noted that the drug didn’t seem to cause any major side effects by targeting healthy cells, it only worked in the infected cells.

Further, because of the speed at which (+)-SJ733 eliminated the parasite, it might reduce the chances of a drug resistant parasite developing. Many malaria drugs have shown promise even in humans before drug resistance by the rapidly reproducing parasite rendered them ineffective.

The researchers are now starting the first human clinical trials using (+)-SJ733 to see whether the drug is safely tolerated in humans and whether it is just as effective as it was in the mouse model. And currently, other efforts are underway to create drugs that target the same ATP4 that (+)-SJ733 targets. One such drug, NITD246, is already in clinical trials.

If successful, these drugs would add to our list of options in the ongoing fight against this deadly disease.