Bugs as Drugs: Seeking the Microbial Secret to Health

Our body is, in essence, more ecosystem than organism.

The human body teems with trillions of microbes — bacteria, viruses and fungi — and at any moment, we may be carrying between one and three pounds of these micro-hitchhikers in colonies on our skin, groin, mouths, and sinuses. By far, however, the gut microbiome ecosystem — the largest and most complex — is the one that has both academic researchers and pharmaceutical companies hooked.

The reason? Our gut bugs may be the new frontier of a billion-dollar bioceutical industry.

Manipulating the microbiome for health is nothing new. The growing probiotics industry earns some $30 billion globally each year selling supplements and foods and drinks like yogurt or kombucha. The health claims are: improved intestinal health, buzzing energy, weight loss and “all natural” mood enhancement.

“It’s unregulated, unsupported,” says Dr. Martin Blaser, a pioneer of human microbiome studies at NYU and advisor to Second Genome, a startup based in the Bay Area.

But that’s set to change. For years, the boom in over-the-counter probiotics was more hype than science; now, mounting evidence is beginning to link conditions ranging from the physical ­­— irritable bowel syndrome, Type 2 diabetes — to the mental — autism, Parkinson’s, depression ­— to the gut’s resident microbugs.

“The microbiome field has produced some of the most exciting science discoveries of the last five years, and its potential impact on human health is just too big to ignore,” says Bernat Olle, chief operating officer at Vedanta Biosciences, a Boston startup that looks to treat autoimmune and inflammatory diseases by modulating the microbiome.

Dr. Justin Sonnenburg, a microbiologist at Stanford University, agrees. “Undoubtedly, the microbiome is a little drug factory in our intestine,” he says.

One with many unresolved mysteries, and a hell of a lot to offer.

The tantalizing links between gut microbes and health have only recently begun to be accepted by mainstream science.

The main roadblock is proving causality. “It’s very difficult to tell if microbial differences you see associated with diseases are causes or consequences,” Rob Knight, a microbiologist at the University of California, San Diego. 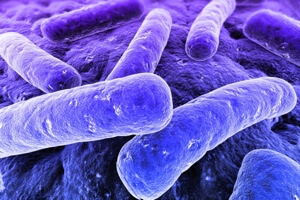 So far, the question’s been hard to answer. Most sophisticated, tightly controlled experiments were done in mice raised in completely sterile environments — hardly the best model, given that most humans are colonized at birth by resident microbes in our mothers’ vaginal canal.

Data in humans are far more limited and often correlational in nature. In varying degrees, our microbiome connects to a slew of metabolic diseases, such as obesity and diabetes. It also, crucially, acts as a communication channel between our immune and digestive systems.

The link to brain disorders is perhaps the most tantalizing. Children with autism, for example, often also suffer from gastrointestinal problems. As do patients with anxiety, depression, schizophrenic and neurodegenerative disorders, suggesting malfunctioning gut microbes. But is it just a connected fact, or is it a cause for their illness?

Without figuring out causal relationships, there’s little use in pursuing a drug. But bioceutical companies like Second Genome have a workaround. The goal is not to target every disease, says CEO Peter DiLaura, it’s to take aim at just a few.

In particular, ones with large unmet therapeutics need and evidence showing a large microbiome-driven causation, explains DiLaura. Obesity, Type 2 diabetes and Crohn’s disease all fit the bill, and Second Genome is tackling each with laser focus.

If successful, Second Genome could relieve millions of people of their chronic disease. The key to unlocking the gut-health secret, said DiLaura, is tapping into the ancient language that connects host with microbe.

“We’re code breakers,” says DiLaura. For eons, we have only focused on the host side of things; with advances in genomic profiling and big data, we can finally tap into the conversation within and surrounding the microbiome.

Preliminary results hint at complex answers. The composition of the gut microbiome — the balance between “good” and “bad” bacteria — can influence health by regulating inflammation in the body.

We can easily change the microbiome composition with diet and antibiotics, sometimes in less than a week, says Sonnenburg. This works well in our favor. His team is currently working on a molecule called sialic acid, which prevents harmful bacterial from taking over the gut after heavy antibiotic use.

Other companies are taking “bugs as drugs” quite literally.

OpenBiome, a company based in Cambridge, Mass, is providing frozen stool samples from healthy, pre-screened individuals to hospitals. There, the samples are put into the colons of people suffering from the deadly — and otherwise untreatable — gut infection Clostridium difficile, which kills 14,000 Americans each year.

Early results have been nothing short of remarkable so far: in a 2011 review of 317 patients, fecal transplants cleared up the infection in 92% of cases. To facilitate long-term maintenance treatment, the team is working on capsules that patients can take orally.

You might be thinking eww: after all, it’s hard not to give a crap about swallowing poop pills. Researchers agree. The next step is to try to isolate and culture healthful strains of bacteria that bear the brunt of the therapeutic work in fecal matter, and make them into probiotics to stop recurrent infections or prevent one from happening altogether. So far, the effects are there but moderate, and scientists are tweaking the probiotic composition to further optimize treatment.

Arguably, however, the most pragmatic approach is looking at gutbug bioactives — that is, proteins and metabolites secreted by the microbiome that impact health.

Second Genome is striding down this path. In close collaboration with academic advisors, the company is striving to find bioactives that are secreted by a healthy microbiome. So far, research is homing in on a class of chemicals called short-chain fatty acids. These molecules are constantly produced as gut microbes break down starchy foods, which — in ways yet uncovered — regulate our immune system, the integrity of our brain cells and an array of metabolic pathways.

Other molecules may combat the deadly effects of multiple sclerosis, a devastating degenerative brain disease currently without cure. Yet others may prove to be a new source of antibiotics, to amp up our rapidly dwindling antibiotic arsenal.

We’ve uncovered only the tip of the bioactive iceberg, and it’s a field ripe for discovery.

“People are eager to learn what exactly helpful bacteria are doing,” says Dr. Michael Fischbach, a microbiologist at the University of California, San Francisco, who uses machine learning to hunt down drug-making genes in the human microbiome.

“Nobody had anticipated that they have the capability to make so many different kinds of drugs,” says Fischbach. “We used to think that drugs were discovered by drug companies and prescribed by a physician and then they get to you.”

Forget that. The future of drug making may be right on — and inside — your body.