The worlds of science, technology and patent law eagerly await the U.S. government’s decision on who deserves patents on what many have referred to as the biotechnology invention of the century: the CRISPR/Cas9 gene-editing technique.

Scientists hail CRISPR/Cas9 as more accurate and efficient than other, now-traditional genetic engineering methods. As a result, CRISPR has generated worldwide debate about how it could accelerate the manipulation of plants, animals and even human beings at the molecular level. That some DNA modifications can be passed on to future generations raises particular concern.

But the patent dispute, focusing on whether scientists at the Broad Institute of MIT and Harvard or those at University of California, Berkeley invented the technology, seems far from these ethical concerns. Each institution asserts that its scientists are the rightful inventors — and therefore the owners of the CRISPR/Cas9 patents. As proof, the scientists are submitting their published articles, laboratory notebooks and affidavits to the US Patent and Trademark Office, which will make a decision in the next few months.

This decision will influence whose name will go down in the history books, and perhaps also who will receive a Nobel Prize. And it will determine which institution will make millions by licensing use of the patented invention to researchers at other universities and companies.

But amid all the breathless anticipation, we’ve been ignoring two important lessons from the CRISPR/Cas9 patent dispute: patent systems no longer fit the realities of how science works, and patents give their owners significant control over the fate and shape of technologies.

Do We Need Patents to Stimulate Innovation?

The U.S. patent system was built on the idea that the promise of an exclusive right to commercialize a technology for a limited period of time provided an important innovation incentive. Even today, this argument is used to justify strong patent systems across the world.

But as basic science and applied technology have become increasingly difficult to distinguish, and more university scientists are receiving patents on ground-breaking discoveries like CRISPR, the old rules no longer seem to make sense. The modern patent system was built with individual entrepreneurs and discrete machines in mind. But university-based science is usually incremental and collaborative, driven by the hopes of tenure, promotion, grant funding, respect among colleagues and, if extremely lucky, a major scientific discovery.

Indeed, whichever emerging CRISPR history you read, you learn about a series of discoveries made by an international array of professors, postdoctoral fellows and students, driven by intellectual curiosities across multiple, seemingly disconnected topics.

As they got involved, the Broad’s Feng Zhang, Berkeley’s Jennifer Doudna and the Max Planck Institute’s Emmanuelle Charpentier, the scientists involved in the U.S. patent fight, were surely motivated by the excitement that they might get credit for a major biotechnology breakthrough. But to think that patents were a major motivator is a serious misunderstanding of how science works and what drives scientists. Most, if not all, of the patent revenues, after all, will go to their institutions and not to them personally.

We have seen similar situations before in the world of biotechnology. When there are dozens of participants and multiple motivations, it’s enormously difficult — if not simply incorrect — to identify one person or institution as deserving the credit.

Furthermore, especially in cases where there is widespread scientific involvement, patents ultimately become more hindrance than help, forcing scientists already working in the field to apply for licenses in order simply to continue.

For all these reasons, it’s time to consider a more nuanced approach to patents in biotech, one that disentangles innovation and the public interest from profits.

Power of Patents, in Absence of Regulations

The CRISPR dispute also highlights how patents influence the social and ethical consequences of a technology.

We tend to focus on how patents assign credit, facilitate financial gain for their owners, and therefore shape the marketplace.

But the control that patent offices award extends much further than that, particularly in the absence of regulations. As patent holders decide whether and how to license their technologies, they can determine the shape a particular field takes, the technologies that become available, who has access to them, and what kind of access they have.

At present, despite CRISPR’s potential to enable relatively simple human genetic engineering that could be passed down through generations and broad support for national and international laws to govern its development and use, there are no U.S. laws governing CRISPR research or technology.

This lack of regulation means that whichever institution is eventually awarded the CRISPR patents will have enormous control over how the controversial technology develops. Its licensing decisions will essentially determine what kinds of research will take place in embryos, whether there will be limits on this research, and what kinds of human genetic engineering might become commercially available.

Consider a similar situation, the now-famous case of biotechnology company Myriad Genetics’ patents on the BRCA genes, which confer increased susceptibility for breast and ovarian cancer.

In the mid-1990s, Myriad used its patents to establish a monopoly over BRCA gene testing in the United States. In the absence of regulations around genetic testing, the company’s patents gave it control not only over who could offer BRCA gene testing but also how the technology was built and made available. This had important ethical and social implications.

Myriad Genetics, which obviously had an interest in widespread use of its technology, essentially had the freedom to set standards about when and how BRCA gene testing would be made widely available, even in the face of significant uncertainties about the meaning of the test results and the treatment options available. And because it did not require that users seek testing through a genetics specialist, BRCA gene test users often had to wade through these complicated uncertainties on their own. (Years later, civil society groups launched an unprecedented court challenge that eventually led the U.S. Supreme Court to revoke these patents in 2013.)

CRISPR’s Future Use in One Institution’s Hands

Despite the enormous power the CRISPR patent holder will have in shaping the development and use of the new technology, we know little about how the Broad or Berkeley will handle it. Both institutions emphasize their commitments to the public interest, and particularly in licensing the technologies widely and cheaply to other nonprofit institutions.

But neither has addressed these ethical questions. Will their licensing agreements include language that prevents the use of CRISPR for human gene editing, for instance? Or a requirement that licensees comply with National Institutes of Health guidelines that may emerge, even if those institutions do not use NIH funds?

Both Doudna and Zhang have acknowledged the ethical challenges at stake and articulated their support for regulatory frameworks governing the use of CRISPR in people. But we don’t know whether their institutions are thinking about how to develop systematic approaches to these issues in their licensing decisions.

Particularly in the absence of a U.S. regulatory framework, the patent holder should address these ethical issues proactively and in a transparent manner. Consulting with ethicists, historians and social scientists who are experts in the topic can help developers understand who might stand to lose and win with CRISPR’s development, how to avoid the eugenic mistakes of our past and how these ethical and social concerns are connected deeply to decisions about CRISPR patents and licenses.

And in the future, we should seriously consider the importance of the patent system — almost by default — in shaping the moral dimensions of science and technology. 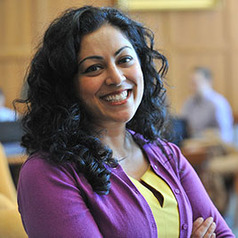 Shobita Parthasarathyhttp://shobitap.org/
I am associate professor of Public Policy and Women's Studies at the University of Michigan. My research focuses on the comparative politics of emerging science and technology, particularly genetics and biotechnology. My first book, Building Genetic Medicine: Breast Cancer, Technology, and the Comparative Politics of Health Care (MIT Press, 2007). Its findings influenced the 2013 US Supreme Court case focused on the patentability of human genes. I am a faculty affiliate of UM's Science, Technology, and Society Program.
RELATED