Augmented Reality, Not VR, Will Be the Big Winner for Business

Sometimes exponential technologies hide in plain sight. Their innovation speed, market size, and number of practical uses seem to be progressing linearly, until suddenly they tilt upwards and turn on the boosters.

A case can be made that augmented reality (AR) in enterprises is just such an exponential technology. A growing number of companies are busy developing and releasing AR systems for enterprise settings.

Part of AR’s explosive growth can be traced to a wide array of uses in business settings. The tech is a fundamental component in the hardware and software revolution, known as Factory 4.0. 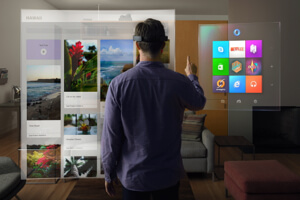 While virtual reality is about creating closed, fully immersive digital experiences, augmented reality systems overlay sensory information, such as visuals and sounds, on the real world around you.

The best-known example is Google Glass—a kind of partial AR experience where a square display appears in a user’s field of view. The device never became the success with end-users that Google was hoping for.

However, with 20-20 hindsight (if you’ll pardon the terrible pun) Google Glass was partly responsible for kickstarting a wave of innovative new AR startups. Unlike Google, these companies focused solely on AR’s potential for enterprises.

One example is the Canadian company NGrain, whose solutions have been implemented in several major companies, including Lockheed Martin and Boeing.

Lockheed has used AR systems in relation to its F-35 and F-22 aircraft.

Using smart glasses or tablets, engineers and service personnel can overlay graphics that show data like maintenance records or assembly instructions on top of a piece of real-world equipment. The system can also compare a digital 3D model of an aircraft with an actual aircraft to identify any potential damage.

The introduction of AR let Lockheed Martin engineers work up to 30 percent faster.

Meanwhile, at Boeing, several teams are looking at using AR systems to perform running quality control of parts for several aircraft, including the 787 Dreamliner. AR systems also allow maintenance crews to carry out full airplane checks much quicker than was previously possible.

“Traditionally, these tasks are carried out consulting manuals and using paper and pen,” says Barry Po, director of product management at NGrain. “Using AR-systems lets you overlay any needed information, while you have both hands free, and our visual inspection and damage assessment software can make it much quicker to identify potential issues. The result is that the time it takes to do a full plane check can go from several days to a matter of hours.”

Other AR systems have been used to deliver on the job training.

Using images and instructional illustrations and video, augmented reality units can show a new employee how to complete a job task without needing an introduction course.

Pipes Are Being Laid to Drive Broader Adoption

While AR in enterprises has shown impressive results, most of these come from initial pilot projects, using a limited number of devices.

AR is also facing a number of challenges, including a lack of industry standards which can make integrating AR units and software within current enterprise IT ecosystems difficult.

“Traditional software systems like ERP or WMS are not necessarily ready to integrate fully with the new technologies, like AR, that make up Factory 4.0,” Pete Wassel, CEO of Augmate, says.

AR companies have often run successful trials, instigated by a company CTO, but then hit a wall when attempting a full rollout.

Enterprise IT departments have often — and often understandably so — balked at the idea of introducing camera-equipped AR units that come with a host of potential security risks and integration headaches.

It is a situation that Augmate, along with other companies, has been working to solve.

Augmate is creating the backbone, or pipe systems, that make integration of AR into existing IT ecosystems smooth and safe. Its software systems have generated a lot of interest, not only within the AR industry, but also from individual enterprises and companies within the Internet of Things space.

AR’s Stealth Mode About to End

Enterprises are quickly becoming aware of the potential of AR, with two-thirds of companies recently interviewed by Tech Pro Research saying they were considering integrating AR solutions.

At the same time, the number of use case scenarios for AR is growing rapidly.

The same goes for industry-specific tasks in a number of fields.

For example, in health care AR can assist with information during surgery, medical inspections, in relation to specific medical procedures, or simply to call up and immediately display a patient’s relevant medical history hands-free on a pair of smart glasses.

One of the biggest use cases across industries is remote maintenance and inspection. Using AR systems, experts will be able to give advice to on-site personnel in any of a number of situations. This would not only eliminate having to fly key personnel around the world but dramatically improve response times.

“It makes it possible to create what I call ‘John Madden’ guides, where experts are able to draw instructions and point things out in real time,” Pete Wassel says.

Companies and startups have been working on AR solutions for many of these specific tasks, and many are nearing full release, after spending time in either beta or stealth mode.

At the same time, the hardware capabilities— field of vision, battery time, sturdiness, and ease of use — of AR devices are improving rapidly. Also, motion sensor and eye tracking technology are improving, allowing for more hands-free use.

In short, it is a perfect scenario for rapid growth in enterprise AR.

A Future Beyond the Factory

While the coming years are likely to see the use of AR technology in enterprises explode — its enterprise heyday will likely end when it’s supplanted by another exponential technology.

“Technology moves in cycles. I would think that AR in enterprises will have a good run of maybe 15 years,” Pete Wassel says. “After that, robots and AI will start to outcompete human workers and become the new dominant exponential technologies in enterprises.” 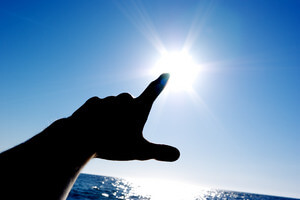 But by then, it will have likely diffused beyond enterprises and become part of our daily lives.

As a species, we build knowledge on what was discovered by previous generations. We quickly realized it was impractical to rely on memory alone to do this, so we invented the printed word.

Our accumulated knowledge grew to lexical levels and then to whole libraries. Computers and the Internet are, of course, powerful new methods of storing and recalling information.

Each iteration increases the amount of information stored and makes it more readily accessible.

Augmented reality looks like another step, seamlessly integrating the physical world with our stores of information. Imagine having the ability to call up information about or perform a range of other actions on every object around you through a layer of AR.

This is the true promise of AR beyond its near-term enterprise sweet spot.

The ability to right-click on reality.