Visit Singularity Hub for the latest from the frontiers of manufacturing and technology as we bring you coverage of Singularity University’s Exponential Manufacturing summit. ​

If you’ve been staying on top of artificial intelligence news lately, you may know that the games of chess and Go were two of the grand challenges for AI. But do you know what the equivalent is for robotics? It’s table tennis. Just think about how the game requires razor sharp perception and movement, a tall order for a machine.

As entertaining as human vs. robot games can be, what they actually demonstrate is much more important. They test the technology’s readiness for practical applications in the real world—like self-driving cars that can navigate around unexpected people in a street.

Though we used to think of robots as clunky machines for repetitive factory tasks, a slew of new technologies are making robots faster, stronger, cheaper, and even perceptive, so that they can understand and engage with their surrounding environments. Consider Boston Dynamic’s Atlas Robot, which can walk through snow, move boxes, endure a hefty blow with a hockey stick by an aggressive colleague, and even regain its feet when knocked down. Not too long ago, such tasks were unthinkable for a robot.

Power is indispensable for robotic systems, so improved power­—whether better battery storage or greater efficiency—is a massive exponential driver in robotics. Lipson explained, “Devices now use less power, and can store more power per kilogram. It’s creating a doubling [of the] exponential trend in power use.”

Computers used in robots are faster, cheaper, and more energy efficient than ever before. For example, microprocessors in machine motors generate significantly more power-per-unit (Watts) than their previous generations.

New materials have the potential to change how robots are built as well as which tasks they can perform. Soft robotics has already been shown to be successful for developing robots for aquatic environments.

Recently, a team of scientists developed a muscle-like material stronger than human muscle yet soft enough to be easily carved and manipulated. These kinds of new materials are being developed for prosthetics, but could be used to develop new robotic designs previously not possible.

Computing devices are becoming smaller, easier to use, cheaper, and more accessible. “A one gigahertz computer is now $35,” said Lipson. “You can use it to do almost anything, and they’re becoming smaller and smaller.” As the technology becomes cheaper, it’s also entering the hands of younger generations. Students in middle school are now building robots that, only a few years ago, were considered PhD worthy—and universities are struggling to keep up.

Additionally, the DIY revolution is breaking down price barriers in traditional manufacturing. Manufacturing machines that once cost tens of thousands of dollars are now funded on Kickstarter for a fraction of the price. Priced at less than $2,000, Makerarm raised nearly half a million dollars and is the first complete digital fabrication robotic arm that mounts to a desktop.

With new technologies like 3D printing, the speed of manufacturing robots is itself accelerating. Companies can 3D print full robots and their parts in condensed production timeframes, and therefore experiment with new designs faster. This allows companies to create more versatile and organic shapes with key features like better strength-to-weight ratio, such as this UAV designed to mimic the wings of insects and bats that can flap and hover.

According to Lipson, 3D printed internal parts such as actuators, muscles, and batteries are also game changing for the industry. “All of these things will allow us to make robots that are not just bolted together parts, but more organic, interesting, and capable systems.”

Though the robotics industry has had fast computers and sensors for some time, it lacked the right algorithms to make sense of all of the data being accumulated. But times have changed. 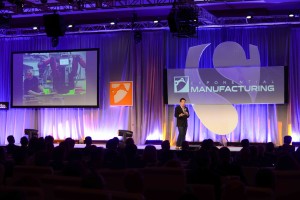 “The artificial intelligence that’s behind the scenes is allowing us to endow robots with the ability to see and understand what is happening around them,” said Lipson.

In addition, advanced machine learning algorithms are enabling robots to be more autonomous and able to respond and adapt to complex, organic situations—a challenging prospect for robots relying on human programming. This opens up a slew of opportunities for manufacturing facilities, which are filled with unstructured environments that require quick, adaptive responses.

What do these developments mean for the future of manufacturing?

Lipson envisioned that together these five exponential trends could transform manufacturing plants entirely. Imagine a factory that isn’t operated by individual robots, but by one cloud-connected system, where all machines are constantly communicating, learning, and growing as a single fluid system—a system that could learn to simulate scenarios and autonomously recover from malfunction.

“What one robot knows, it will share with all of the other robots,” said Lipson. “Manufacturing robots doing inspection and working in factories will gain the experience of a thousand lifetimes, and this accelerated learning will compound all the previous trends.”

Join the conversation in real-time on Twitter with @SingularityHub and @xmanufacturing, or tweet me directly to let me know your thoughts @DigitAlison.