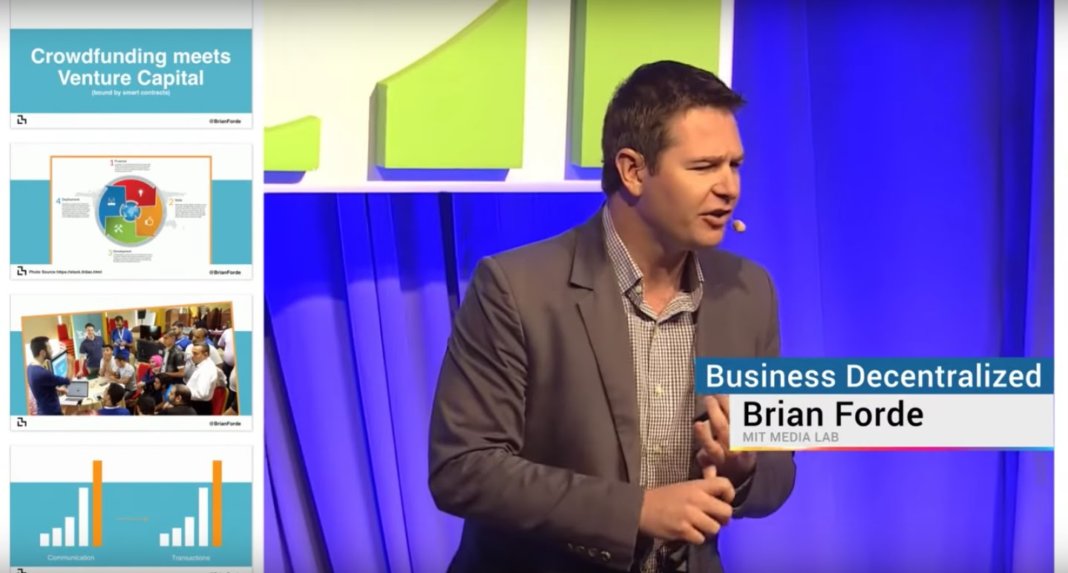 Exponential Finance celebrates the incredible opportunity at the intersection of technology and finance. Watch live as hundreds of the world’s leading investors, entrepreneurs and innovators gather in New York to define the future of the way we do business.

In Bitcoin’s early years computer scientists and early adopters were running the show. Now, a new community of academics, entrepreneurs, and economists, are working with cryptocurrencies and blockchain to bring the technology to a new set of diverse applications.

From building peer-to-peer networks for secure data computation and storage to decentralized content management systems that give patients access to health-care records across hospital databases, blockchain and digital currencies are starting to rewrite the rules of the 21st century transaction.

Brian Forde, director of digital currency at MIT Media Lab’s Digital Currency Initiative and former senior advisor for mobile and data innovation at the White House, is at the heart of this work. Forde believes that, in time, blockchain and digital currencies will impact society to the same degree the Internet has.

Forde is particularly concerned with the implications of digital currencies in developing countries, where factors like costly third parties, proof of credit, and lack of credit card infrastructure block many from making basic financial transactions.

Forde is speaking this week at Singularity University’s Exponential Finance Summit, and in this interview, he explains how digital currencies could allow developing nations to “leapfrog” current tech infrastructure and shows where the technology stands and where it may be heading.

What is a digital currency application that’s being developed at MIT (or external to MIT) that you’re most excited about?

There are a lot of great digital currency research projects being worked on at MIT. Three projects that we’ve publicly talked about are MedRec, Enigma, and academic digital certificates.

MedRec is built on a private Ethereum network and is a decentralized content-management system for patients’ health-care data, which empowers patients to have access to their records across health-care providers. The average American has 16 doctors in their lifetime, which means you probably have 16 different healthcare records in siloed databases. This is a great example of how you might create a protocol to unify those records and share the combined data with your doctors or family members.

Enigma is a peer-to-peer network being built by MIT students that uses secure, multi-party computation to enable different parties to jointly store and run computations on data while keeping the data completely private. This will enable developers to build “privacy by design,” end-to-end decentralized applications, without a trusted third party. This is a great example of how you can reap the benefits of sharing your data while maintaining your privacy.

Verifying certificates (like university degrees) can be a slow, complicated, and unreliable process. A group in the MIT Media Lab is creating a digital infrastructure for certifications, Digital Certificates, in order to improve this burdensome analog process. This is a great example of how to quickly and digitally verify academic credentials for potential employers or for grad school applications.

How can digital currencies help developing nations “leapfrog” their current tech infrastructure over the next 10 years?

Most developed nations have a strong network of credit card point of sale devices and relatively easy access to ATMs. In developing nations, credit and debit card infrastructure is less developed as is the issuance of cards.

If you think about it, it’s a bit ridiculous that two people with smartphones in their pockets have to take a piece of plastic out of their wallet, connect a dongle to their phone to transact, and then pay up to a 3.5% fee for the pleasure.

Having peer-to-peer transactions, free of dongles, free of plastic, with significantly lower transaction fees, and without the requirement of having a bank account deemed creditworthy, makes a lot more sense.

This can be done with smartphones or feature phones and smartphone adoption and cell coverage is increasing rapidly in developing countries.

You’ve compared the potential impact of blockchain to the impact that the Internet has had on society. For the global economy, what might it look like once the technology begins to disrupt traditional financial services and markets?

An article in The Atlantic asks the question, “Is Bitcoin really the best way to think about establishing a digital commons for financial transactions?” What’s your stance on this? How can Bitcoin move past its early struggles?

Like any emerging technology, there are an abundance of challenges that may impact the success of Bitcoin and other cryptocurrencies. These challenges include scalability, regulation, adoption, among others.

Early on, the people working on advancing bitcoin were mostly computer scientists and libertarians. Since then, the community has dramatically expanded to include a more diverse set of people drawing upon their unique set of experiences and developing new ways to use the technology.

Ultimately, we need to continue to increase the diversity of people working on cryptocurrencies while supporting the original folks who have an unparalleled understanding of the limits of the technology.

There’s a lot of media hype around security and privacy concerns with cryptocurrencies. What is a real one that we should be focusing on?

Similarly, the bitcoin blockchain, for example, is the most secure blockchain in the world. When we hear about security breaches, similar to a company’s database being compromised, the cryptocurrency company needs to improve their security.

Mining bitcoin, which is kind of like payment processing and validation, secures the blockchain. The most important aspects to keep an eye on are the quantity, diversity, and compute power—or “hash rate”—of independent miners competing to do this every 10 minutes.

The greater the diversity, quantity and compute power, the lower the likelihood that the bitcoin blockchain ledger can be compromised. Muneeb Ali from Blockstack Labs wrote a good blog post asking whether Bitcoin is bigger than Google.