The Octobot Is Just the Beginning for Soft Robotics 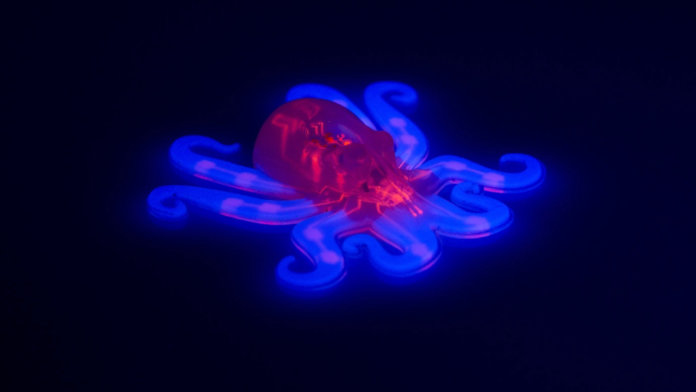 Roboticists have long turned to nature for inspiration, but their creations have generally been conspicuously un-lifelike. Now, breakthroughs in the design and manipulation of soft materials have allowed them to start replicating the remarkable abilities of some of nature’s squishier creations.

In 2004 the number of academic papers on soft robotics was close to zero, according to a new review of the field published in the inaugural edition of Science Robotics last week (Dec. 6). That figure has soared to close to 1,000 today, demonstrating the rapid advances in the field.

This has been driven by pioneering work between 2009 and 2012 that solved some of the fundamental challenges facing the field, such as actuation, sensing, modeling and control. By 2016 this had led to the world’s first completely soft autonomous robot: the Octobot, powered by a combination of pneumatics and chemistry rather than electronics.

It is fitting that this robot was modeled on an octopus, as this is where the field really started. “With a completely boneless body, an octopus can stretch and stiffen with enough strength for grasping, manipulation, locomotion, and swimming, thus providing an ideal model for new principles for the actuation and control of soft materials,” say the authors of the review.

Some of the earliest incarnations were arms inspired by their tentacles, such as the OctArm, which combined pneumatics and a battery of sensors to investigate narrow spaces and grasp objects of different sizes and shapes. These kinds of flexible appendages are known as muscular hydrostats and are widespread in nature – they include both elephant trunks and tongues.

Combining this design principle with electroactive polymers, which change size or shape when stimulated by an electric field, pneumatic artificial muscles and shape memory alloys were two of the early breakthroughs for the field that helped solve the problem of actuation in soft robotics, according to the authors.

Building on this, the development of the Pneu-Net approach, in which carefully-designed networks of pneumatic channels and chambers allow more complex motion, greatly increased the control roboticists have over their soft-bodied creations. Another widely-used and foundational technology allowed roboticists to vary the stiffness of soft appendages by applying a vacuum to granular material encased in an elastic membrane.

These seminal advances have helped accelerate the field, and the capabilities of soft robots are now improving rapidly, often in unusual directions.

As the authors note, “Abilities attained by soft robots are not just different ways to perform usual robot functions, such as grasping or locomotion; they are capabilities for performing actions, such as squeezing, stretching, climbing, and growing, that would not be possible with an approach to robot design based on rigid links only.”

Notable examples include Stanford’s Stickybot, which uses a rubber-like material with tiny polymer hairs to mimic the gecko’s ability to climb smooth vertical surfaces. Soft robotic walkers from George Whitesides’ lab at Harvard have demonstrated the ability to squeeze through small crevices and withstand everything from being crushed to exposure to flames.

Soft robotic hands can manipulate objects in their grasp with almost human-like control, while the STIFFFLOP manipulator combines the ability to bend in every direction, elongate and vary its stiffness. This allowed it to carry out the world’s first soft-robotic surgery on a human body (albeit a cadaver).

Perhaps most excitingly, soft robotics holds the possibility of mimicking some of the fundamental biological processes of animals, not just their motions. Researchers in Italy have created robots inspired by plant roots that can move through soil by “growing” using additive manufacturing.

Diels-Alder polymers, which form elastic networks at room temperature but become viscous gels above 90°C, have introduced self-healing properties to soft-robotic actuators. The use of temperature-dependent adhesives called thermoplastics have allowed parts to be detached and reattached, making it possible to completely reconfigure or extend a soft robot’s body.

Soft robotics doesn’t come without its challenges, though. The authors point out that soft materials are hard to shape, as they can’t be machined, sculpted or forged like those used in conventional robotics. There is also a need for better understanding of the highly dynamic properties of these materials and how they interact with control systems and the environment.

It’s telling that, in nature, fully soft animals tend to be small or aquatic, while most combine soft tissue with a hard skeleton. This suggests most future robots are likely to incorporate both soft and rigid elements, which will require the ability to integrate many different materials. Emerging fabrication technologies like micromolding, soft lithography and multi-material embedded 3D printing that can work with a mix of hard and soft materials are already making this possible.

Advances in flexible and stretchable electronics are also making it easier to imbue soft robots with sensing capabilities. Machine learning and evolutionary computing strategies are helping solve the challenges of modeling the complex nonlinear behaviors of soft bodies for both simulation and control.

“The use of soft materials and variable stiffness technologies in robotics represents an emerging way to build new classes of robotic systems, with new abilities that are expected to interact more effectively with natural, unstructured environments and with humans,” the authors write in their conclusion.

“The scientific challenges ahead for soft robotics are further developing these lifelike abilities to change shape, stiffen, grow, self-heal, develop, and evolve. We envisage abilities for robots to adapt not only their behavior, but also their morphology, and technologies and techniques for task-adapted morphologies.”