When the Worst Happens, These Amazing Robots Will Come to the Rescue 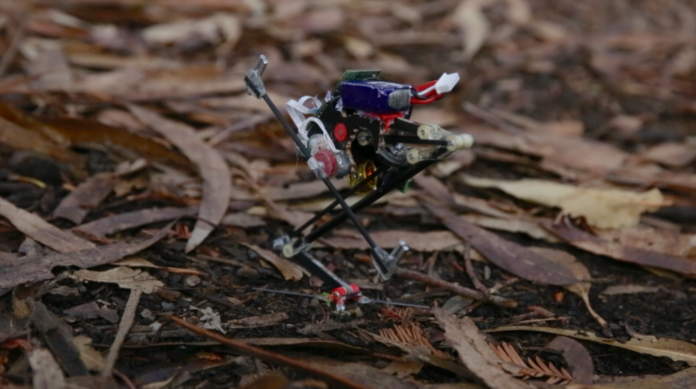 The attacks of September 11, 2001, will go down in American history for many reasons—the deaths of nearly 3,000 people chief among them.

A footnote in that particular history book is of interest to us here: 9/11 was the first time robots were used in a real search and rescue effort in the United States. That bit of unofficial history comes from Robin Murphy, director of the Center for Robot-Assisted Search and Rescue (CRASAR) at Texas A&M University, and a leading expert in the field.

In the 15 years since then, roboticists have designed all manner of machines to help mobilize rescue efforts or map disaster areas. There are small robots that can jump high and biobots—bug cyborgs—that can scurry through rubble. Some are humanoid-shaped, while others resemble small Mars rovers. A handful have been deployed into real-life scenarios, while many are still under development.

In the book Robotics for Future Presidents, Murphy emphasizes the role that robotics researchers play in disaster response: “Me and my colleagues are researchers in robotics, not disaster responders. Our job is to empower the responders with rescue robots that are easy to use and effective. Rescue robots don’t replace people or dogs. They go to places where people or dogs can’t go and assist responders in innovative ways.”

One of the more recent innovations involves not strictly robots but cyborgs—and not of the two-legged variety.

Researchers at North Carolina State University have created insect cyborgs they can control remotely. Now they are betting the bugs will prove to be valuable cartographers with the assistance of an unmanned aerial vehicle or UAV. 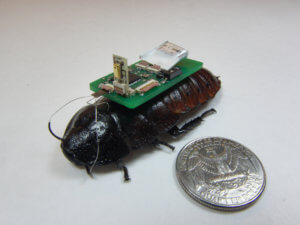 “The idea would be to release a swarm of sensor-equipped biobots—such as remotely controlled cockroaches—into a collapsed building or other dangerous, unmapped area,” says Edgar Lobaton, an assistant professor of electrical and computer engineering at NC State, in a press release about two papers describing the work.

The technology developed by Lobaton and colleagues would allow the biobots to move freely within range of a beacon carried aboard a UAV. Radio signals from the biobots are fed into a program that translates the sensor data from their movements into a map of the environment in which the bugs were released.

Lobaton’s work focused on the development of algorithms for mapping using multiple biobots. He says by email that one of the biggest challenges is that typical strategies for determining position, such as GPS or visual sensors, are not well-suited for the biobot swarm.

“This is why we had to develop a new methodology that only depends on weak localization information between the agents,” he says, referring to the insect cyborgs. “In particular, we only use encounter information between them whenever they get within a specific range of each other. This led to the development of a new framework to manage this type of scenario.”

Duncan Haldane at the University California, Berkeley, developed the world’s highest-jumping untethered robot, modeled on the galago, a nocturnal primate in Africa known for its amazing vertical leap. A visit to a FEMA search and rescue training site inspired the robot, nicknamed SALTO (saltatorial locomotion on terrain obstacles), which is capable of a standing jump up to one meter.

“After seeing how challenging it would be to move rapidly across an urban disaster site, I wanted to figure out some new strategies for robots of any scale that would enable that motion,” says Haldane, whose work recently appeared in the inaugural issue of Science Robotics.

Biology was his guide: specialized jumpers have a “super-crouch posture, a leg configuration that allows them to stay down for longer, letting their muscles store energy in their stretchy tendons, which is later released to produce high-power jumps,” he says.

“We built a single degree for freedom leg mechanism that uses this idea—new to robotics—and showed that we can produce 2.94 times more jumping power than would have been possible without the leg mechanism,” he explains by email. “Building the leg was hard, and we actually developed new methods for designing linkages to do it.”

Researchers from other parts of the world are developing other types of robots with search and rescue in mind.

For example, a team of Italian researchers is developing Walk-Man. It’s not a retro version of the now-obsolete portable music player, but a nearly two-meter-tall robot meant to be a full-fledged member of a SAR team.

Euronews reported that Walk-Man has joints and motions similar to a human body, with hands capable of powerful manipulations. It is reportedly fitted with a stereo vision system and a rotating 3D-laser scanner. Like Haldane, Italian scientists took some clues from nature.

“Many principles that exist in biology have given us inspiration on how [we could design] a robot,” research engineer Ioannis Sarakoglou tells Euronews, explaining that Walk-Man relies largely on gravity rather than energy to move.

Coming to the rescue

Murphy’s teams and their robots have responded to nearly 50 disasters in a dozen countries since 9/11, including Hurricane Katrina and the Crandall Canyon Utah mine collapse. Hurricane Katrina was the first time an unmanned aerial vehicle was used in disaster response. Now UAVs are a key tool for responders needing to get a bird’s eye view of a disaster scene.

The hope, Murphy says, is to accelerate the adoption and improve the use of robots in disasters through RWB. The goal would be to put Roboticists Without Borders out of business by 2025, she adds.

“Robots can make a disaster go away faster,” Murphy says. “Look for the robots, because robots are coming to the rescue.”