Quantum Computers Will Analyze Every Financial Model at Once 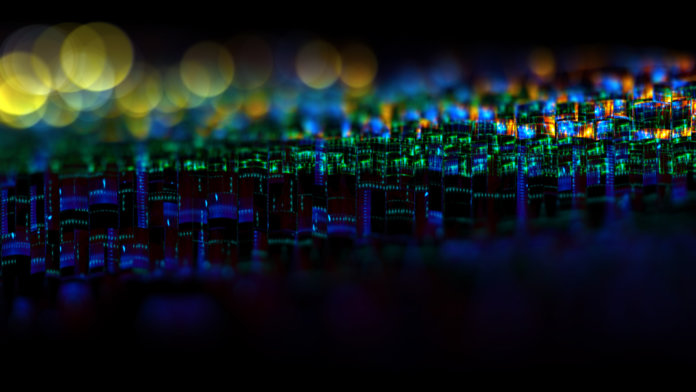 In the movie Office Space, Peter Gibbons has a stroke of genius. Confronted with the utter mundanity of a life slaving away at his office park software company, he convinces his friends to make a computer virus to skim a fraction of a cent off transactions into a shared bank account.

This, of course, goes horribly wrong. But the concept is actually pretty solid.

In the real world, where there are literally billions of transactions crisscrossing the globe every day, you can make a big profit buying and selling securities whose prices barely differ.

But here’s the key. You have to be fast. Inhumanly so. Enter physics and computers.

Computerized high-frequency trading was born from a collision of rapidly growing computing power and an influx of math and physics PhDs into finance. These wonks worked out complex quantitative buy-sell strategies, built them into algorithms, and set their software loose.

While the practice is nothing if not controversial—and there are quantitative strategies that work over longer time frames too—its impact on the market is undeniable. In any given year, high-frequency trading is responsible for up to half or more of all trades. And of course, notoriously, such algorithmic trading was also involved in 2010’s infamous “Flash Crash.”

But all this is only the beginning of how physics and computers can flip finance upside down.

At Singularity University’s Exponential Finance Summit this week, Andrew Fursman said quantum computers, which harness nature’s most basic laws, are coming sooner than you think. And while digital computing was an evolution, quantum computing will be a revolution. 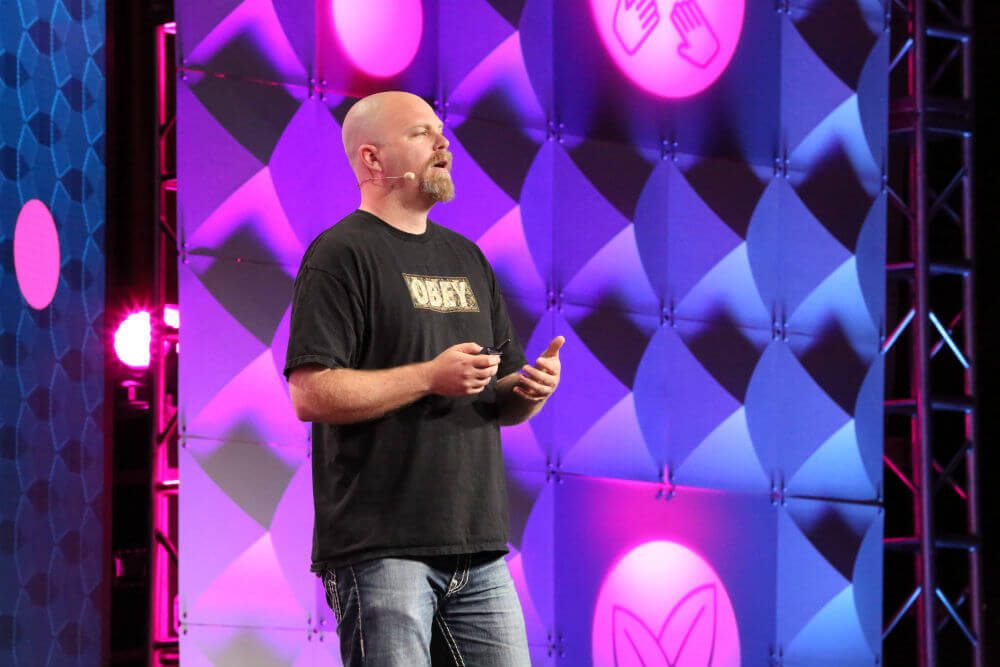 Quantum computing, he said, is just in its earliest stages, more akin to the hulking special-purpose computers of the 40s and 50s instead of the sleeker personal digital machines of recent decades. But he thinks it’s about to get practical, and it’ll pay dividends to those paying attention.

“In finance, computing power is really a bit of an arms race,” Fursman said. “And as you all know, in many of these situations, it’s winner takes all.”

The next revolution has been a long time coming. It began with physicist Richard Feynman.

When modern digital computers were just gaining momentum, Feynman looked far down the road—he was a genius theorist after all—and noted the most powerful computers would not be digital, they’d be quantum. That is, they’d harness the laws of nature to compute.

It’s counterintuitive to think of the world as a computer, said Fursman, but it’s an instructive analogy if you want to grasp the speed and simultaneity of quantum computers.

Complexity is nothing to nature. Just imagine how quickly and effortlessly glass breaks, he said.

In far less time than it takes to blink your eye, the laws of nature instruct the atoms in the glass to fracture into a massively complex spider web. Not unlike a computer, the laws of physics are the underlying logic allowing the glass to “compute” its complex demise in an instant.

Quantum computers similarly harness nature’s power to compute. Instead of using 1s and 0s to calculate things, they use the rules of quantum mechanics to compute with 1s, 0s, and both simultaneously. This means they can rapidly solve massively complex problems.

[Go here to learn more about how quantum computers work.]

But today’s machines, like D-Wave’s adiabatic quantum computers, aren’t like your laptop, which is what’s called a universal computer due to its ability to do many tasks. Instead, quantum computers today are specialized, complicated, difficult to program, and expensive.

Fursman thinks we’ll get universal quantum computers in future, but well before then, in something like three to five years, he thinks early quantum computers will get practical. And because they can do things no other computer can, they’ll be powerful.

Consider building a portfolio out of all the stocks in the S&P 500, Fursman said. Given expected risk and return at various points in time, your choice is to include a stock, or not. The sheer number of possible portfolio combinations over time is mindboggling.

In fact, the possibilities dwarf the number of atoms in the observable universe.

To date, portfolio theory has necessarily cut corners and depended on approximations. But what if you could, in fact, get precise? Quantum computers will be able to solve problems like this in a finite amount of time, whereas traditional computers would take pretty much forever.

The work is already underway to make this possible.

Fursman noted a paper written by Gili Rosenberg, Poya Haghnegahdar, Phil Goddard, Peter Carr, Kesheng Wu, and Marcos López de Prado in which they outline a new way to solve for an optimal portfolio. Instead of finding the best portfolio at discrete times in the future, they outline a way to find the best portfolio overall through time. Such a portfolio would reduce the transaction costs of rebalancing portfolios and potentially save the industry billions. 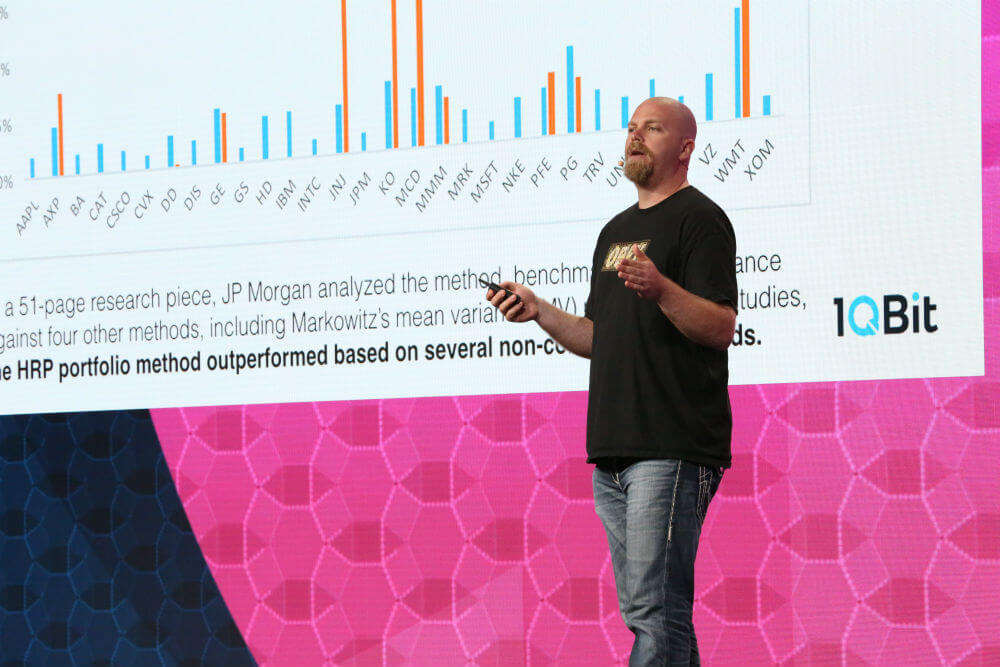 To be clear, this isn’t ready for prime time yet. But Fursman thinks it will be shortly. The key? Their proposed portfolio optimization method is compatible with existing quantum computers. Specifically, they looked at D-Wave’s adiabatic machines, and according to the paper, they believe it can scale up in complexity as the underlying technology improves.

“It’s something that has real ability to impact what’s possible within your industry and to make money doing all the things you already do—but in completely new ways,” Fursman said.

Exponential Finance, according to Fursman, is a bit ahead of the curve. The event has focused on the possibility of quantum computing in finance for the last several years.

But now, it’s poised to make an impact. Google recently announced they expect to achieve “quantum supremacy” by the end of this year. That means they’ll have shown a quantum computer capable of solving a problem no conventional computer can.

Fursman thinks the slowing of Moore’s Law may be lulling some into complacency. Whereas at one point you could barely keep pace, even if you bought a new computer every year; these days, the computer you bought four years ago is basically still able run whatever you want today.

But for businesses, the pace of progress is about to speed up again.

“The quantum computing industry [today] is just [the] spark. It’s just the very, very beginning of what’s going to be possible,” Fursman said. “Those sparks are going to turn into a huge explosion, and all of a sudden, you’re going to be faced with incredible amounts of computing capabilities that directly tackle the types of problems most relevant to what you’re doing.”

This isn’t going to take 20 years, he said, or even ten years. It’ll be here in three to five years. So, now is the time to start thinking about what quantum will do for you.