Why Interstellar Travel Will Be Possible Sooner Than You Think 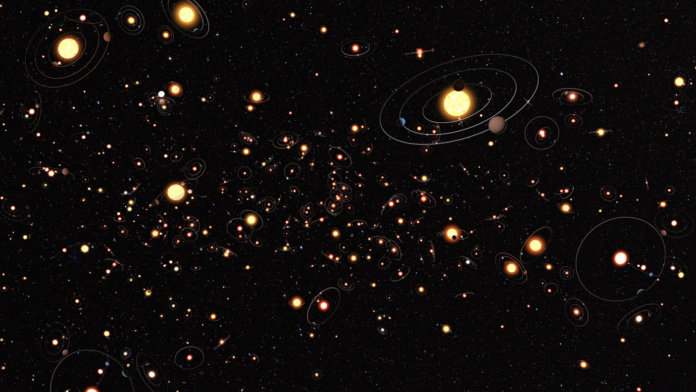 The term “moonshot” is sometimes invoked to denote a project so outrageously ambitious that it can only be described by comparing it to the Apollo 11 mission to land the first human on the Moon. The Breakthrough Starshot Initiative transcends the moonshot descriptor because its purpose goes far beyond the Moon. The aptly-named project seeks to travel to the nearest stars.

The brainchild of Russian-born tech entrepreneur billionaire Yuri Milner, Breakthrough Starshot was announced in April 2016 at a press conference joined by renowned physicists including Stephen Hawking and Freeman Dyson. While still early, the current vision is that thousands of wafer-sized chips attached to large, silver lightsails will be placed into Earth orbit and accelerated by the pressure of an intense Earth-based laser hitting the lightsail.

After just two minutes of being driven by the laser, the spacecraft will be traveling at one-fifth the speed of light—a thousand times faster than any macroscopic object has ever achieved.

Each craft will coast for 20 years and collect scientific data about interstellar space. Upon reaching the planets near the Alpha Centauri star system, an the onboard digital camera will take high-resolution pictures and send these back to Earth, providing the first glimpse of our closest planetary neighbors. In addition to scientific knowledge, we may learn whether these planets are suitable for human colonization.

The team behind Breakthrough Starshot is as impressive as the technology. The board of directors includes Milner, Hawking, and Facebook co-founder Mark Zuckerberg. The executive director is S. Pete Worden, former director of NASA Ames Research Center. A number of prominent scientists, including Nobel and Breakthrough Laureates, are serving as advisors to the project, and Milner has promised $100 million of his own funds to begin work. He will encourage his colleagues to contribute $10 billion over the next several years for its completion.

While this endeavor may sound like science fiction, there are no known scientific obstacles to implementing it. This doesn’t mean it will happen tomorrow: for Starshot to be successful, a number of advances in technologies are necessary. The organizers and advising scientists are relying upon the exponential rate of advancement to make Starshot happen within 20 years.

Here are 11 key Starshot technologies and how they are expected to advance exponentially over the next two decades.

An exoplanet is a planet outside our Solar System. While the first scientific detection of an exoplanet was only in 1988, as of May, 1 2017 there have been 3,608 confirmed detections of exoplanets in 2,702 planetary systems. While some resemble those in our Solar System, many have fascinating and bizarre features, such as rings 200 times wider than Saturn’s.

The reason for this deluge of discoveries? A vast improvement in telescope technology.

Just 100 years ago the world’s largest telescope was the Hooker Telescope at 2.54 meters. Today, the European Southern Observatory’s Very Large Telescope consists of four large 8.2-meter diameter telescopes and is now the most productive ground-based facility in astronomy, with an average of over one peer-reviewed, published scientific paper per day.

Meanwhile, in space, NASA’s Kepler spacecraft is designed specifically for this purpose and has already identified over 2,000 exoplanets. The James Webb Space Telescope, to be launched in October, 2018, will offer unprecedented insight into whether exoplanets can support life. “If these planets have atmospheres, [JWST] will be the key to unlocking their secrets,” according to Doug Hudgins, Exoplanet Program Scientist at NASA headquarters in Washington.

The Starshot mothership will be launched aboard a rocket and release a thousand starships. The cost of transporting a payload using one-time-only rockets is immense, but private launch providers such as SpaceX and Blue Origin have recently demonstrated success in reusable rockets which are expected to substantially reduce the price. SpaceX has already reduced costs to around $60 million per Falcon 9 launch, and as the private space industry expands and reusable rockets become more common, this price is expected to drop even further.

Each 15-millimeter-wide Starchip must contain a vast array of sophisticated electronic devices, such as a navigation system, camera, communication laser, radioisotope battery, camera multiplexer, and camera interface. The expectation we’ll be able to compress an entire spaceship onto a small wafer is due to exponentially decreasing sensor and chip sizes.

The first computer chips in the 1960s contained a handful of transistors. Thanks to Moore’s Law, we can now squeeze billions of transistors onto each chip. The first digital camera weighed 8 pounds and took 0.01 megapixel images. Now, a digital camera sensor yields high-quality 12+ megapixel color images and fits in a smartphone—along with other sensors like GPS, accelerometer, and gyroscope. And we’re seeing this improvement bleed into space exploration with the advent of smaller satellites providing better data.

For Starshot to succeed, we will need the chip’s mass to be about 0.22 grams by 2030, but if the rate of improvement continues, projections suggest this is entirely possible.

The sail must be made of a material which is highly reflective (to gain maximum momentum from the laser), minimally absorbing (so that it is not incinerated from the heat), and also very light weight (allowing quick acceleration). These three criteria are extremely constrictive and there is at present no satisfactory material.

The required advances may come from artificial intelligence automating and accelerating materials discovery. Such automation has advanced to the point where machine learning techniques can “generate libraries of candidate materials by the tens of thousands,” allowing engineers to identify which ones are worth pursuing and testing for specific applications.

While the Starchip will use a tiny nuclear-powered radioisotope battery for its 24-year-plus journey, we will still need conventional chemical batteries for the lasers. The lasers will need to employ tremendous energy in a short span of time, meaning that the power must be stored in nearby batteries.

Battery storage has improved at 5-8% per year, though we often don’t notice this benefit because appliance power consumption has increased at a comparable rate resulting in a steady operating lifetime. If batteries continue to improve at this rate, in 20 years they should have 3 to 5 times their present capacity. Continued innovation is expected to be driven from Tesla-Solar City’s big investment in battery technology. The companies have already installed close to 55,000 batteries in Kauai to power a large portion of their infrastructure.

Thousands of high-powered lasers will be used to push the lightsail to extraordinary speeds.

Lasers have obeyed Moore’s Law at a nearly identical rate to integrated circuits, the cost-per-power ratio halving every 18 months. In particular, the last decade has seen a dramatic acceleration in power scaling of diode and fiber lasers, the former breaking through 10 kilowatts from a single mode fiber in 2010 and the 100-kilowatt barrier a few months later. In addition to the raw power, we will also need to make advances in combining phased array lasers.

Our ability to move quickly has…moved quickly. In 1804 the train was invented and soon thereafter produced the hitherto unheard of speed of 70 mph. The Helios 2 spacecraft eclipsed this record in 1976: at its fastest, Helios 2 was moving away from Earth at a speed of 356,040 km/h. Just 40 years later the New Horizons spacecraft achieved a heliocentric speed of almost 45 km/s or 100,000 miles per hour. Yet even at these speeds it would take a long, long time to reach Alpha Centauri at slightly more than four light years away.

While accelerating subatomic particles to nearly light speed is routine in particle accelerators, never before has this been achieved for macroscopic objects. Achieving 20% speed of light for Starshot would represent a 1000x speed increase for any human-built object.

Fundamental to computing is the ability to store information. Starshot depends on the continued decreasing cost and size of digital memory to include sufficient storage for its programs and the images taken of Alpha Centauri star system and its planets.

The cost of memory has decreased exponentially for decades: in 1970, a megabyte cost about one million dollars; it’s now about one-tenth of a cent. The size required for the storage has similarly decreased, from a 5-megabyte hard drive being loaded via forklift in 1956 to the current availability of 512-gigabyte USB sticks weighing a few grams.

Once the images are taken the Starchip will send the images back to Earth for processing.

Telecommunications has advanced rapidly since Alexander Graham Bell invented the telephone in 1876. The average internet speed in the US is currently about 11 megabits per second. The bandwidth and speed required for Starshot to send digital images over 4 light years—or 20 trillion miles—will require taking advantage in the latest telecommunications technology.

One promising technology is Li-Fi, a wireless approach which is 100 times faster than Wi-Fi.  A second is via optical fibers which now boast 1.125 terabits per second. There are even efforts in quantum telecommunications which are not just ultrafast but completely secure.

This dramatically decreasing cost of computing has now continued due largely to the presence of cloud computing. Extrapolating into the future and taking advantage of new types of processing, such as quantum computing, we should see another thousand-fold increase in power by the time data from Starshot returns. Such extreme processing power will allow us to perform sophisticated scientific modeling and analysis of our nearest neighboring star system.

Acknowledgements: The author would like to thank Pete Worden and Gregg Maryniak for suggestions and comments.