The World’s First Autonomous Ship Will Set Sail In 2018 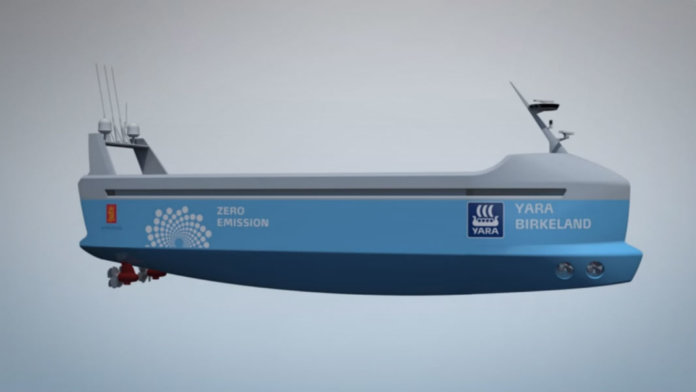 With a capacity of up to 150 shipping containers, the battery-powered ship will be small compared to modern standards (the biggest container ship in the world holds 19,000 containers, and an average-size ship holds 3,500), but its launch will mark the beginning of a transformation of the global shipping industry. This transformation could heavily impact global trade as well as the environment.

The Yara Birkeland is being jointly developed by two Norwegian companies: agricultural firm Yara International, and agricultural firm, and Kongsberg Gruppen, which builds guidance systems for both civilian and military use.

The ship will be equipped with a GPS and various types of sensors, including lidar, radar, and cameras—much like self-driving cars. The ship will be able to steer itself through the sea, avoid other ships, and independently dock itself.

The Wall Street Journal states that building the ship will cost $25 million, which is about three times the cost of a similarly-sized conventional ship. However, the savings will kick in once the ship starts operating, since it won’t need traditional fuel or a big crew.

Self-driving cars aren’t going to suddenly hit the streets straight off their production line; they’ve been going through multiple types of road tests, refining their sensors, upgrading their software, and generally improving their functionality little by little. Similarly, the Yara Birkeland won’t take to the sea unmanned on its first voyage, nor any of its several first voyages, for that matter.

Rather, the ship’s autonomy will be phased in. At first, says the Journal, “a single container will be used as a manned bridge on board. Then the bridge will be moved to shore and become a remote-operation center. The ship will eventually run fully on its own, under supervision from shore, in 2020.”

Kongsberg CEO Geir Haoy compared the ship’s sea-to-land bridge transition to flying a drone from a command center, saying, “It will be GPS navigation and lots of high-tech cameras to see what’s going on around the ship.”

Interestingly, there’s currently no legislation around autonomous ships (which makes sense since, well, there aren’t any autonomous ships, either). Lawmakers are getting to work, though, and rules will likely be set up by the time the Yara makes it first fully-autonomous trip.

The ship will sail between three ports in southern Norway, delivering Yara International fertilizer from a production facility to a port called Larvik. The planned route is 37 nautical miles, and the ship will stay within 12 nautical miles of the coast.

The United Nations’ International Maritime Organization estimates over 90 percent of the world’s trade is carried by sea, and states that maritime transport is “By far the most cost-effective way to move en masse goods and raw materials around the world.”

But ships are also to blame for a huge amount of pollution; one study showed that just 15 of the world’s biggest ships may emit as much pollution as all the world’s cars, largely due to the much higher sulfur content of ship fuel. Oddly, shipping emission regulations weren’t included in the Paris Agreement.

Besides reducing fuel emissions by being electric, the Yara Birkeland will supposedly replace 40,000 truck drives a year through southern Norway. Once regulations are in place and the technology has been tested and improved, companies will start to build larger ships that can sail longer routes.