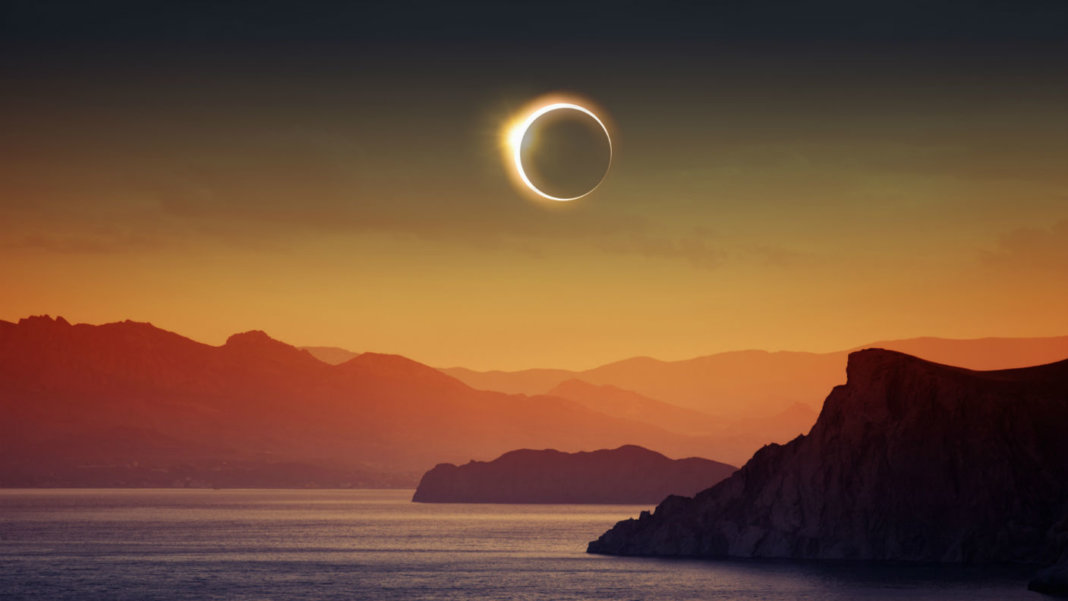 When the moon finally eclipsed the sun’s dazzling rays, I stared at the black orb in the sky with utter disbelief.

I was one among the tens of thousands camped out amongst the Painted Hills in Oregon, experiencing the celestial event of a lifetime. I’d heard from previous eclipse chasers that people have drastically different reactions to a total solar eclipse: wonder, awe or even ecstasy. But disbelief may be among the most common emotion.

The reason? A black hole in the middle of our burning sun, with a 360° sunset darkening the skies at 10AM, is something utterly beyond most people’s normal expectation of our world.

Humans perceive the world not just through senses like sight—mixed into our perception is a heavy dose of prediction. The brain actively works to fill in information to make sense of what we’re seeing—what’s the color and shape? Is it a face? Is it supposed to be there?

Most of the time, our expectations accurately match up with our senses. When the system works normally, it allows us to distinguish between what we think we’ll see from what we’re actually seeing. It even lets us accept the abnormal as the new normal.

But sometimes the system fails. This week, a new study in Science answered a question first set forth by the philosopher Rene Descartes over 300 years ago: if we can’t be sure our perception reflects the world, how can we separate illusion from reality?

As it turns out, our brains keep a running tab on reality through an internal fact-checking system. The fact-checker constantly monitors our previous expectations and predictions about the world. If the brain is overly expectant, the system reins it in.

When the fact-checker fails, the study found, the result is hallucinations.

It’s a “very elegant” study, says Dr. Georg Northoff at the University of Ottawa who was not involved in the work. The findings may point us towards faulty brain regions that produce hallucinations, and potentially new treatments for schizophrenia, bipolar and other serious psychiatric disorders.

To the late neuroscientist and prolific writer Dr. Oliver Sacks, hallucinations are a quirk of human perception that isn’t necessarily distressing.

Although we mostly associate hearing voices and other sensory illusions with mental illness, the truth is up to 5 to 15 percent of the general population experiences some type of auditory hallucinations in their lifetimes. Roughly one percent may hear those ghostly whispers or melodies quite often—they just ignore it or accept it as part of their normal lives.

It’s this one percent that caught Yale psychiatrist Dr. Albert Power’s attention. “We wanted to understand what’s common and what’s protecting people who hallucinate but who don’t require psychological intervention,” he says.

Previous studies have found that hallucinations activate the part of the brain normally responsible for processing those stimuli—an imagined “ding” fires up the auditory cortex, for example. But how hallucinations come about remained a mystery.

According to Powers, it’s all about expectation. Hallucinations arise when the brain’s prediction or belief of what should happen overrides the senses.

In an experiment devised at Yale University back in the 1890s, a group of researchers repeatedly showed their volunteers an image accompanied by a ringing sound. Eventually, the participants reported hearing the sound every time the image appeared, even though the researchers had long stopped playing it.

You may have experienced something similar before—seeing shapes in clouds and Rorschach blots, or hearing a cell phone ding or buzz only to find it shut off.

“People come to expect the sound so much that the brain hears it for them,” Powers says.

To test whether hallucinations come from an overly expectant brain, Powers and his colleagues dropped by an unusual location: their local organization of psychics. There, the team almost immediately realized the similarities between the psychics’ descriptions of their hallucinatory experiences, and those experienced by patients diagnosed with psychosis.

How loud the voices they heard, the frequency it occurred, the length and complexity were all remarkably similar, says Powers.

The team invited fifteen voice-hearing psychics to their lab. There, they applied a digitized version of the 1890 Yale experiment to them and three additional groups: patients with schizophrenia who hallucinate voices, people with psychosis but do not hear voices, and healthy controls.

The researchers trained everyone to associate an image of a checkerboard with a 1-kHz tone. Once a strong link formed, the team played with the intensity of the sound—sometimes turning it off completely—and asked the participants to press a button every time they thought they heard the tone.

If they felt confident, the researchers instructed, press the button down hard; otherwise just give it a light tap.

All the while, the team used magnetic resonance imaging (MRI) to capture the participants’ entire brains at work, taking a snapshot of activated networks as they made their choice.

If expectation is driving perception in hallucinations, then people who hear voices are more prone to “believing” in the link: that the visual must be accompanied by the tone.

That’s exactly what they found: the two voice-hearing groups were roughly five times more likely to report hearing a nonexistent tone than the controls. They were also 28 percent more confident in their assertion that there was a sound.

Their prior belief about the association was so strong that it drove the auditory hallucination, the researchers say.

When the team added additional trials without the tone, the psychics and controls eventually tweaked their prediction model: they no longer associated the checkerboard with the tone, and stopped reporting sounds that weren’t there.

In contrast, the groups with mental illness had trouble updating their priors. Despite increasing evidence that the tone was no longer present, both groups clung to their belief that the ghostly sound hung around.

“People with a psychotic illness find their perceptions really difficult to abandon even when everybody around [them] agrees that what [they] are hearing is not actually happening,” says study author Dr. Philip Corlett. “The results match closely with what we see in the clinics,” he adds.

Both psychics and patients with schizophrenia showed abnormally low activity in several brain regions known to monitor our models of the world. The stronger reported hallucinations, for example, correlated with weaker activity in the cerebellum, a small crinkled apple-shaped brain region that sits near the base of the skull.

Normally involved in planning and coordinating movements, the cerebellum constantly makes predictions about the world and how our bodies interact with it.

A handful of recent studies suggest that the cerebellum may also play a role in memory and other higher cognitive functions. However, this study is one of the first to reveal a fact-checking role for the “little brain.”

“Doing this kind of research, particularly with non-clinical voice hearers, is really key for showing how what we believe about the world, what we expect to hear can really shape our sensory experiences,” says Dr. Ben Alderson-Day at Durham University who was not involved in the study. Alderson-Day recently showed that people who hear voices have brains that are more primed to look for meaningful patterns in ambiguous situations, further giving weight to the idea that our perception heavily relies on priors.

If the theory holds up over time, the researchers believe that it could trigger a field change to the way we treat—and think about—mental illness. Rather than dousing the entire brain with psychoactive medication, for example, physicians may be able to stop hallucinations by tweaking the brain’s fact-checking system with targeted brain stimulation. Psychologists may even be able help the patients re-frame their phantom voices into something less distressing.

To Powers, the major impact of his study lies in its experimental way to manipulate what the mind perceives. Future studies using similar protocols could answer why the placebo effect is so strong in some populations, or how environmental stimuli—lack of sleep or sensory deprivation—could mix fantasy with reality in otherwise healthy people.

“The power of the mind over itself is amazing,” he says. “We’re only just beginning to understand the biology behind that.”