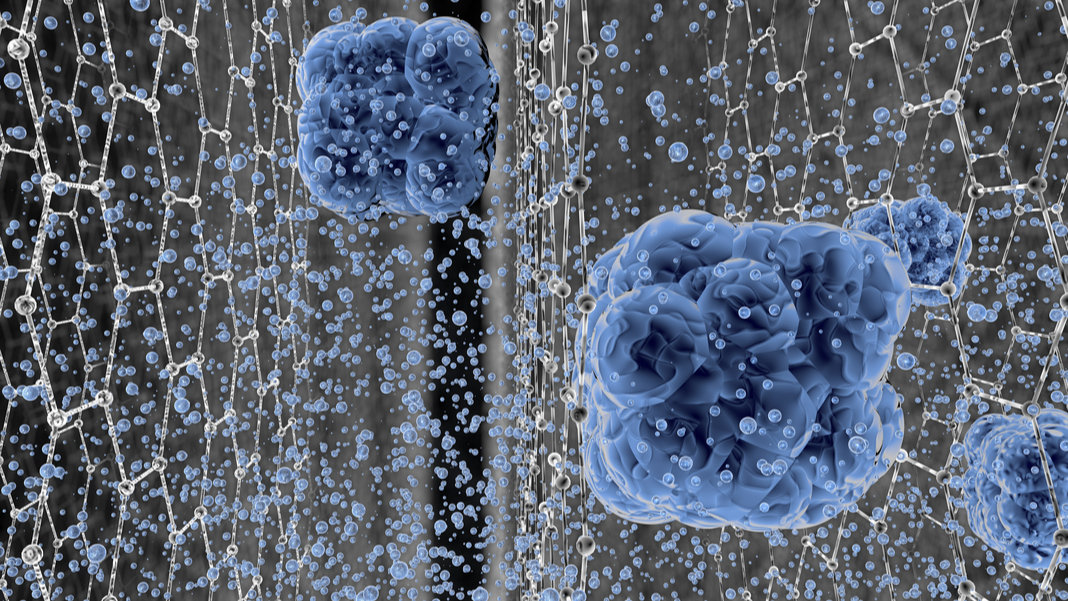 In September 2015, world leaders gathered at a historic UN summit to adopt the Sustainable Development Goals (SDGs). These are 17 ambitious targets and indicators that help guide and coordinate governments and international organizations to alleviate global problems. For example, SDG 3 is to “ensure healthy lives and promote well-being for all at all ages.” Others include access to clean water, reducing the effects of climate change, and affordable healthcare.

If you think these goals might be difficult to meet, you’re right. Reports show progress is lacking in many of the 17 categories, implying they may not be met by the target date of 2030. However, paired with progress in social and political arenas, advances in science and technology could be a key accelerant to progress too.

Just one example? Graphene, a futuristic material with a growing set of potential applications.

Graphene is comprised of tightly-knit carbon atoms arranged into a sheet only one atom thick. This makes it the thinnest substance ever made, yet it is 200 times stronger than steel, flexible, stretchable, self-healing, transparent, more conductive than copper, and even superconductive. A square meter of graphene weighing a mere 0.0077 grams can support four kilograms. It is a truly remarkable material—but this isn’t news to science and tech geeks.

Headlines touting graphene as the next wonder material have been a regular occurrence in the last decade, and the trip from promise to practicality has felt a bit lengthy. But that’s not unexpected; it can take time for new materials to go mainstream. Meanwhile, the years researching graphene have yielded a long list of reasons to keep at it.

Since first isolated in 2004 at the University of Manchester—work that led to a Nobel Prize in 2010— researchers all over the world have been developing radical ways to use and, importantly, make graphene. Indeed, one of the primary factors holding back widespread adoption has been how to produce graphene at scale on the cheap, limiting it to the lab and a handful of commercial applications. Fortunately, there have been advances toward mass production.

Last year, for example, a team from Kansas State University used explosions to synthesize large quantities of graphene. Their method is simple: Fill a chamber with acetylene or ethylene gas and oxygen. Use a vehicle spark plug to create a contained detonation. Collect the graphene that forms afterward. Acetylene and ethylene are composed of carbon and hydrogen, and when the hydrogen is consumed in the explosion, the carbon is free to bond with itself, forming graphene. This method is efficient because all it takes is a single spark.

Whether this technique will usher in the graphene revolution, as some have claimed, remains to be seen. What’s more certain is there will be no shortage of problems solved when said revolution arrives. Here’s a look at the ways today’s research suggests graphene may help the UN meet its ambitious development goals.

SDG 6 is to “ensure availability and sustainable management of water and sanitation for all.” As of now, the UN estimates that “water scarcity affects more than 40 percent of the global population and is projected to rise.”

Graphene-based filters could very well be the solution. Jiro Abraham from the University of Manchester helped develop scalable graphene oxide sieves to filter seawater. He claims, “The developed membranes are not only useful for desalination, but the atomic scale tunability of the pore size also opens new opportunity to fabricate membranes with on-demand filtration capable of filtering out ions according to their sizes.”

Furthermore, researchers from Monash University and the University of Kentucky have developed graphene filters that can filter out anything larger than one nanometer. They say their filters “could be used to filter chemicals, viruses, or bacteria from a range of liquids. It could be used to purify water, dairy products or wine, or in the production of pharmaceuticals.”

SDG 13 focuses on taking “urgent action to combat climate change and its impacts.”

Of course, one of the main culprits behind climate change is the excessive amount of carbon dioxide being emitted into the atmosphere. Graphene membranes have been developed that can capture these emissions.

Researchers at the University of South Carolina and Hanyang University in South Korea independently developed graphene-based filters that can be used to separate unwanted gases from industrial, commercial, and residential emissions. Henry Foley at the University of Missouri has claimed these discoveries are “something of a holy grail.”

With these, the world might be able to stem the rise of CO2 in the atmosphere, especially now that we have crossed the important 400 parts per million threshold.

Many around the world do not have access to adequate healthcare, but graphene may have an impact here as well.

First of all, graphene’s high mechanical strength makes it a perfect material for replacing body parts like bones, and because of its conductivity it can replace body parts that require electrical current, like organs and nerves. In fact, researchers at the Michigan Technological University are working on using 3D printers to print graphene-based nerves, and this team is developing biocompatible materials using graphene to conduct electricity.

Graphene can also be used to make biomedical sensors for detecting diseases, viruses, and other toxins. Because every atom of graphene is exposed, due to it being only one atom thick, sensors can be far more sensitive. Graphene oxide sensors, for example, could detect toxins at levels 10 times less than today’s sensors. These sensors could be placed on or under the skin and provide doctors and researchers with vast amounts of information.

Chinese scientists have even created a sensor that can detect a single cancerous cell. Further, scientists at the University of Manchester report graphene oxide can hunt and neutralize cancer stem cells.

SDG 9 is to “build resilient infrastructure, promote inclusive and sustainable industrialization and foster innovation.” Graphene-enhanced composites and other building materials could bring us closer to meeting this goal.

Recent research shows that the more graphene is added, the better the composite becomes. This means graphene can be added to building materials like concrete, aluminum, etc., which will allow for stronger and lighter materials.

Resins are also getting better thanks to the addition of graphene. Research by Graphene Flagship, the EU’s billion-euro project to further graphene research, and their partner Avanzare suggests “graphene enhances the functionality of the resin, combining graphene’s electrical conductivity and mechanical strength with excellent corrosion resistance.” Some uses for this are making pipes and storage tanks corrosion-resistant, and making stronger adhesives.

SDG 7 is to “ensure access to affordable, reliable, sustainable and modern energy for all.” Because of its light weight, conductivity, and tensile strength, graphene may make sustainable energy cheaper and more efficient.

For example, graphene composites can be used to create more versatile solar panels. Researchers at MIT say, “The ability to use graphene…is making possible truly flexible, low-cost, transparent solar cells that can turn virtually any surface into a source of electric power.”

We’ll also be able to build bigger and lighter wind turbines thanks to graphene composites.

Further, graphene is already being used to enhance traditional lithium-ion batteries, which are the batteries commonly found in consumer electronics. Research is also being done into graphene aerogels for energy storage and supercapacitors. All of these will be essential for large-scale storage of renewable energy.

Over the next decade, graphene is likely to find more and more uses out in the real world, not only helping the UN and member states meet the SDGs, but enhancing everything from touch screens to MRI machines and from transistors to unknown uses as a superconductor.

New research is being published and new patents being filed regularly, so keep an eye out for this amazing material.