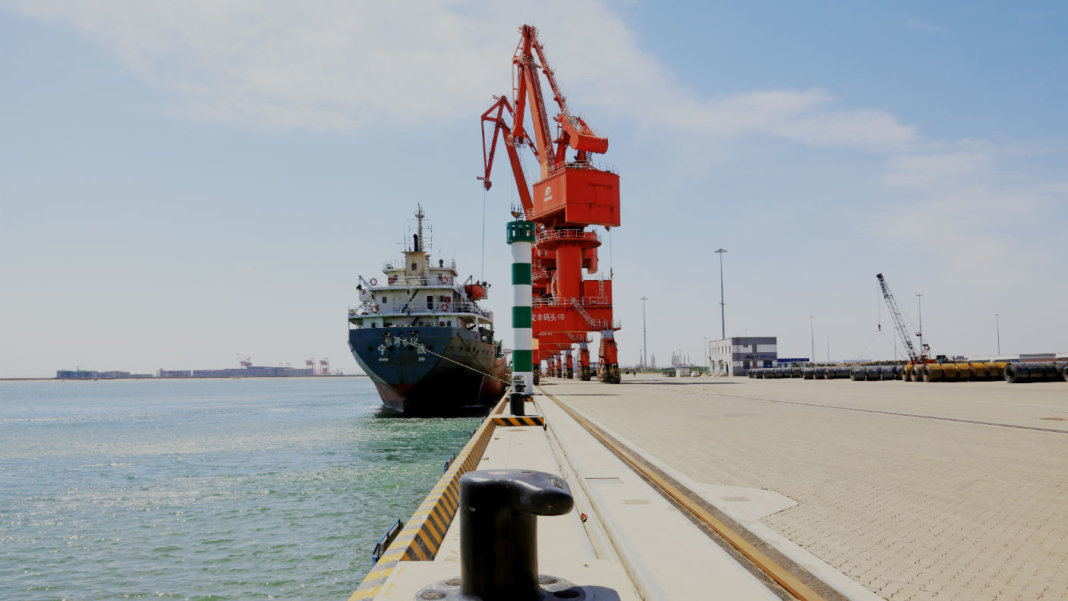 By the end of 2018, something will be very different about the harbor area in the northern Chinese city of Caofeidian. If you were to visit, the whirring cranes and tractors driving containers to and fro would be the only things in sight.

Caofeidian is set to become the world’s first fully autonomous harbor by the end of the year. The US-Chinese startup TuSimple, a specialist in developing self-driving trucks, will replace human-driven terminal tractor-trucks with 20 self-driving models. A separate company handles crane automation, and a central control system will coordinate the movements of both.

According to Robert Brown, Director of Public Affairs at TuSimple, the project could quickly transform into a much wider trend. “The potential for automating systems in harbors and ports is staggering when considering the number of deep-water and inland ports around the world. At the same time, the closed, controlled nature of a port environment makes it a perfect proving ground for autonomous truck technology,” he said.

The autonomous cranes and trucks have a big task ahead of them. Caofeidian currently processes around 300,000 TEU containers a year. Even if you were dealing with Lego bricks, that number of units would get you a decent-sized cathedral or a 22-foot-long aircraft carrier. For any maritime fans—or people who enjoy the moving of heavy objects—TEU stands for twenty-foot equivalent unit. It is the industry standard for containers. A TEU equals an 8-foot (2.43 meter) wide, 8.5-foot (2.59 meter) high, and 20-foot (6.06 meter) long container.

While impressive, the Caofeidian number pales in comparison with the biggest global ports like Shanghai, Singapore, Busan, or Rotterdam. For example, 2017 saw more than 40 million TEU moved through Shanghai port facilities.

Self-driving container vehicles have been trialled elsewhere, including in Yangshan, close to Shanghai, and Rotterdam. Qingdao New Qianwan Container Terminal in China recently laid claim to being the first fully automated terminal in Asia.

The potential for efficiencies has many ports interested in automation. Qingdao said its systems allow the terminal to operate in complete darkness and have reduced labor costs by 70 percent while increasing efficiency by 30 percent. In some cases, the number of workers needed to unload a cargo ship has gone from 60 to 9.

TuSimple says it is in negotiations with several other ports and also sees potential in related logistics-heavy fields.

For autonomous vehicles, ports seem like a perfect testing ground. They are restricted, confined areas with few to no pedestrians where operating speeds are limited. The predictability makes it unlike, say, city driving.

Robert Brown describes it as an ideal setting for the first adaptation of TuSimple’s technology. The company, which, amongst others, is backed by chipmaker Nvidia, have been retrofitting existing vehicles from Shaanxi Automobile Group with sensors and technology.

At the same time, it is running open road tests in Arizona and China of its Class 8 Level 4 autonomous trucks.

Dozens of autonomous truck startups are reported to have launched in China over the past two years. In other countries the situation is much the same, as the race for the future of goods transportation heats up. Startup companies like Embark, Einride, Starsky Robotics, and Drive.ai are just a few of the names in the space. They are facing competition from the likes of Tesla, Daimler, VW, Uber’s Otto subsidiary, and in March, Waymo announced it too was getting into the truck race.

Compared to many of its competitors, TuSimple’s autonomous driving system is based on a different approach. Instead of laser-based radar (LIDAR), TuSimple primarily uses cameras to gather data about its surroundings. Currently, the company uses ten cameras, including forward-facing, backward-facing, and wide-lens. Together, they produce the 360-degree “God View” of the vehicle’s surroundings, which is interpreted by the onboard autonomous driving systems.

Each camera gathers information at 30 frames a second. Millimeter wave radar is used as a secondary sensor. In total, the vehicles generate what Robert Brown describes with a laugh as “almost too much” data about its surroundings and is accurate beyond 300 meters in locating and identifying objects. This includes objects that have given LIDAR problems, such as black vehicles.

Another advantage is price. Companies often loathe revealing exact amounts, but Tesla has gone as far as to say that the ‘expected’ price of its autonomous truck will be from $150,0000 and upwards. While unconfirmed, TuSimple’s retrofitted, camera-based solution is thought to cost around $20,000.