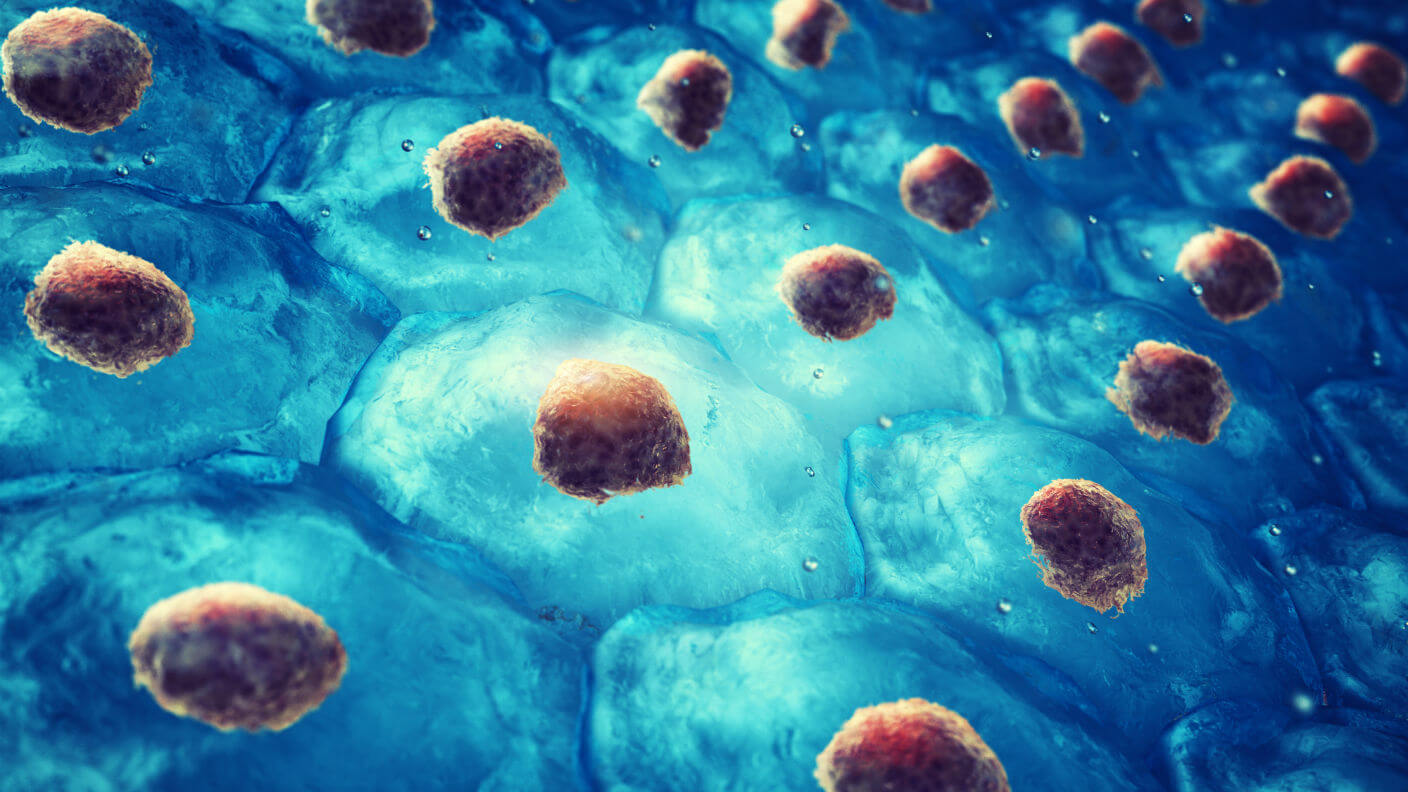 Cellular reprogramming is like the fairytale of spinning straw into gold: you take an abundant, mundane cell type, dose it with a cocktail of chemicals, and voilà—now you have an unlimited supply of therapeutic cells ready for action.

You’ve probably heard of the superstar in cellular reprogramming: induced pluripotent stem cells (iPSCs). Discovered by Shinya Yamanaka in 2006, these cells start off as skin cells, which can then be transformed into cells similar to embryonic stem cells. Without a doubt, iPSCs have revolutionized regenerative medicine (and snagged a Nobel Prize along the way). Because of their ability to develop into virtually any cell type in the body, these cells are heralded as an abundant—and less ethically challenging—source of healthy cells for transplantation.

So what’s the catch?

For one, iPSCs can take months to make and the process is expensive. Furthermore, reverting cells back to a stem cell state wipes out their history, which is sometimes useful for studying disease progression.

In essence, iPSCs are the middlemen between one cell type and another. What if we could simply take out the middleman altogether?

Enter iPSC’s up-and-coming little brother: transdifferentiation. Rather than reverting cells back to a mature stage, transdifferentiation forces one mature cell type to convert to another. It happens naturally in some animals: the nematode C. elegans, for example, have cells in their rectum that sometimes transforms into—not kidding—their brain cells.

Animal weirdness aside, transdifferentiation offers a new route to regeneration. What if we could coax blood cells into neurons to repopulate the brain after a stroke? Or use transformed skin cells to patch a degenerating brain? Because the cells come from the patient’s own body, immunorejection—the big bad in stem cell medicine—would never get to rear its ugly head.

Transdifferentiation often involves finding triggers that erase a cell’s identity and give it another. Sometimes these are small chemicals that activate a developmental pathway. More often they’re “transcription factors,” a family of proteins that grab onto DNA and changes how it translates into proteins.

Remember: all cells have (nearly) the same DNA. What causes them to become a neuron or a skin cell depends on what snippets of DNA get expressed. Transcription factors are key to this process: find the right factor cocktail, and you have a recipe for making new cells.

Transdifferentiation isn’t limited to making brain cells. But because of the brain’s limited ability to regenerate, the technology has made the most waves in the neuroscience sphere since its inception.

A few years ago, a team from Stanford University found that they could directly transform cells from the tip of a mouse’s tail into working neurons. The crux of the cellular alchemy relied on three transcription factors—delivered to the mouse by hitching a ride on a safe virus—and took less than two weeks.

A year later, the same team discovered that that addition of a fourth gene turned human fibroblast cells—the connective tissue found throughout the skin—into functional neurons. In just a few weeks, the cells began generating electrical signals and forming connections with other neurons.

Around the same time, another study found that by hijacking three transcription factors they could coax fibroblasts into dopamine cells. These cells are the first to go in Parkinson’s disease and a major focus in stem cell therapy in the neuroscience sphere.

These discoveries made neuroscientists perk up: compared to iPSCs, transdifferentiation was much faster at making functional neurons. What’s more, because they don’t go through the stem cell stage—characterized by rapid cellular division—these cells are much less likely to form tumors when implanted into tissue.

“There is hope, although no compelling evidence, that neurons generated in this way might be superior to those generated from iPSCs, thereby sidestepping the problems of using such cells,” said Dr. Michael Sendtner at the University of Würzburg at the time.

In a testament to Sendtner’s comment, a study in 2017 showed that transdifferentiation could directly convert astrocytes—abundant non-neuronal cells in the brain—into neurons in a mouse model of Parkinson’s disease. After the treatment, the mice showed improvements in their motor functions such as balance and gait.

If further optimized, the authors said, this approach could be easier for clinical therapies because we only need to deliver genes, rather than millions of fragile cells, into the brain.

A Solution To Aging?

To Dr. Rusty Gage at the Salk Institute in California, transdifferentiation isn’t limited to cell replacement therapies. Rather, it offers an unprecedented look at how neurons age as we grow older.

A pioneer in researching the brain’s stem cells, Gage published an incredible report in 2015. Taking fibroblast cells from young and older human donors, his team found that direct transdifferentiation could turn those cells into “young” and “old” neurons in terms of gene expression. This is in stark contrast to iPSCs, which reset the clock by returning the cells back to a youthful stage.

Why is this a good thing? Neuroscientists have long wondered what happens in the brain as we age, but gaining access to relevant tissue samples has always been difficult. With transdifferentiation, they can now directly examine the aging process in a dish using these “induced neurons.” For example, by comparing changes that happen to the neurons as their host grows older, scientists could tease out factors that drive aging—and potentially ways to revert it.

Since the discovery of their conversation protocol, aged induced neurons have shed light on how the mitochondria—the cell’s powerhouse—changes its energy output during the aging process, highlighting one reason why the brain is so vulnerable to aging.

Apart from maintaining their donor’s age, transdifferentiated neurons have another perk up their sleeves: they can be mass-produced.

Traditionally, cellular reprogramming uses a patient’s fibroblast skin cells as donor cells. Skin biopsies, although relatively easy to do, are invasive and painful. Add to that the money and time commitment for generating the iPSCs, and the workload is too daunting to scale up.

“The prospect of generating iPSCs from hundreds of patients is daunting and would require automation of the complex reprogramming process,” said Dr. Marius Wernig, who published the first transdifferentiated neuron recipe back in 2011.

Wernig is now back with a new neuron cookbook. This time, the main ingredient is blood.

“Blood is one of the easiest biological samples to obtain,” he said.

“It’s kind of shocking how simple it is to convert T cells into functional neurons in just a few days,” Wernig said. “T cells are very specialized immune cells with a simple round shape, so the rapid transformation is somewhat mind-boggling.”

Although the transformed neurons formed synaptic connections with biological ones, they weren’t completely “normal.” Their electrical firing signals weren’t quite as mature as biological neurons, but the team hopes to further optimize their recipe to transform the cell even further.

The conversion was highly efficient, generating as many as 50,000 neurons from 1 millimeter of blood. What’s more, the process worked just as well with frozen blood. That’s incredibly good news for the study of disorders like autism or schizophrenia, which relies on large amounts of patient-specific samples to tease out genetic or other influences. In theory, they can now study hundreds of patients with schizophrenia or autism—inside a lab dish.

“For decades we’ve had very few clues about the origins of these disorders or how to treat them. Now we can start to answer so many questions,” Wernig said.

But even Wernig hesitates to dismiss stem cells altogether.

“I would say that both approaches should be actively pursued because you never know for which cases and specific applications one or the other may be more suitable,” he said.