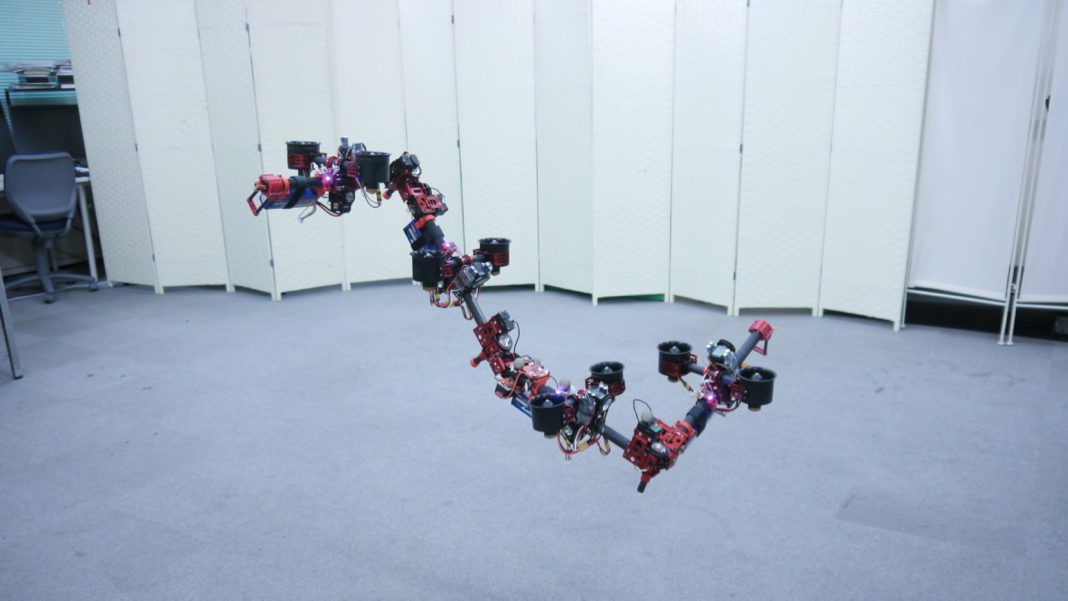 A group of roboticists at the University of Tokyo have created a flexible, flying “drone-robot” that could see a multitude of uses.

The Dual-rotor embedded multilink Robot with the Ability of multi-deGree-of-freedom aerial transformatiON, is (thankfully) better known by its acronym, DRAGON. As illustrated in the video below, it can change its shape mid-flight and fly through tight spaces.

The current version of DRAGON consists of four modules, each equipped with a set of maneuverable thrusters. Battery-powered hinged joints link the modules. A battery pack along the “spine” delivers the power. Sensing data and computing power comes from an Intel Euclid unit that includes a RealSense ZR300 depth camera and an Atom x7-8700 quad-core processor. The “drone-bot” can make autonomous decisions on how to change shape to navigate past—or through—obstacles. In its current iteration, DRAGON can stay airborne for around three minutes.

The development team, out of Tokyo University’s JSK lab, released the video below, which explains some of the math and engineering behind DRAGON.

The team is planning to increase the number of modules to 12 and add grippers at each end, which would make the drone-bot able to pick up or manipulate objects.

Moju Zhao, an assistant professor at the University of Tokyo, told Digital Trends that the research group plans to add legs to the drone-bot:

“We will [next] move forward to design a ‘multi-legged’ model with our basic link module. Then the robot can not only fly, but also walk on the ground. This can benefit us in terms of the energy efficiency. Such autonomous decision about locomotion according to the environment is very interesting research. Our ultimate dream is to achieve the flying humanoid, like an unmanned Iron Man,” he said.

Japan’s regulatory infrastructure has, to some degree, slowed the country’s uptake of drone technology. While legislative hurdles still exist, the government, in collaboration with private companies, laid down a roadmap for implementation of drone technology in 2016. In some ways, the country is eminently geographically suited for drone technology, as large areas are uninhabited. The demographic shift towards more elderly people also opens up possible uses for drones, especially in the less densely-populated areas.

“If you needed any incentive to push drone services in Japan, you need look no further than the country’s declining workforce and aging population,” Kenzo Nonami, inventor of Japan’s first-ever multicopter and a professor emeritus at Chiba University’s Graduate School of Engineering, told Japan Times.

In 2017, the country saw a test of using drones for beyond-visual-line-of-sight delivery of goods in less populated areas. Drones are also being deployed in fields (literally) such as farming, construction, and in…somehow distinctly Japanese…areas.

For example, one company plans to use drones that will patrol offices and blare music at overzealous workers to make them go home. But first place in any “They did what???” competition has to go to Asahi Power Service and its drone-powered parasols. Yes, that is the same as a flying umbrella.

DRAGON to the Rescue?

While it remains unclear what DRAGON‘s specific use cases are, it seems excellently suited for navigating through hazardous environments during rescue missions.

Rescue drones often face a trade-off between size on one hand and power/battery time on the other. DRAGON’s flexible design allows it to navigate through spaces and past obstacles that would otherwise only be possible to pass with a much smaller drone.

DRAGON could also be used for inspection tasks, and if the team’s goal of adding grippers comes to fruition, it will open up a wide array of further use cases.