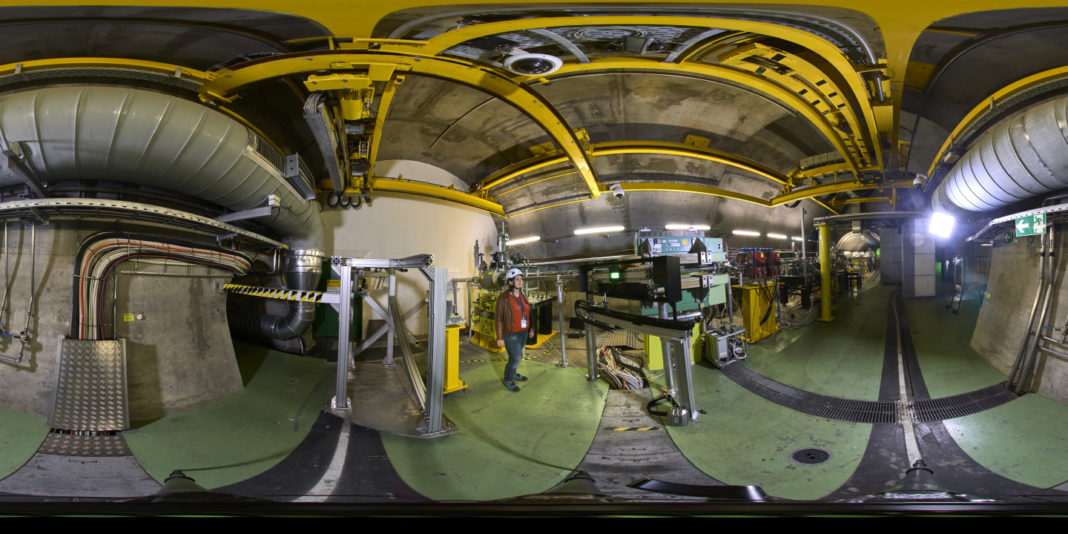 Particle accelerators have become crucial tools for understanding the fundamental nature of our universe, but they are incredibly big and expensive. That could change, though, after scientists validated a new approach that could usher in a generation of smaller, more powerful accelerators.

The discovery of the Higgs Boson in 2012 was a scientific triumph that helped validate decades of theoretical research. But finding it required us to build the 17-mile–long Large Hadron Collider (LHC) beneath Switzerland and France, which cost about $13.25 billion.

Now scientists at CERN, the organization that runs the LHC, have published results of the first successful test of a proton-driven plasma wakefield accelerator in Nature. The machine is the first successful demonstration of an idea only dreamt up in 2009, which could achieve considerably higher energies over shorter distances than older approaches.

The idea of using wakefields to accelerate particles has been around since the 1970s. By firing a high–energy beam into a plasma—the fourth state of matter that is essentially a gas whose electrons have come loose from their atoms or molecules—it’s possible to get its soup of electrons to oscillate.

This creates something akin to the wake formed as a ship passes through water, and by shooting another beam of electrons into the plasma at a specific angle, you can get the electrons to effectively ride this plasma wave, accelerating them to much higher speeds.

Previous approaches have relied on lasers or electron beams to create these wakefields, but their energy dissipates quickly, so they can only accelerate particles over short distances. That means reaching higher energies would likely require multiple stages. Protons, on the other hand, are easy to accelerate and can maintain high energies over very long distances, so a wakefield accelerator driven by them is able to accelerate particles to much higher speeds in a single stage.

In its first demonstration, the AWAKE experiment boosted electrons to 2 GeV, or 2 billion electronvolts (a measure of energy also commonly used as a unit of momentum in particle physics) over 10 meters. In theory, the same approach could achieve 1 TeV (1,000 GeV) if scaled up to 1 kilometer long (0.6 miles).

That pales in significance compared to the energies reached by the LHC, which smashes protons together to reach peak energies of 13TeV. But proton collisions are messy, because they are made up of lots of smaller fundamental particles, so analyzing the results is a time-consuming and tricky task.

That’s why most designs for future accelerators plan to use lighter particles like electrons, which will create cleaner collisions. Current theories also consider electrons to be fundamental particles (i.e., they don’t break into smaller parts), but smashing them into other particles at higher speeds may prove that wrong.

These particles lose energy far quicker than protons in circular accelerators like the LHC, so most proposals are for linear accelerators. That means that unlike the LHC, where particles can be boosted repeatedly as they circulate around the ring multiple times, all the acceleration has to be done in a single go. The proposed International Linear Collider (ILC) is expected to cost $7 billion and will require a 20– to 40–kilometer-long tunnel to reach 0.25 TeV.

That’s because, like the LHC, it will rely on radio frequency cavities, which bounce high-intensity radio waves around inside a metallic chamber to create an electric field that accelerates the particles. Reaching higher energies requires many such RF cavities and therefore long and costly tunnels. That makes the promise of reaching TeVs over just a few kilometers with proton-driven wakefield accelerators very promising.

But it’s probably a bit early to rip up the ILC’s designs quite yet. Building devices that can generate useful experimental results will require substantial improvements in the beam quality, which is currently somewhat lacking. The current approach also requires a powerful proton source—in this case, CERN’s Super Proton Synchrotron—so it’s more complicated than just building the accelerator.

Nonetheless, AWAKE deputy spokesperson Matthew Wing told Science that they could be doing practical experiments within five years, and within 20 years the technology could be used to convert the LHC into an electron-proton collider at roughly a 10th of the cost of a more conventional radio frequency cavity design.

That could make it possible to determine whether electrons truly are fundamental particles, potentially opening up entirely new frontiers in physics and rewriting our understanding of the universe.