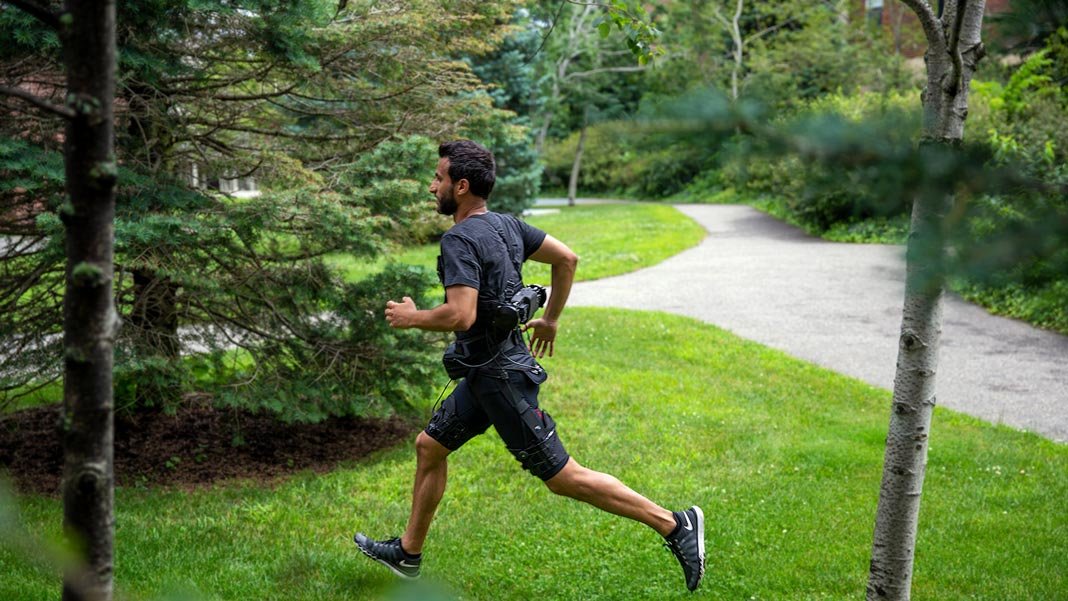 Exosuits don’t generally scream “fashionable” or “svelte.” Take the mind-controlled robotic exoskeleton that allowed a paraplegic man to kick off the World Cup back in 2014. Is it cool? Hell yeah. Is it practical? Not so much.

Yapping about wearability might seem childish when the technology already helps people with impaired mobility move around dexterously. But the lesson of the ill-fated Google Glassholes, which includes an awkward dorky head tilt and an assuming voice command, clearly shows that wearable computer assistants can’t just work technologically—they have to look natural and allow the user to behave like as usual. They have to, in a sense, disappear.

To Dr. Jose Pons at the Shirley Ryan AbilityLab in Chicago, exosuits need three main selling points to make it in the real world. One, they have to physically interact with their wearer and seamlessly deliver assistance when needed. Two, they should cognitively interact with the host to guide and control the robot at all times. Finally, they need to feel like a second skin—move with the user without adding too much extra mass or reducing mobility.

This week, a US-Korean collaboration delivered the whole shebang in a Lululemon-style skin-hugging package combined with a retro waist pack. The portable exosuit, weighing only 11 pounds, looks like a pair of spandex shorts but can support the wearer’s hip movement when needed. Unlike their predecessors, the shorts are embedded with sensors that let them know when the wearer is walking versus running by analyzing gait.

Switching between the two movement modes may not seem like much, but what naturally comes to our brains doesn’t translate directly to smart exosuits. “Walking and running have fundamentally different biomechanics, which makes developing devices that assist both gaits challenging,” the team said. Their algorithm, computed in the cloud, allows the wearer to easily switch between both, with the shorts providing appropriate hip support that makes the movement experience seamless.

To Pons, who was not involved in the research but wrote a perspective piece, the study is an exciting step towards future exosuits that will eventually disappear under the skin—that is, implanted neural interfaces to control robotic assistance or activate the user’s own muscles.

“It is realistic to think that we will witness, in the next several years…robust human-robot interfaces to command wearable robotics based on…the neural code of movement in humans,” he said.

There are a few ways you can hack a human body to move with an exosuit. One is using implanted electrodes inside the brain or muscles to decipher movement intent. With heavy practice, a neural implant can help paralyzed people walk again or dexterously move external robotic arms. But because the technique requires surgery, it’s not an immediate sell for people who experience low mobility because of aging or low muscle tone.

The other approach is to look to biophysics. Rather than decoding neural signals that control movement, here the idea is to measure gait and other physical positions in space to decipher intent. As you can probably guess, accurately deciphering user intent isn’t easy, especially when the wearable tries to accommodate multiple gaits. But the gains are many: there’s no surgery involved, and the wearable is low in energy consumption.

The authors decided to tackle an everyday situation. You’re walking to catch the train to work, realize you’re late, and immediately start sprinting.

That seemingly easy conversion hides a complex switch in biomechanics. When you walk, your legs act like an inverted pendulum that swing towards a dedicated center in a predictable way. When you run, however, the legs move more like a spring-loaded system, and the joints involved in the motion differ from a casual stroll. Engineering an assistive wearable for each is relatively simple; making one for both is exceedingly hard.

Led by Dr. Conor Walsh at Harvard University, the team started with an intuitive idea: assisted walking and running requires specialized “actuation” profiles tailored to both. When the user is moving in a way that doesn’t require assistance, the wearable needs to be out of the way so that it doesn’t restrict mobility. A quick analysis found that assisting hip extension has the largest impact, because it’s important to both gaits and doesn’t add mass to the lower legs.

Building on that insight, the team made a waist belt connected to two thigh wraps, similar to a climbing harness. Two electrical motors embedded inside the device connect the waist belt to other components through a pulley system to help the hip joints move. The whole contraption weighed about 11 lbs and didn’t obstruct natural movement.

Next, the team programmed two separate supporting profiles for walking and running. The goal was to reduce the “metabolic cost” for both movements, so that the wearer expends as little energy as needed. To switch between the two programs, they used a cloud-based classification algorithm to measure changes in energy fluctuation to figure out what mode—running or walking—the user is in.

Initial trials on treadmills were highly positive. Six male volunteers with similar age and build donned the exosuit and either ran or walked on the treadmill at varying inclines. The algorithm performed perfectly at distinguishing between the two gaits in all conditions, even at steep angles.

An outdoor test with eight volunteers also proved the algorithm nearly perfect. Even on uneven terrain, only two steps out of all test trials were misclassified. In an additional trial on mud or snow, the algorithm performed just as well.

“The system allows the wearer to use their preferred gait for each speed,” the team said.

Software excellence translated to performance. A test found that the exosuit reduced the energy for walking by over nine percent and running by four percent. It may not sound like much, but the range of improvement is meaningful in athletic performance. Putting things into perspective, the team said, the metabolic rate reduction during walking is similar to taking 16 pounds off at the waist.

The study’s lightweight exoshorts are hardly the only players in town. Back in 2017, SRI International’s spin-off, Superflex, engineered an Aura suit to support mobility in the elderly. The Aura used a different mechanism: rather than a pulley system, it incorporated a type of smart material that contracts in a manner similar to human muscles when zapped with electricity.

Embedded with a myriad of sensors for motion, accelerometers and gyroscopes, Aura’s smartness came from mini-computers that measure how fast the wearer is moving and track the user’s posture. The data were integrated and processed locally inside hexagon-shaped computing pods near the thighs and upper back. The pods also acted as the control center for sending electrical zaps to give the wearer a boost when needed.

Around the same time, a collaboration between Harvard’s Wyss Institute and ReWalk Robotics introduced a fabric-based wearable robot to assist a wearer’s legs for balance and movement. Meanwhile, a Swiss team coated normal fabric with electroactive material to weave soft, pliable artificial “muscles” that move with the skin.

Although health support is the current goal, the military is obviously interested in similar technologies to enhance soldiers’ physicality. Superflex’s Aura, for example, was originally inspired by technology born from DARPA’s Warrior Web Program, which aimed to reduce a soldier’s mechanical load.

That said, military gear has had a long history of trickling down to consumer use. Similar to the way camouflage, cargo pants, and GORE-TEX trickled down into the consumer ecosphere, it’s not hard to imagine your local Target eventually stocking intelligent exowear.