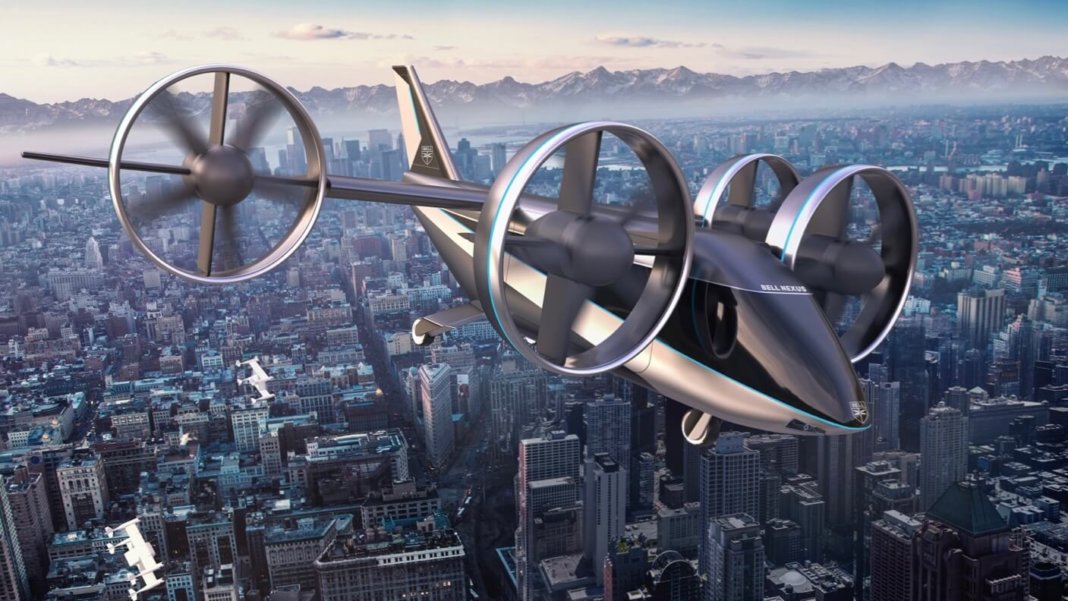 At this year’s Consumer Electronics Show, one of the world’s largest helicopter manufacturers will showcase what a city might look like with high-volume aerial transit options. Bell is showing off a connected city concept with miniature versions of its Nexus air taxi and APT cargo drone flying from building to building, as three layers of software and detect-and-avoid systems ensure their safe arrival.

Onlookers can watch the system of aircraft automatically react to inclement weather and emergency situations as well as request flights via iPads stationed around the stage.

In a few short years, the moonshot concept of flying taxis as an integral part of future cityscapes has become a sober, earnest pursuit attracting billions of dollars in investment from companies across the mobility and transportation space. A futuristic industry once thought to be gated behind decades of steady technological advancement—or written off entirely—is now concerned regulators, city planners, and the public won’t be able to keep up.

Why the Jetsons Hasn’t Happened Yet

Leonardo da Vinci drew designs for an “aerial screw” in the 1480s, but practical vertical flight didn’t emerge until the middle of the 20th century. The ability to take off and land anywhere felt future-defining. In reality, the high operating costs, annoying rotor noise, and single point of failure innate to helicopters prevented them from becoming affordable and widely-accepted transit options. Helicopter airlines rose and fell during the decades that followed, their fate sealed by rising fuel costs and a few high-profile accidents.

Today’s electric and hybrid-electric air taxi designs, made possible by continuous improvements in power storage density, electric propulsion, promise to solve the fundamental problems presented by helicopters. In addition to dramatically lower fuel costs offered by electric and hybrid vertical takeoff and landing vehicles (known as eVTOLs for short), electric motors are simpler and cheaper to maintain than turbine engines. Distributed electric propulsion—leveraging anywhere from four to dozens of separately-powered rotors—may reduce the vehicle’s total noise output and eliminate safety concerns associated with a single main rotor (though batteries have their own significant safety challenges).

Great advancements are also underway in the realm of automation, with pilots representing both one of the largest fixed expenses in helicopter operation and pilot error one of the most common causes of fatal accidents. LA-based startup Skyryse recently demonstrated a commercial helicopter modified to fly completely autonomously, a system they hope will allow newly-certified pilots to deliver a flight experience and safety record that rivals commercial airlines.

The Value Proposition of 3D Transit

There’s a reason why people with means travel via helicopter and private airplanes: It’s much faster than taking the increasingly congested streets below, though limited by available landing locations. Comparing a 300-mile car trip to an airplane flight, the skies are clearly the way to go—but for a 20-mile trip across town, as urban air mobility hopes to offer, there’s much less time to save.

But what if the proposed route contains a geographic obstacle that prevents quick travel on the ground, such as Vancouver Harbour—or traffic conditions as bad as Mumbai, São Paulo, or Los Angeles? Blade Air Mobility, which currently offers service in New York City from a helipad in Lower Manhattan to JFK airport (and many other destinations), charges $200 for a five-minute helicopter ride over the East River that takes more than an hour via taxi or public transit.

Of course, the Blade experience—or Uber Copter, which offers a similar service—doesn’t take five minutes door-to-door, especially if one’s final destination isn’t a helipad or an airport. Once ground transit to and from the helicopter and waiting for departure are included, journalists from the New York Post found Uber’s service was three minutes slower than public transportation.

The money-for-time value proposition of urban air mobility will depend on reducing the time spent traveling to and from air transit nodes and increasing passenger throughput. Commercial air transportation is often disconnected from other forms of urban transit; airports almost always lie beyond city limits—outside the reach of complicated zoning and airspace restrictions.

Urban air mobility will have to be properly integrated into existing and future metro, bus, and other transit options for the full-trip time savings of taking to the air to be realized. Many cities also do not currently have enough helipads to build a useful network of destinations, a challenge which infrastructure investment and real estate development firms are beginning to tackle.

In addition to creating time savings, the consumer cost of 3D urban transit must come down if it is to become a market worthy of the trillion-dollar expected valuations it’s been given by analysts.

Blade, Uber, and Voom—a subsidiary of aerospace giant Airbus—have reduced the cost of on-demand helicopter transit substantially, from thousands per trip to roughly $200 through tech, data, and ridesharing. Electric vehicles, and eventually autonomy, promise to bring this cost down further, but will that be enough to present a cost-viable alternative to cars and public transit?

It’s also a moving cost target that urban air mobility is trying to hit, as auto manufacturers and tech companies invest billions into autonomous driving capabilities, electric vehicles, and advanced manufacturing capabilities—all of which threaten to reduce the cost and friction of car-based transportation, which has the tremendous physics advantage of not having to overcome gravity. Uber revolutionized the on-demand car experience in ways unimaginable 10 years ago. What will air taxis be up against by the time they’re certified and ready for prime time?

The Insanity of Scaling Aerospace

It’s hard to understate how revolutionary the targeted scale of urban air mobility is for the aerospace industry writ large.

On average, in the US, there are nearly three million people flying through the sky every day, sipping on ginger ale and apple juice, facing an incredible rate of just 0.2 deaths per ten billion passenger miles for commercial air travel—750 times safer than driving. While an astounding accomplishment of steady industry progress, the 5,000 airplanes flying across US airspace simultaneously at peak operational times hardly compare to the 1.4 billion estimated cars on the road worldwide. Meeting that bar with tens of thousands of low-altitude vehicles crisscrossing the sky will require precise and instantaneous air traffic control systems without a human in the loop—a 180-degree departure from the human-centric system in place today.

For urban air mobility to succeed, the aerospace industry will have to safely manufacture, operate, and maintain aircraft at a scale never before imagined while meeting the public’s astoundingly high expectations for air safety. It’s unsurprising that many leading eVTOL aircraft developers have taken strategic investment from leading auto manufacturers including Daimler, Hyundai, and Toyota—companies which have experience manufacturing by the million, rather than the hundred, and are angling to stay relevant in a world that has likely reached peak internal combustion engine.

There are many, many reasons to doubt the urban air mobility industry will take off or reach the scale and unit economics its greatest advocates promise. Even if the aircraft, airspace, and regulatory challenges are solved, urban air mobility may have little to offer over existing transportation without proper integration, and city planners are already making critical decisions for 2030.

The World Economic Forum recently partnered on an industry study with the city of Los Angeles—one of three cities Uber aims to launch commercial air taxi service in by 2023 through its Elevate ecosystem—but educating and convincing cities, with constituents who may be skeptical of spending taxpayer infrastructure dollars on flying cars, will be an uphill challenge. A single high-profile accident could set urban air mobility back years, especially as the public struggles to process the industry-wide safety failure that was the Boeing 737 MAX.

Right now, over two hundred electric and hybrid aircraft projects are under development, though most industry observers guesstimate that somewhere between two and five will succeed in producing an FAA-certified aircraft capable of carrying multiple passengers. The urban air mobility world is likely experiencing an investment bubble, still full of insane promises, newcomers to aerospace—“the best way to make a million bucks in aerospace is to start with a billion”—and outright grifters.

What’s next for those building the flying car future?

A wave of bankruptcy, consolidation, and lowered expectations may be imminent. But after that course correction, cities around the world might see electric on-demand air taxis in their skyline, sooner than one may think—and if we’re lucky, they might actually be affordable.

Brian Garrett-Glaser is assistant editor for Avionics International. He is the author of The Skyport, a free bi-weekly newsletter covering the rise of drones and air taxis.