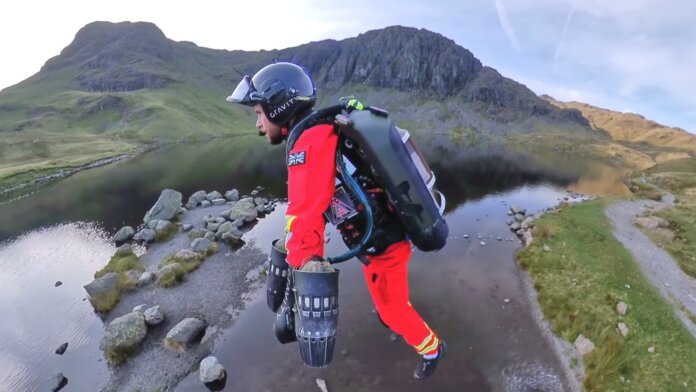 A few years ago, I saw a guy in a jet suit take off in San Francisco’s Golden Gate Park. The roar was deafening, the smell of fuel overwhelming. Over the span of a few minutes, he hovered above the ground and moved about a bit. The jet suit’s inventor, Richard Browning, had left a career in the energy industry and a stint in the Royal Marines, to go after a childhood dream.

But the jet suit seemed a bespoke, one-off kind of thing. It didn’t appear poised to revolutionize office commutes (remember those?) or even to divert oneself on the weekends. Not yet. Since then, however, Browning’s dialed in his invention, and in addition to a barnstorming tour, his company, Gravity Industries, has begun exploring ways his jet suit could help people.

Which explains why, not too long ago, you’d have found Browning gliding up a mountainside to the aid of an “injured” hiker in England’s Lake District. It was a trial, in partnership with the Great North Air Ambulance Service (GNAAS), to see if a personal jet suit might be a new tool for emergency responders in wilderness areas.

The idea isn’t to replace emergency personnel on foot or helicopters to airlift serious cases. Rather, the main motivation is getting a first responder on site as fast as possible. Whereas it would have taken emergency responders 25 minutes to get to the hikers on foot, Browning and his jet suit were on location in a mere 90 seconds. A clear advantage.

The Lake District has dozens of patients in need of support every month, according to GNAAS director of operations and paramedic Andy Mawson. The first paramedic to reach a patient can assess the situation, communicate what’s needed to the team, and stabilize the patient.

“We think this technology could enable our team to reach some patients much quicker than ever before. In many cases, this would ease the patient’s suffering. In some cases, it would save lives,” Mawson said in a press release.

The test certainly demonstrated the jet suit’s speed. That said, it may not be useful in every situation. For example, the suit is limited to locations within 5 to 10 minutes flight time (one way). This is one reason the GNAAS chose the Lake District, which has a high volume of calls in a fairly compact geographic footprint. Also, Browning says he typically operates the jet suit near the ground for safety reasons. Extra steep or cliffy terrain might prove an impediment (though you could still fly to the base of any such features).

And what about training, you may ask?

Browning makes it look easy, but he invented the thing and has logged many hours flying it. According to a Red Bull interview from last year, it was no walk in the park to fly early on, requiring great balance and strength.

But Browning has since refined the suit, including the addition of a rear jet for stability, goggles with a head-up display, and computer-automated thrust to compensate for the suit losing weight as it burns through fuel. These days, according to Browning, it’s a much more intuitive experience.

“It’s a bit like riding a bicycle or skiing or one of those things where it’s just about you thinking about where you want to go and your body intuitively going there,” Browning told Digital Trends in a recent profile. “You’re not steering some joystick or a steering wheel. We’ve had people learn to do this in four or five goes—with each go just lasting around 90 seconds. All credit to the human subconscious—it’s just this floating, dreamlike state.”

The biggest near-term barrier may actually be cost. According to the Red Bull article, at least one suit has sold for over $400,000. Depending on the customer and use case, then, that price tag might be a bit steep. But it needn’t stay that high forever. With enough demand, one could imagine a standardized manufacturing process bringing the cost down.

Still, the test certainly impressed all participants, and GNAAS and Gravity Industries plan to continue exploring next steps. “We could see the need. What we didn’t know for sure is how this would work in practice,” Mawson said. “Well, we’ve seen it now, and it is, quite honestly, awesome.”

Yep. It’s a guy in a jet suit after all, which is pretty freaking cool. And if their work brings about a new cadre of jet-suit-equipped wilderness paramedics—all the cooler.