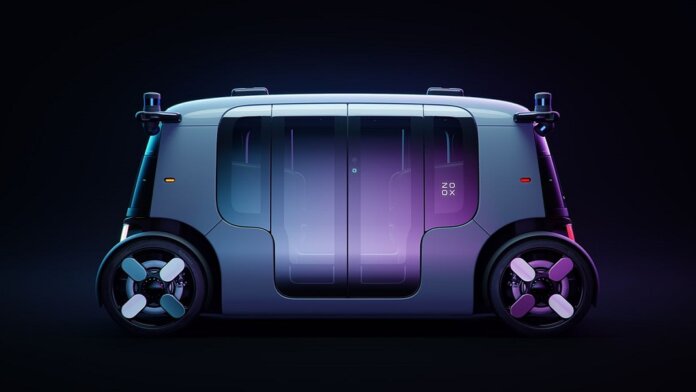 After almost a year of limiting our contact with the people in our lives and humanity in general, it’s hard to imagine a future where we freely move about our cities and towns going to meetings, errands, and social events. And it may be even harder to envision doing so in driverless taxis that look sort of like giant toasters on wheels. But go ahead and fire up your imagination—and your hope for a near future filled with socialization instead of social distancing—because Amazon is doing just that.

In June the company bought self-driving car startup Zoox in a deal that was estimated to be worth over $1 billion (though the startup was valued at $3.2 billion two years earlier in 2018). And last week, Zoox unveiled its first prototype of a four-seater taxi with no driver—nor steering wheel, brakes, or accelerator.

Here’s what the car does have, though. Two bench-style seats face each other, flanked by tall transparent doors that slide open to deposit riders at their destinations. Each seat has a touchscreen next to it where passengers can adjust the climate and monitor their route and arrival time.

A 133-kilowatt-hour battery powers the car, and its makers say that one full charge gives the vehicle enough power to drive for 16 hours; there aren’t details about how this would vary based on how fast the car is going, how many stops it makes, and how many passengers are inside, but we can assume the 16 hours would take place under average city driving conditions—a lot of stops and turns, and average speeds around 30-45 miles per hour.

133 kWh is a lot for a car battery. Tesla’s Model 3s have used 50-75 kWh lithium-ion batteries, and the 2021 version will reportedly use an 82 kWh battery pack. Batteries are a tradeoff between range and speed; the bigger the battery, the farther you can go before needing another charge, but it weighs your car down, too. Unsurprisingly, then, the Zoox robotaxi is heavy—really heavy, weighing in at 5,400 pounds. That’s about 1,000 pounds over the weight of a mid-size truck or SUV.

For now, though, Zoox vehicles won’t be looking to go super fast. Their max speed is 75 miles per hour, but their initial use will be limited to city driving, avoiding highways altogether. The company plans to work on hybrid city-highway vehicles in later iterations.

Riding around in a robotic taxi may take some time to become commonplace, and many potential passengers will likely wonder about safety. The vehicles are outfitted with all kinds of tech to avoid collisions and other accidents; the top of the taxis have six LIDARs distributed over the surface, along with multiple cameras and radars on the outer body. The sensor fields overlap so that the car’s “eyes” don’t have any blind spots, and Zoox says they can see objects that are almost 500 feet away. The inside of the cars also have airbags that, according the Zoox’s website, “cushion your head, neck, and chest in a totally new way.”

Amazon’s stock in the past year has taken off in a way only comparable to other services that have become essential during the pandemic, like Zoom and Instacart. But it’s a little surprising that the tech behemoth is funneling so much money into a driverless passenger transportation service; you’d think Amazon would rather focus on automated package delivery, say, using driverless vehicles to get packages to the right block, then robots to transport items from delivery vehicles to customers’ front doors.

On the plus side, though, it’s reassuring to know Big Tech is investing money in a future where people once again go places—and they don’t seem to think that future is too far away.