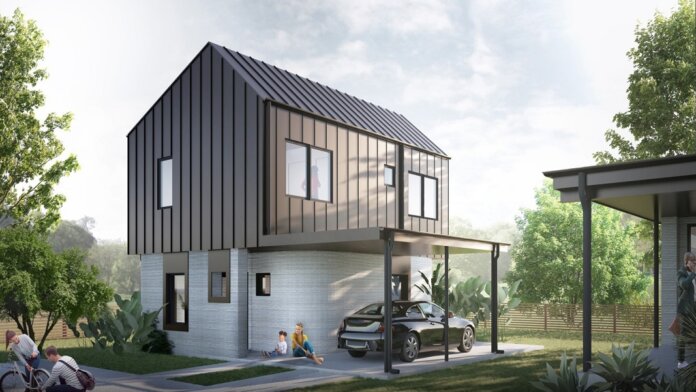 In late January of this year, one of the first 3D printed homes in the US went up for sale on Long Island. Now it’s being joined by four additional homes located in Austin, Texas.

The Austin homes are a collaboration between 3D printing construction company ICON and a Kansas City-based developer called 3Strands. 3Strands isn’t just any housing developer—they focus on cutting construction costs and designing neighborhoods in a way that encourages community-building.

Though the tag line of their “Neighborhoods” division may throw you for a loop (“a real estate integrator that builds neighborhoods at the intersection of housing and loneliness”), their mission is certainly noble; CEO and co-founder Gary O’Dell explains that the company’s name came from three persistent challenges he observed as a property owner: people struggled to afford to live where they wanted, were rarely able to realize the financial benefits of home ownership, and felt lonely. Part of the solution, O’Dell believes, is not only making homes more affordable, but designing neighborhoods with shared spaces that facilitate socialization.

3Strands is building four homes in East Austin using ICON’s Vulcan 3D printer for the first floor (the upper floor will be built onto the 3D printed base using good old 2x4s and drywall). The Vulcan is becoming a seasoned tool for homebuilding, having debuted with a demo home in Austin at SXSW in 2018 and subsequently having its successor, the Vulcan II, put to work on a community of 50 homes in southern Mexico. The 11.5 foot-tall by 33-foot-wide printer consists of an axis set on a track, and puts down stacked layers of a concrete mixture in a pattern that’s coded into its software.

The houses are 1,000 to 2,000 square feet, and there are different models with between 2 to 4 bedrooms. The pricing will be around $450,000, which is on par with comparable homes in the area. The printing portion of the building process takes five to seven days per home.

With Austin being one of the hottest real estate markets in the country right now, it will be interesting to see if ICON’s homes sell faster than the New York house—it’s been on Zillow for about a month and a half, which is a bit surprising given its comparatively low price for the area.

The novelty of 3D printed homes could be seen as a pro or a con, depending on your point of view—but as the steadily-climbing popularity of the technology for construction shows, it’s only a matter of time until homes churned out by a printer rather than pieced together by human labor are commonplace.