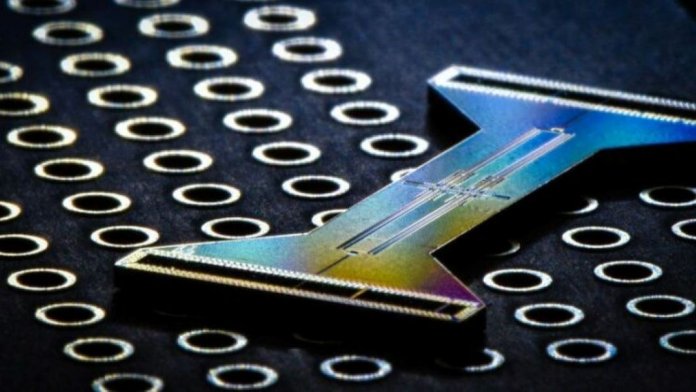 Engineering giant Honeywell burst into the quantum computing race out of left field last year. Now the company has provided the first concrete details of how its device works in a peer-reviewed journal.

Unlike its main rivals Google and IBM, who rely on superconducting qubits, Honeywell is using trapped ions to power its device. The technology has a long pedigree—most of the earliest quantum computing experiments relied on this approach—but difficulties in scaling devices beyond a few qubits saw it eclipsed by alternatives.

The technique relies on encoding information in the quantum states of charged particles called ions, which are suspended in a vacuum using electromagnetic fields. These qubits have a number of advantages over their superconducting cousins: they maintain their quantum states far longer, they’re less error-prone, and they can easily interact with many qubits rather than only their closest neighbors.

But there are only so many ions one can confine to a single trap, which puts an upper limit on how big conventional devices could be. And while they can interact with many qubits, they do so considerably slower than superconducting devices.

Last March, Honeywell burst onto the quantum computing scene by claiming to have solved these problems and created the most powerful quantum computer to date. Now they’ve finally lifted the lid on exactly how they did that in a paper published in Nature.

The company’s machine builds on a design first proposed in 2002, which solves many of the limitations of the technology by shuttling ions around. The device reported in Nature features up to six qubits made of ytterbium-171 atoms arranged in a line.

However, unlike in more conventional trapped-ion computers, they aren’t held in place using a single static electric field. The device’s 198 electrodes can be controlled independently to dynamically vary the field, which allows the qubits to be shifted up and down to interact with each other.

This makes it possible for all the qubits to interact, which has major implications for the complexity of the algorithms the machine can implement. The importance of this kind of connectivity was actually first brought to the fore by Honeywell’s rival, IBM, when it introduced a measure called quantum volume to help track progress in the field.

Simply adding qubits to your device is only helpful if they are not too error-prone and can actually do useful work. So IBM researchers suggested that the true test of a quantum computer is the size of the most complicated circuit a device can implement to a certain standard of reliability.

The resulting metric is called quantum volume, and last year IBM achieved a volume of 64 on its 27-qubit processor. But Honeywell shows in the paper that it can match that figure using just six qubits thanks to the device’s much greater connectivity, and also its low error rates.

Since the research was carried out, the company has brought the number of qubits in its device up to 10, which it says can now achieve a quantum volume of 512, though the results have yet to be peer-reviewed. The company also outlined how it plans to scale its set up to far larger numbers of qubits.

Its current linear system has capacity for up to 40 qubits, but the company is already testing a successor device that looks more like a race track and could hold considerably more. The next stage will be to create a processor featuring a grid of traps and then integrating many of these grids together.

But as John Timmer points out in Ars Technica, Honeywell isn’t the only company making big strides with trapped-ion computers. Startup IonQ has built a processor that uses arrays of laser beams to connect ions together rather than shuttling them around. Its earlier 11-qubit prototype achieved a quantum volume of 32.

Now the company says it has boosted the number of qubits to 32 while simultaneously reducing the error in the system. While its results have yet to be independently verified, IonQ claims this could give it a quantum volume as high as four million.

Which approach will ultimately prove most effective in the end remains to be seen, and there’s still a long way before any of these devices are able to outcompete the most powerful classical computers. But what’s certain is that trapped-ion technology is now a serious competitor in the quantum race.