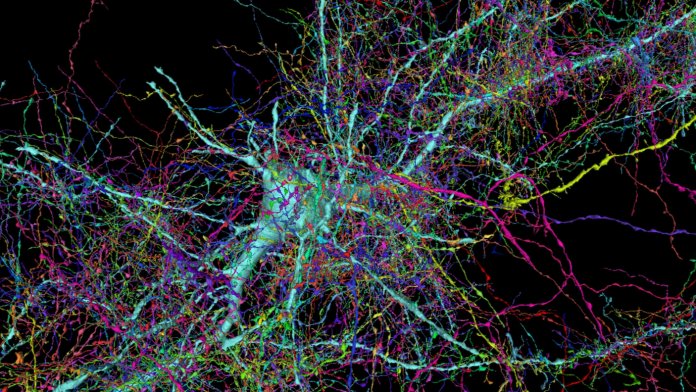 Last Tuesday, teams from Google and Harvard published an intricate map of every cell and connection in a cubic millimeter of the human brain.

The mapped region encompasses the various layers and cell types of the cerebral cortex, a region of brain tissue associated with higher-level cognition, such as thinking, planning, and language. According to Google, it’s the largest brain map at this level of detail to date, and it’s freely available to scientists (and the rest of us) online. (Really. Go here. Take a stroll.)

“The human brain is an immensely complex network of brain cells which is responsible for all human behavior, but until now, we haven’t been able to completely map these connections within even a small region of the brain,” said Dr. Alexander Shapson-Coe, a postdoctoral fellow at Harvard’s Lichtman Lab and lead author of a preprint paper about the work.

To make the map, the teams sliced donated tissue into 5,300 sections, each 30 nanometers thick, and imaged them with a scanning electron microscope at a resolution of 4 nanometers. The resulting 225 million images were computationally aligned and stitched into a 3D digital representation of the region. Machine learning algorithms segmented cells and classified synapses, axons, dendrites, cells, and other structures, and humans checked their work.

Last year, Google and the Janelia Research Campus of the Howard Hughes Medical Institute made headlines when they similarly mapped a portion of a fruit fly brain. That map, at the time the largest yet, covered some 25,000 neurons and 20 million synapses. In addition to targeting the human brain, itself of note, the new map includes tens of thousands of neurons and 130 million synapses. It takes up 1.4 petabytes of disk space.

By comparison, over three decades’ worth of satellite images of Earth by NASA’s Landsat program require 1.3 petabytes of storage. Collections of brain images on the smallest scales are like “a world in a grain of sand,” the Allen Institute’s Clay Reid told Nature, quoting William Blake in reference to an earlier map of the mouse brain.

All that, however, is but a millionth of the human brain. Which is to say, a similarly detailed map of the entire thing is yet years away. Still, the work shows how fast the field is moving. A map of this scale and detail would have been unimaginable a few decades ago.

How to Map a Brain

The study of the brain’s cellular circuitry is known as connectomics.

The only complete connectomes are for simple creatures: the nematode worm (C. elegans) and the larva of a sea creature called C. intestinalis. There’s a very good reason for that. Until recently, the mapping process was time-consuming and costly.

Researchers mapping C. elegans in the 1980s used a film camera attached to an electron microscope to image slices of the worm, then reconstructed the neurons and synaptic connections by hand, like a maddeningly difficult three-dimensional puzzle. C. elegans has only 302 neurons and roughly 7,000 synapses, but the rough draft of its connectome took 15 years, and a final draft took another 20. Clearly, this approach wouldn’t scale.

These days the images themselves are, of course, digital. A process known as focused ion beam milling shaves down each slice of tissue a few nanometers at a time. After one layer is vaporized, an electron microscope images the newly exposed layer. The imaged layer is then shaved away by the ion beam and the next one imaged, until all that’s left of the slice of tissue is a nanometer-resolution digital copy. It’s a far cry from the days of Kodachrome.

But maybe the most dramatic improvement is what happens after scientists complete that pile of images.

Instead of assembling them by hand, algorithms take over. Their first job is ordering the imaged slices. Then they do something impossible until the last decade. They line up the images just so, tracing the path of cells and synapses between them and thus building a 3D model. Humans still proofread the results, but they don’t do the hardest bit anymore. (Even the proofreading can be refined. Renowned neuroscientist and connectomics proponent Sebastian Seung, for example, created a game called Eyewire, where thousands of volunteers review structures.)

“It’s truly beautiful to look at,” Harvard’s Jeff Lichtman, whose lab collaborated with Google on the new map, told Nature in 2019. The programs can trace out neurons faster than the team can churn out image data, he said. “We’re not able to keep up with them. That’s a great place to be.”

In a 2010 TED talk, Seung told the audience you are your connectome. Reconstruct the connections and you reconstruct the mind itself: memories, experience, and personality.

But connectomics has not been without controversy over the years.

Not everyone believes mapping the connectome at this level of detail is necessary for a deep understanding of the brain. And, especially in the field’s earlier, more artisanal past, researchers worried the scale of resources required simply wouldn’t yield comparably valuable (or timely) results.

“I don’t need to know the precise details of the wiring of each cell and each synapse in each of those brains,” nueroscientist Anthony Movshon said in 2019. “What I need to know, instead, is the organizational principles that wire them together.” These, Movshon believes, can likely be inferred from observations at lower resolutions.

Also, a static snapshot of the brain’s physical connections doesn’t necessarily explain how those connections are used in practice.

“A connectome is necessary, but not sufficient,” some scientists have said over the years. Indeed, it may be in the combination of brain maps—including functional, higher-level maps that track signals flowing through neural networks in response to stimuli—that the brain’s inner workings will be illuminated in the sharpest detail.

Still, the C. elegans connectome has proven to be a foundational building block for neuroscience over the years. And the growing speed of mapping is beginning to suggest goals that once seemed impractical may actually be within reach in the coming decades.

Are We There Yet?

Seung has said that when he first started out he estimated it’d take a million years for a person to manually trace all the connections in a cubic millimeter of human cortex. The whole brain, he further inferred, would take on the order of a trillion years.

That’s why automation and algorithms have been so crucial to the field.

Janelia’s Gerry Rubin told Stat he and his team have overseen a 1,000-fold increase in mapping speed since they began work on the fruit fly connectome in 2008. The full connectome—the first part of which was completed last year—may arrive in 2022.

Other groups are working on other animals, like octopuses, saying comparing how different forms of intelligence are wired up may prove particularly rich ground for discovery.

The full connectome of a mouse, a project already underway, may follow the fruit fly by the end of the decade. Rubin estimates going from mouse to human would need another million-fold jump in mapping speed. But he points to the trillion-fold increase in DNA sequencing speed since 1973 to show such dramatic technical improvements aren’t unprecedented.

The genome may be an apt comparison in another way too. Even after sequencing the first human genome, it’s taken many years to scale genomics to the point we can more fully realize its potential. Perhaps the same will be true of connectomics.

Even as the technology opens new doors, it may take time to understand and make use of all it has to offer.

“I believe people were impatient about what [connectomes] would provide,” Joshua Vogelstein, cofounder of the Open Connectome Project, told The Verge last year. “The amount of time between a good technology being seeded, and doing actual science using that technology is often approximately 15 years. Now it’s 15 years later and we can start doing science.”

Proponents hope brain maps will yield new insights into how the brain works—from thinking to emotion and memory—and how to better diagnose and treat brain disorders.

“This advance opens up the possibility of comparing networks of healthy and diseased brains, to identify the network changes that are thought to cause mental illnesses and other neurological disorders,” Shapson-Coe said.

Others, Google among them no doubt, hope to glean insights that could lead to more efficient computing (the brain is astonishing in this respect) and more powerful artificial intelligence.

There’s no telling exactly what scientists will find as, neuron by synapse, they map the inner workings of our minds—but it seems all but certain great discoveries await.

Update (6/9/2021): Added quotes about the significance of the work from Alexander Shapson-Coe, a postdoctoral fellow at Harvard’s Lichtman Institute and lead author of a paper describing the study.