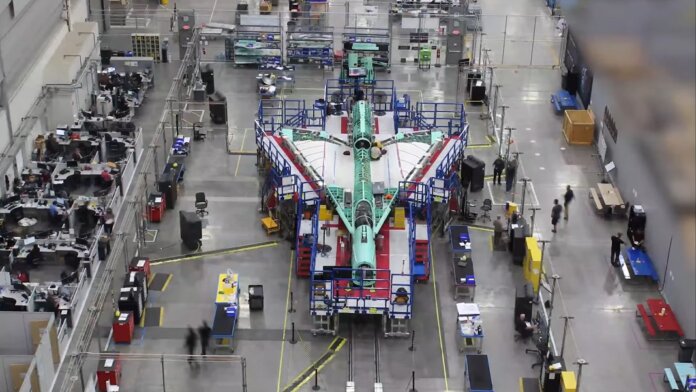 The final flight of British Airways’ Concorde took place in October 2003, going from New York to London in three and a half hours. Inaugurated in 1976, the supersonic jet flew more than 2.5 million passengers over its lifetime, at an average cruising speed of 1,350 miles per hour.

The Concorde was retired mostly because it wasn’t financially viable (the price of a ticket between Paris and New York was around $10,000, but even this wasn’t enough to make up for the cost of operating and maintaining the jets). A deadly crash in July 2000 didn’t help, nor did the aircraft’s noise pollution and fuel economy issues.

But despite the Concorde’s imperfections, neither NASA nor private industry gave up on supersonic flight. This week, NASA released a timelapse video showing construction of its new supersonic jet, the X-59 Quiet SuperSonic Technology (thankfully, it goes by QueSST or “son of Concorde” for short). The video shows work being done on the aircraft at Lockheed Martin’s Skunk Works factory in Palmdale, California between May 2019 and June 2021.

“We’ve now transitioned from being a bunch of separate parts sitting around on different parts of the production floor to an airplane,” said Jay Brandon, NASA chief engineer for the Low Boom Flight Demonstrator (LBFD) project. The video shows the fuselage (where the cockpit sits), wings, and tail coming together. Once complete, the aircraft will be 94 feet long and have a wingspan of 29.5 feet.

The biggest component left to attach is the 30-foot-long nose, which is key for controlling the way air moves around and away from the body. The aircraft was very much designed with sound in mind; its tagline claims it will “reduce loud sonic booms to a quiet thump.”

Simply put, when an aircraft flies faster than the speed of sound (which is about 761 miles per hour at sea level), pressure waves created by displaced air molecules combine to generate shockwaves, which people on the ground hear as a sonic boom.

Among other features to decrease noise pollution, the X-59 has a single high-thrust engine that’s placed on top of its body, directing its sound away from the ground.

Initial flight tests of the aircraft are scheduled to start in 2022, with Lockheed Martin planning to run flight tests for nine months. If all goes well, the company will deliver the aircraft to NASA in 2023, and the space agency will begin its own flight tests. The technology could ultimately be used for commercial flights or military applications.

It will have to clear some significant hurdles before that happens, though. Supersonic flight over land has been prohibited since 1973, when the Federal Aviation Administration banned it due to the impact of sonic booms. In January of this year, the FAA proposed a set of rules for supersonic flight testing, an encouraging sign that the technology may make a comeback.

Environmental considerations are at the forefront of the FAA’s guidelines; given the amount of fuel they burn (by one estimate, around eight times as much as a 777 for a trans-Atlantic trip), supersonic jets are far worse than regular planes in terms of emissions. “One of the big problems with the Concorde was it was considered very bad for the environment,” University of Dayton professor Janet Bednarek, who studies aviation history, told Recode. “It burned a lot of fuel, but it also polluted at the upper levels of the atmosphere.”

Nevertheless, NASA and Lockheed Martin aren’t the only ones forging ahead with supersonic flight technology. United Airlines announced in June that it’s buying 15 supersonic planes from Denver-based Boom, at a cost of $200 million apiece. United and Boom claim the flights will use sustainable fuel and be net-zero carbon, but scaling up production of these fuels to the level needed for supersonic flight—and even for regular commercial flights—won’t be easy.

Finally, there’s the question of how big of a market there will be for these flights. This is mostly post-pandemic mode talking, but trans-oceanic travel, at least for business, doesn’t seem as necessary as it used to. That could very likely change in the next several years, especially as memories of pandemic times are slowly wiped from our traumatized minds and our eagerness for exploring the world returns.

Will we have the chance to fly across the Atlantic in under four hours? If the X-59 and other supersonic flight technology pan out, it’s definitely a possibility.