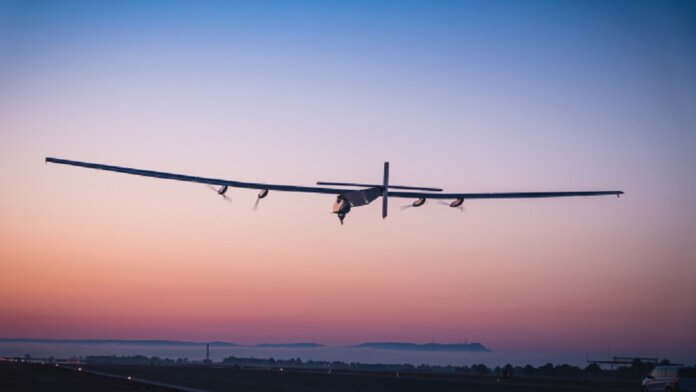 Five years ago, a plane called Solar Impulse 2 flew around the world without using any liquid fuel. As you might guess from the name, the plane was solar-powered. It wasn’t the fastest—it took almost a year and a half to circumnavigate the globe, traveling 26,718 miles and stopping in 17 different cities. But it was a meaningful proof of concept, and a technological feat.

Now Solar Impulse 2 has a successor, with equally ambitious plans on the horizon. Skydweller, as the new plane has been appropriately dubbed, relies on the same basic technology as Solar Impulse 2, but will be autonomous and able to fly continuously for up to 90 days. And by autonomous, I mean there won’t even be an option to have a pilot sit in the cockpit and direct the plane, because there is no cockpit.

That frees up extra space that can be used for other purposes, though. Skydweller will be able to carry payloads of up to 800 pounds—and they’ll most likely consist of radar and camera equipment, as the US Navy is funding a demo of the aircraft as a surveillance tool for monitoring the whereabouts of ships.

Talk about an (unrelenting) eye in the sky. But the fact that it will stay aloft for months on end is, of course, Skydweller’s main advantage.

The solar aircraft is made by a Spanish-American aerospace startup called Skydweller Aero. Based in Oklahoma City, the company raised $32 million in its Series A funding round, led by Italian aerospace firm Leonardo.

“For us, if you’re flying 90 days with one aircraft, that’s two takeoffs and landings versus … hundreds,” Skydweller Aero co-founder John Parkes told Aviation Today. “Being able to fly thousands of miles, persist over an area for 30-60 days and fly back is a differentiator. It’s a huge cost savings to the US government when you look at the whole cost of doing a lot of the national security missions that we have.”

The plane will stay airborne thanks to 2,900 square feet of photovoltaic cells that will blanket its surface, generating up to 2 kilowatts of electricity. As a backup in case it’s cloudy for a few days in a row, the plane will also be equipped with hydrogen fuel cells (maybe they’re not as “extremely silly” as Elon Musk thinks).

“There are certainly differentiated missions that Skydweller can do that no other aircraft can do, but the core of it really is doing things that we do today better, smarter, cheaper, more effectively,” Parkes said. “And that is communications—being a node in the sky, whether for the military and first responder market or for the telecom world.”

The company plans to start testing its aircraft in autonomous takeoff, landing, and flight this year. Once those tests are complete, they’ll be followed by long-endurance testing, with the goal of hitting at least 90 continuous days of flight.