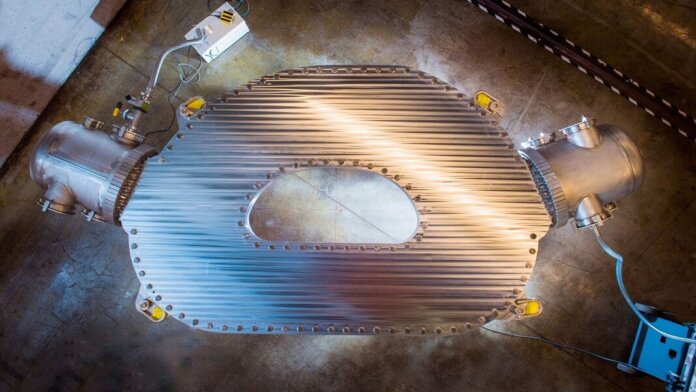 Fusion power could be a silver bullet for the world’s energy and environmental woes, but it’s famously always 30 years away. A recent flurry of announcements is raising hopes that maybe the timeline has started to tighten.

The technology has huge potential because it promises to generate enormous amounts of energy from abundant fuel that can be cheaply extracted from seawater. On top of that, the process doesn’t create any long-lived radioactive waste, unlike conventional nuclear power plants.

The catch is that finding a way to contain the same reaction that powers the sun here on Earth is no easy feat. Now, though, MIT spinout Commonwealth Fusion Systems (CFS) has taken a significant step in that direction after carrying out the first tests of a magnet that can reach a field strength of 20 teslas, the highest ever achieved on Earth.

Magnets are the most popular approach to controlling fusion reactors because the roiling ball of super-heated plasma at their heart is made up of charged particles that can be corralled using magnetic fields.

Most fusion reactors use a design called a tokamak, which confines the plasma in a donut-shaped vessel with a large magnet in the middle and many magnetic coils looping around the container. Not just any magnet will do, though; most designs rely on superconducting magnets that need to be chilled to just above absolute zero.

Commonwealth’s innovation has been to use a new kind of high-temperature superconductor that doesn’t need to be chilled quite as far. This allows them to achieve a far higher magnetic field in a much smaller package. To achieve the same power using low-temperature superconducting magnets would require an apparatus 40 times larger, the company says.

The breakthrough is a major milestone towards the development of their first test reactor, SPARC, which they say will come online by 2025. This won’t produce enough power to be commercially viable, but it’s putting Commonwealth on course to overtake the most established nuclear fusion project to date: the International Thermonuclear Experimental Reactor (ITER).

ITER is a multinational collaboration and is aiming to demonstrate a fusion reactor capable of producing more energy than it uses by 2035. It has made significant progress recently, with the delivery of the first part of its main magnet to the project site in Southern France.

The magnet is built using low-temperature superconductors. It is only expected to achieve 13 teslas, but it will measure 60 feet by 14 feet when fully constructed and is powerful enough to lift an aircraft carrier. Scientists behind the project say the reactor could come online by early 2026, setting up a photo finish with Commonwealth to be the first to launch a working fusion reactor.

These are far from the only fusion power projects in the works, however. A host of startups dedicated to fusion have cropped up in recent years, and investors have piled more than $300 million into the industry in 2020 alone, according to Bloomberg.

One of the leaders of the pack, General Fusion, recently announced a deal with the UK government to build its first pilot power plant just outside Oxford at the campus of the country’s Atomic Energy Authority. It will only be 70 percent of the size required for a commercially viable facility, but the company is also targeting a 2025 launch.

General Fusion is one of the few fusion projects to abandon the tokamak design, instead relying on an approach called magnetized target fusion. This involves a device called an injector essentially blowing smoke rings of plasma that are then compressed to temperatures and pressures that initiate a fusion reaction.

An even more exotic approach also had a recent breakthrough. Scientists at the National Ignition Facility at Lawrence Livermore National Laboratory used 192 gigantic lasers to initiate a fusion reaction in a pellet of hydrogen that generated more than 1.3 megajoules of energy. The reaction only lasted for 100 trillionths of a second, but the early data suggest it was self-sustaining.

The setup used was actually designed as a tool to monitor nuclear weapons, though, so re-imagining it to work as a power plant would likely require decades of research. It’s also important to remember that even the more established projects are only pilot plants that are still a long way from producing useful amounts of power.

Right now the big goal is “breakeven” power generation, where the amount of power collected from the fusion reaction is greater than that used to power the reactor. But writing in The Observer, Arthur Turrell notes that a commercially viable fusion plant would probably need to generate 30 times as much energy.

Given the enormous cost and complexity of even the earliest test facilities, it’s likely it’ll still be a long time before nuclear fusion plants make up a significant chunk of the grid. But the industry is undoubtedly showing some growing momentum, and we may well see the first fusion reactors start springing up later this decade.