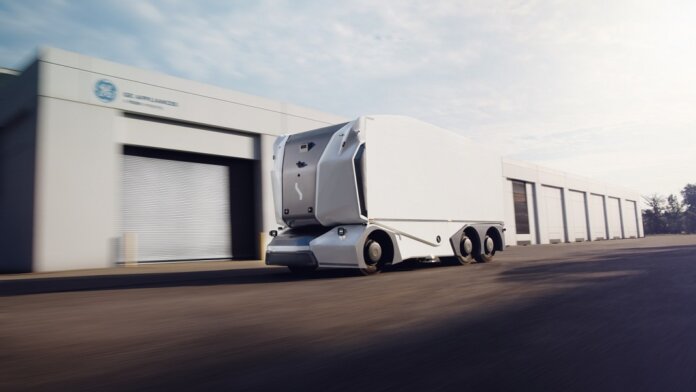 Self-driving cars are taking longer to become a reality than many experts predicted. But that doesn’t mean there isn’t steady progress being made; on the contrary, autonomous driving technology is consistently making incremental advancements in all sorts of vehicles, from cars to trucks to buses. Last week, General Electric (GE) and Swedish freight tech company Einride announced a partnership to launch a fleet of autonomous electric trucks.

According to the press release, the fleet will be the first of its kind to operate in the US, with trucks running on GE’s 750-acre Appliance Park campus in Louisville, Kentucky, as well as at GE facilities in Tennessee and Georgia.

Einride was founded in 2016, raised $25 million in Series A funding in 2019, and most recently raised $110 million this past May. Though the company makes electric trucks that are driven by humans, it’s primarily known for another vehicle that can’t quite be called a truck; the company’s Pods not only lack drivers, they lack cabs for drivers to sit in. The vehicles are similar to Volvo’s Vera trucks, which also lack cabs, though the Pods are meant for medium distance and capacity, like moving goods from a distribution center to a series of local stores.

The Pods will need regulatory approval to operate on public roads, so for now they’ll be limited to driving around within customers’ campuses (a safety driver isn’t required if the vehicles are on private property). According to Reuters, Einride just hired its first remote driver (based in the US) who will be able to take over control of the Pods if they get into a situation where human decision-making is required.

Despite being confined to corporate campuses for now, Einride envisions its technology making a measurable difference in terms of emissions, estimating that the GE partnership will save the company 970 tons of carbon dioxide emissions in the first year, with that quantity increasing as more trucks are added.

“Between seven and eight percent of global CO2 emissions come from heavy road freight transport,” Robert Falck, CEO and founder of Einride, told TechCrunch. “One of the drivers for starting Einride is that I’m very worried that by optimizing and making road freight transport autonomous, but based on diesel, it’s likely that we will actually increase emissions because it would become that much cheaper to operate.”

This would be a textbook example of the Jevons Paradox: when technological progress increases the efficiency with which a resource is used, pushing its cost down—but causing consumption to then rise due to increasing demand, ultimately canceling out any savings of said resource.

Electrification, then, is a key aspect of Einride’s strategy, and one of its three core focus points (along with digitization and automation; the company created a digital platform that handles customers’ planning, scheduling, routing, invoices, and billing). “You can actually electrify up to 40 perecent of the US road freight transport system with a competitive business case using existing technology,” Falck said. “It’s more about deploying new way of thinking rather than just improving the hardware.”

Einride also has contracts in place with tire maker Bridgestone and oat milk manufacturer Oatly. The company plans to open a US headquarters in New York next year, as well as offices in Austin and San Francisco.