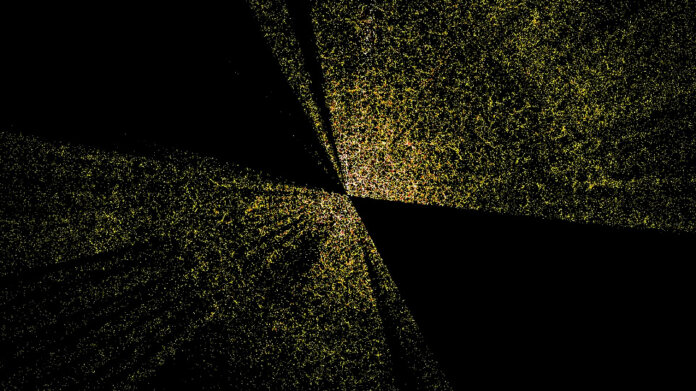 This week, astrophysicists presented the biggest map of the universe yet.

Having nailed down the position of 7.5 million galaxies, the map is larger and more detailed than all its predecessors combined. And it’s nowhere near complete. Using the ultra-precise Dark Energy Spectroscopic Instrument (DESI), the team is adding the coordinates of a million galaxies a month with plans to run through 2026. The final atlas will cover a third of the sky and include 35 million galaxies up to 10 billion light years away.

Of course, this particular map won’t have much practical value for space explorers. Even at the speed of light, it’d take us tens of thousands to millions of years to reach our closest galactic neighbors. Absent a convenient network of intergalactic wormholes, we’re likely stuck in our home galaxy for the foreseeable future. But the map has another purpose.

“This project has a specific scientific goal: to measure very precisely the accelerating expansion of the universe,” Lawrence Berkeley National Laboratory’s Julien Guy told Wired. By measuring the expansion over time, scientists hope to shine a light on dark energy—the mysterious force that seems to be blowing the universe apart—and predict the ultimate fate of the cosmos.

To locate galaxies, DESI uses a collection of 5,000 fiber-optic cables positioned by robotic motors to within 10 microns, less than the thickness of a human hair. This precise positioning allows the instrument to sop up the photons of 5,000 distant galaxies at a time, record their spectra in detail, and determine how much the light has been stretched into the redder bits of the spectrum during its journey to Earth. This “redshift” is caused by the expansion of the universe and indicates how far away a galaxy is—the redder the light, the more distant the galaxy—thus adding a third dimension to galaxy maps.

Whereas prior efforts like the Sloan Digital Sky Survey were slow and tedious—with scientists manually drilling holes and repositioning sensors—DESI is quick and automated, to the point of boring its operators on any given shift. But those shifts are prodigious, each adding some 100,000 galaxies to the map.

The scale is huge. Individual galaxies, each with hundreds of billions of stars, are reduced to points of light flowing in enormous filaments, clusters, and voids. “[These are] the biggest structures in the universe. But within them, you find an imprint of the very early universe, and the history of its expansion since then,” Guy said in a statement.

It’s by comparing the universe’s initial conditions just after the Big Bang to its expansion ever since that the team hopes to tease out a better understanding of how dark energy has changed over time.

In the 1990s, studies led by Lawrence Berkeley National Laboratory’s Saul Perlmutter and Australian National University’s Brian Schmidt attempted to measure the expansion of the universe. It had been assumed that the universe’s matter—including stars, planets, dust, gas, and dark matter—would act like a brake on its expansion. Like a ball tossed into the air, gravity’s pull would slow the universe down.

If you can measure the universe’s rate of expansion, you can predict its future trajectory. Will it grind to a halt under the force of its own matter and reverse course, imploding in a big crunch? Will it expand forever, eventually tearing itself apart? Or will it approach equilibrium, where the rate of expansion nears zero?

The teams gathered the light from supernovae with known luminosity—these are called standard candles in astrophysics—to measure the expansion rate. Their results were surprising, to put it mildly. Instead of slowing, they found expansion was accelerating over time. Some gargantuan force was counteracting gravity, and scientists didn’t have the faintest clue what it was.

Cosmologist Michael Turner dubbed this force “dark energy” and has called it “the most profound mystery in all of science.” Now, the race is on to better understand dark energy by putting together a more precise history of the universe’s evolution.

How the Universe Ends

If expansion continues, the universe will never truly end. Over unimaginable eons, each orders of magnitude longer than the current age of the universe, expansion will pull galaxies apart, snuff out stars, and tear matter into its elementary constituents. The end state of the universe would be a chilly and everlasting dark age.

But scientists don’t fully understand dark energy or know the fate of the universe with certainty. Which is why observations from projects like DESI are crucial. By mapping the large structure of the universe over time, scientists hope to chart how the rate of expansion—and perhaps the dark energy driving it—has changed and how it might in the future.

DESI isn’t the only mapping project out there. Other projects, like those that will be conducted by the European Space Agency’s Euclid spacecraft and NASA’s Nancy Grace Roman Telescope, will complement DESI’s findings by looking deeper into the universe, and cataloging even earlier galaxies from when it was just a few billion years old. Scientists are excited to mine this data hoard to further refine the universe’s origin story.

“In five years, we hope that we will find a deviation from this model of cosmology that will give us a hint of what really happens,” Guy told New Scientist. “Because today we are a little bit stuck in a simple model that describes perfectly well the data [we have], but doesn’t give us any new information.”