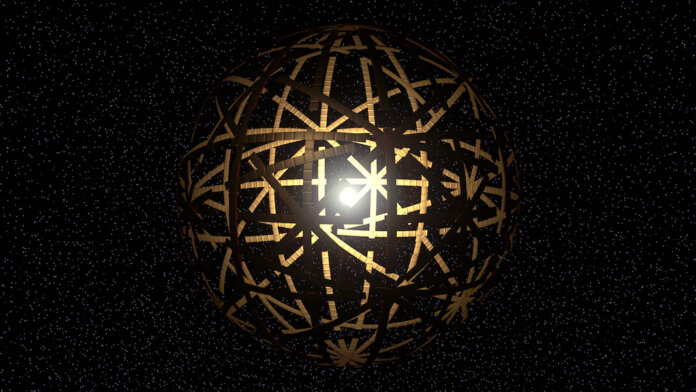 How do you power a super advanced alien civilization? Soak up a star.

We harness the power of the sun using solar panels. What if you were to scale this idea to astronomical proportions? Surround an entire star with solar-collecting structures or satellites to power your sprawling alien galactic empire. Such massive structures are known as megastructures—in this case a “Dyson sphere.” We are already trying to detect possible megastructures in space using the dimming of a star and the glow of megastructure components in infrared light. But recent research provides a new detection method—a Dyson sphere may cause its host star to swell and cool.

“Dyson spheres are one of many ideas about what extraterrestrial technology might look like, but no work had been done so far on how such a structure could affect its host star’s structure and evolution.” –Macy Huston

Dyson spheres were first proposed by astronomer Freeman Dyson in the 1960s. The idea is a fascinating one—a structure orbiting a star to harness power that would be so large it could be detected across the vast reaches of space. How could we spot one?

First, a Dyson Sphere encases a star. Fully encasing a star is unlikely as it’s difficult to maintain the orbit of a complete sphere, and there might not actually be enough material in an entire solar system to do so (even if you took apart all the planets in the system). But a partially encased star would be unusually dim. In 2015, star KIC 8462852, also known as Tabby’s Star dimmed so much, some suggested that perhaps a huge orbiting megastructure had partially blocked our view of the star.

Astronomer Tabetha Boyajian, namesake of the star, was lead author on a paper announcing the discovery of the star’s 22 percent dimming. By comparison, when we detect the passing of planets that obscure starlight in a distant solar system, the dimming is often a fraction of one percent. Was it a Dyson sphere? After further review of the data, the dimming was more likely caused by dust and debris in the system. Follow-up radio surveys of Tabby’s Star by SETI turned up no detectable artificial radio signals.

Secondly, we may also be able to detect waste heat emitted by a Dyson sphere. Heated by the star’s energy, the components of a megastructure may emit infrared light (heat) that could be detected by our telescopes—especially the newly launched, infrared-seeing James Webb Space Telescope. Matter has to reach 525 degrees Celsius to glow in visible light (that’s the temperature the elements on your oven begin to glow). But objects with a lower temperature, while not yet red hot, will still be visible in infrared as they orbit the star.

Lastly, new research by Macy Huston and Jason T. Wright of Penn State University investigates an additional tool in our search for Dyson spheres—physical changes to the star itself caused by an artificial structure.

When encapsulating a star with a megastructure, the star may experience feedback of its own energy. Dyson sphere components could possibly reflect a portion of the star’s radiation back toward the star. Or the components, while absorbing heat from the star, may reemit some of that energy as waste heat toward the star. Returning some of a star’s energy does some weird things to it—the star begins to expand and cool. Seems counterintuitive that a star bathed in its own feedback energy would actually cool. The effect is also stronger depending on the type of star. So what’s going on?

“One of my favorite things about this project was before the Dyson sphere part, I recreated some old simulations of irradiated stars and found that the prior literature was wrong about the fate of irradiated low-mass stars. We showed with more modern stellar models that they would expand and cool, extending their lives, whereas the prior work had found the opposite.” –Macy Huston

Stars don’t all share the same anatomy. Mostly, stars fuse hydrogen into helium in their cores and release a lot of energy in the process. The rate of fusion creates two different zones within a star, radiative zones and convective zones. You can imagine convective zones are like a lava lamp. A bubble of hot liquid is heated, rises, cools, then falls back again. Convective zones require a gradient or difference in temperature between the beginning (hotter) and end (cooler) of the zone to create the cycle of heating and cooling.

In radiative zones, energy is moving primarily outward and may either leave the star or lead to the creation of a convective zone higher up in the star. Where or if these zones exist within a star depends on the star’s mass. Lower mass stars burn hydrogen at a slower rate than higher mass stars. The rate of fusion burning and temperature in the star’s core change the star’s internal arrangement of convective and radiative zones

If a megastructure like a Dyson sphere is returning some of a star’s energy, the star is impacted by that feedback differently depending on where that star’s radiative and convective zones are. To determine the overall changes to the star, Huston and Wright created a simulation of four different stars, a 0.2 solar mass (mass of our own sun) star, a 0.4 solar mass star, a 1 solar mass star, and a 2 solar mass star. Each of the four stars was simulated with stellar feedback levels ranging from 1 to 50 percent over the period of its entire lifespan.

Lower mass stars are primarily convective. Feedback to the star reaches this convective zone where it is carried all the way back to the star’s core. Returning energy to a star’s core actually slows the rate of nuclear fusion causing the internal temperature of the core to drop—a new discovery by the research team which disproved previous studies of the effects of feedback on a star. This is the counterintuitive part. Why would returning energy to the core cause a cooling in core temperature?

A star is held together by gravity crushing the star under its own weight. This crushing gravity creates pressure in the star’s core which increases temperature—as all those atoms are smashing together—resulting in fusion. Energy from fusion pushes back against the force of gravity, preventing further collapse of the star and achieving balance. Gravity in, energy out.

But when extra energy is fed back to the core, that balance is disrupted and the star can expand outward against gravity. The atoms in the core of the star move farther apart, move more slowly, and as a result are not smacking into each other as frequently. Fusion requires the collision of atoms, and so the decreased rate of collision reduces the rate of fusion. But with the decreased rate of fusion, the star’s lifetime is significantly increased. A 50 percent feedback can double the life of a 0.2 solar mass star. Low mass stars already have lifetimes beyond the current age of the universe, but feedback could tack on a few hundred billion years on top of that.

The returned energy also reduces the temperature differences between the top of the convective zone and the bottom of the convective zone because the cooler top of the zone is now being warmed by the energy feeding back from the Dyson sphere. The result is that a star’s convective zone can be partially transformed into a radiative zone. Where convection would have normally begun to return mass and energy back to the star, the new radiative zone reaches farther outward and the star begins to expand. Fifty percent feedback increases the radius of the star by 15 percent. Overall, the star doesn’t change temperature because the cooler core temperature is offset by the surface temperature increasing from the feedback.

Higher mass stars are more radiative than convective. The radiative parts of the star resist feedback, pushing the additional energy away. Unlike the convective star, the feedback is unable to reach the star’s core, and so the star’s lifespan is relatively unaffected, as the rate of fusion remains constant.

The most dramatic changes in radius are with one solar mass stars. One solar mass stars have a thin convective exterior containing two percent of its overall mass. Incoming feedback piles up at the transition between this thin layer and the deeper radiative interior creating a spike in temperature. The convective exterior becomes more radiative and begins to swell. Because the swelling convective zone is so shallow, it can expand more easily, causing the star to grow to triple its normal radius in the 50 percent feedback model.

While the cores of higher mass stars don’t cool, feedback to the surface is trapped by the radiative zones, meaning these stars’ temperatures can warm overall. In addition to stellar dimming and infrared glow of Dyson sphere components, these physical changes in a star’s size or temperature may be the “tell” to indicate the presence of a megastructure.

“I think a lot of SETI work focuses on what we could detect, but it’s also interesting to think about what these technologies would mean for the life that created them. How does it affect them, and what does it teach us about their motivations? Could Dyson sphere feedback be used to intentionally extend the lifetime of a star?” –Macy Huston

The feedback effects may themselves be useful for stellar engineering projects of an advanced alien civilization. Generally speaking, more feedback means the Dyson sphere is less efficient as the energy is lost back to the star. But you might design a Dyson sphere to intentionally create as much feedback as possible to increase the lifetime of a given star. Maybe your advanced civilization really plans ahead and decides it needs those few hundred billion years of extra energy.

Or you could create a type of Dyson sphere called a Shakadov Thruster. A Shakadov Thruster is a type of “cold” Dyson sphere—essentially a giant mirror reflecting nearly all of a star’s energy back to it. By positioning the mirrors on only one side of a star, the reflected energy could change the star’s direction in space. In a billion years or so, a civilization could move an entire solar system several thousand lights years to another part of the galaxy. Hey, maybe your solar system has somewhere to be! A giant space mirror like that would be really, really bright and may be visible to telescopes.

Our new super space telescope, James Webb, will see the universe in infrared light, so it could be used to scan for the heat of glowing Dyson spheres and their impacts on their host stars. The results of these simulations help us know what we’re looking for in advance.

We’re living in one of the most fascinating times in the search for alien life, when our observational tools are more powerful than ever—perhaps strong enough to see the architecture of a civilization taming a glowing giant.

This article is republished from Universe Today under a Creative Commons Attribution 4.0 International license. Read the original article. 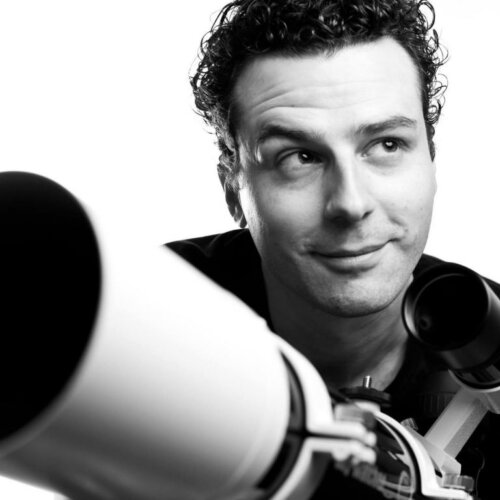 Matthew Cimone
I grew up watching Star Trek which taught me that life was about finding a crew to explore the universe and to do good in that universe where you can. I love the intersection of astronomy and society—how the exploration of the universe reminds us to cherish life on our own world. I make decent pasta sauce.
RELATED