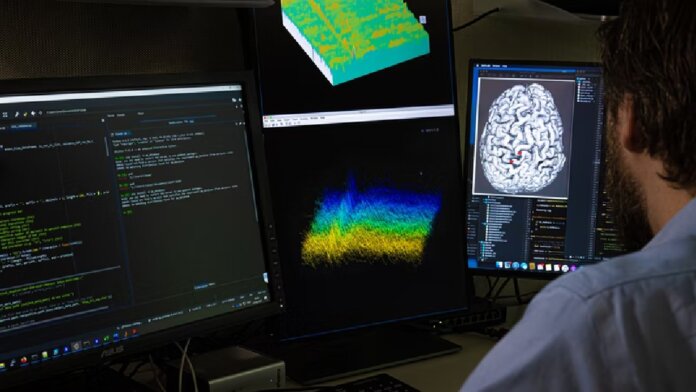 ALS (amyotrophic lateral sclerosis) is devastatingly cruel. As neurons that control movement slowly die off, you lose the ability to walk, speak, and breathe. Your mind remains sharp, but you’re completely locked in, without any way to communicate with the outside world.

That’s what a 37-year-old man experienced. Diagnosed at 30, in just 4 months he lost his ability to speak and walk. In two years, he could no longer move his eyes—his only method of communicating with his wife and young son. Breathing through a ventilator and completely paralyzed, he was trapped inside his mind.

Determined to break out of his physical prison, the man signed up for a highly experimental procedure. Two microelectrode arrays were surgically implanted into brain regions that control movement. Just over 100 days after surgery, and after extensive training, the patient was able to use his mind to spell out his thoughts in complete sentences.

His first request? Change his body position to be more comfortable. His next? “I would like to listen to the album by Tool [a band] loud,” then “Now a beer.”

“People have really doubted whether this was even feasible,” said Dr. Mariska Vansteensel at the University Medical Center Utrecht, who was not involved in the study, to Science.

If replicated, the system promises to bring back communication to hundreds of thousands of people who are locked inside their minds, be it because of ALS, stroke, cancer, or traumatic brain injuries. For now, the method is still far from being ready for clinical use. Years of training aside, the procedure is highly tailored to each person, with a hefty bill of at least $500,000 over the first two years.

The field is also mired in controversy, with two of the study’s authors embroiled in a scientific misconduct scandal for their past work on locked-in patients. As for the new work, brain implant expert Dr. Natalie Mrachacz-Kersting at the University of Freiburg, who wasn’t involved but is aware of their history, said, “I would say it is a solid study.”

The patient couldn’t care less. “First I want to thank” Dr. Niels Birbaumer, the lead author of the study, he said with his mind. A year later, “my biggest wish is a new bed and that tomorrow I come with you for barbecue,” he told his family.

The Long Road There

After his diagnosis, the man mapped out a game plan familiar to any family battling ALS. At its center was an eye-tracking device he could use to spell out his thoughts. But as the muscles around his eyes gradually failed, he could no longer fix his gaze, rendering the tracker useless. The family subsequently developed their own pen-and-paper system so that they could track simple thoughts based on his eye movements. It was rudimentary: any observable eye movement is considered a “yes,” otherwise they assume “no.”

Realizing he may soon lose all eye control, the patient began his journey to communicate through his brain’s electrical signals alone. With the rise of increasingly powerful software and biocompatible brain implants, linking the brain to computers—and bypassing neural damage—is exploding into a widely powerful, if still experimental, strategy to battle paralysis.

Starting with a non-invasive setup, he was fitted with electrodes on the surface of his skull to capture his brain’s broad electrical patterns. Because the skull scatters signals and brings in noise, the system also measured electrical signals across the eye as a separate source of data. Developed by study authors Birbaumer and his long-time collaborator Dr. Ujwal Chaudhary, the system worked on a binary “yes” or “no.”

Within a year, communications failed once again. Anticipating his fate for total lock-in, the man—in agreement with his wife and sister—eschewed the eyes altogether. Instead, they opted for brain implants to directly tap into his neural signals.

In June 2018, just three years after his diagnosis, the man had two microarray electrodes implanted into his motor cortex. Each implant contained 64 channels to listen in on his brain’s activity as a way to decode and communicate with the outside world.

It’s not a new idea. One study in 2016 used brain implants—a total of 16 electrodes—in a woman to control typing by imagining movements in her hand. Unlike the current patient, she was still capable of blinking her eyes, which made her case different. “We really don’t know if communication, even from brain signals, is still possible once all muscle control fails,” the study authors said.

Almost immediately, they hit a wall. A day after the implant, while the patient could still move his eyes, the team asked him to rely on the family’s previous strategy of communicating “yes” or “no” while monitoring his brain signals. Unfortunately, the signals were far too weak. Asking the patient to imagine hand, tongue, or foot movements—all tricks from previous work—also failed to generate neural signals capable of decoding his intentions.

Nearly three frustrating months later, the team changed their strategy. They tapped into neurofeedback, a method that allows someone to modify their brain signals with real-time feedback on whether they’ve succeeded. It sounds like academic-meets-new-age meditation, and it is a bit unusual as a training paradigm. But neurofeedback is being tested as a method of self-control of brain functions for a variety of disorders, including anxiety, depression, insomnia, addiction, and others, with varying levels of success.

Here, the team used auditory neurofeedback as a way to better measure neural responses near the implanted electrodes. They first played a tone, and asked the man to try to manipulate the tone either higher or lower in pitch. Under the hood, the man’s neural firings spiked faster or slower depending on the pitch, providing a powerful baseline.

The strategy worked. The patient was able to move the tone’s pitch on his first try. Within two weeks he could match the tone just by concentrating. These initial tests allowed the team to pick out highly responsive neurons, and using the data, they devised a simple strategy: by holding a tone high or low, he could indicate “yes” or “no” at first, and subsequently, individual letters.

A Long Road Ahead

The training was tough. On each session day, the team started with 10 minutes of baseline recordings while the man rested.

“It’s how we can run our software program to determine the firing rate of different individual channels” to see which ones are optimal for neurofeedback, the authors explained. Overall, the man matched 80 percent of the feedback before they continued on to spelling sessions. Within the first three days, he was able to spell his own, his wife’s, and his son’s names.

But it’s still a grueling task: even with months of training, he could communicate at about one character a minute, or 131 characters per day. And that’s just the intelligible ones. Unfortunately, even with training there wasn’t an increase in speed.

Yet painstaking as it is, the man is able to reach out to his care team and his family. One message asked to prop his head up higher when he had visitors. Another asked for no shirts, but socks on for the night.

“He even gave suggestions to improve his speller performance by spelling ‘turn on word recognition’,” the authors said about six months after the implant. Within a year, he said “Boys, it works so effortlessly” to the team, and asked his wife for a nice supper of “Goulash soup and sweet pea soup” in his feeding tube.

Time, tragically, wasn’t on his side. In the three years since his implant, communications slowed down and became increasingly riddled with errors, to the point of complete incomprehensibility.

Why this happened remains a mystery, but experts believe it’s likely because of scar tissue forming around the electrodes, which dampen the brain’s signals. Although the authors did not report any inflammation or infections in the implant area, it’s always a risk.

But as a trailblazer, the study sketches a new beginning for people who are locked in. It’s high reward with extremely high responsibility: many patients at this stage may be at the end of their lives. How confident can we be in a technology that decodes their opinions on treatment and medical decisions? What happens if the brain implant misconstrues a thought implicating their care? And for diseases with no cure, at what point do these mind-machine bridges become false hope to loved ones as the brain slowly fades away?

For now, the spunky patient isn’t concerned with all that. With the implant, he asked his four-year-old son to watch Disney’s Robin Hood, or “witch and wizard” on Amazon. “I love my cool son,” he said with his brain.