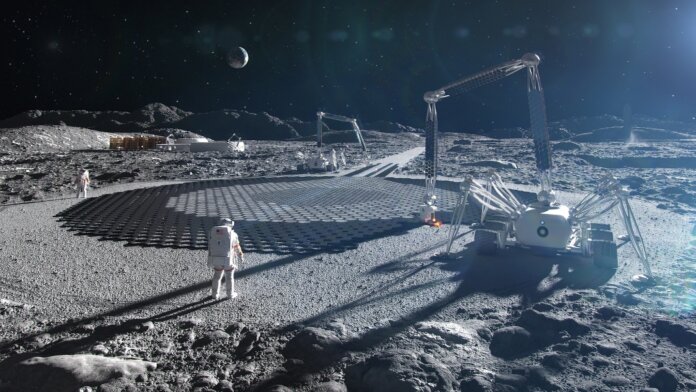 Austin, Texas-based 3D printing construction company ICON has gotten some pretty significant projects off the ground in recent years, from a 50-home development in Mexico to a 100-home neighborhood in Texas. This week the company won a NASA contract that will help it get an even bigger project much further off the ground—all the way to the moon, in fact.

The $57.2 million contract is intended to help ICON develop technologies for building infrastructure on the moon, like landing pads, houses, and roads. The goal is for ICON to build these lunar structures using local material—that is, moon houses built out of moon dust and moon rocks.

“To change the space exploration paradigm from ‘there and back again’ to ‘there to stay,’ we’re going to need robust, resilient, and broadly capable systems that can use the local resources of the moon and other planetary bodies,” said ICON co-founder and CEO Jason Ballard in a press release.

Doing anything in space is ultra-expensive because you have to bring the materials and tools you need up from Earth. Imagine loading rockets with bricks or cement mix for 100 houses and flying them to the moon. Not only would this be cost-prohibitive, it could very well be a waste of time and resources because those building materials wouldn’t hold up on the lunar surface the same way they do on Earth.

“If you tried to plan a lunar settlement or a moon base and you had to bring everything with you, every time you wanted to build a new thing it’s like another $100M,” Ballard said. “But once you’ve got a system that can build almost anything—landing pads, roadways, habitats—and it uses local material, you are probably two or three orders of magnitude cheaper to build a permanent lunar presence than you would be in any other way that we can think of.”

ICON engineers plan to study lunar regolith to determine how it might behave when used as a building material. According to Payload, ICON’s regolith-based building process would look something like this: they’d put down an initial layer of moon dust and rocks in the shape of whatever they’re trying to build—say, the walls of a lunar habitat—then use a purpose-built laser to melt the regolith so that it would be permanently stuck together. Once the first layer solidified, they’d add another; it’s not so different from the way their 3D printers work on Earth.

The “printer” ICON is developing for use on the moon is called Olympus, and it looks something like a giant mechanical spider with a crane attached. It would land on the moon via commercial lander and drive itself to the build site to start processing regolith for construction.

Similar to how soil on different parts of Earth can vary greatly in composition—in some places it’s rockier, in others it’s sandier, in yet others it contains clay (and that’s not even to mention the differences in its chemical makeup)—the moon’s regolith isn’t quite the same all over. ICON will need to test how Olympus functions with different materials to make sure the tool will be usable on various parts of the moon.

The new NASA contract is actually a continuation of an existing US Air Force contract, partially funded by NASA, under which ICON was tasked with exploring commonalities between Earth-based and off-Earth applications of 3D printing construction. The contract runs through 2028 and includes a  demonstration on the moon’s surface in 2026.

It all sounds pretty ambitious, and like something straight out of a sci-fi film. We’ll see how ICON’s plans play out over the next four years; various wrenches could get tossed into the project’s spokes and slow things down.

But Ballard is characteristically optimistic. “The final deliverable of this contract will be humanity’s first construction on another world, and that is going to be a pretty special achievement,” he said.