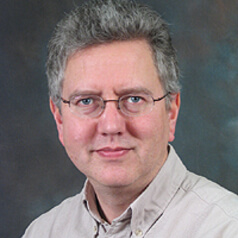 I am Professor of Physics and Deputy Director (Solar System) at the Mullard Space Science Laboratory (MSSL), University College London, located in Surrey.

My specialty is the plasma interaction with unmagnetized objects, such as comets, Titan, Enceladus, Venus, and Mars, planetary magnetospheres, and planetary exploration. Through my career I've been lucky to work on many of the planetary and magnetospheric missions with plasma instruments on board. One of these was Cassini, which I've been fortunate to have been involved with (as lead co-investigator for the Electron Spectrometer (ELS), part of the Cassini Plasma Spectrometer (CAPS) since the instrument proposal in 1989. This included selection, getting the money, design, build, test, test, and test, calibrate launch, arrival at Saturn, the prime mission to 2008, equinox mission to 2010—and it still worked well (until 2012) into the recent (extended-extended) "Solstice" mission (North polar summer on Saturn) with the spectacular end of mission in 2017.

I am Principal Investigator for the PanCam instrument, the scientific eyes of the ESA-Russia ExoMars 2020 rover, going to Mars in 2020, landing in 2021, to look for signs of past or present life on Mars by drilling up to 2m under the surface. The PanCam team includes key contributions from Germany, Switzerland, Austria and Wales, and a strong truly international science team including several UK institutes. I am also co-investigator on the JUICE PEP and JANUS instruments (launch 2022, Jupiter orbit insertion 2030, then Europa, Ganymede and Callisto flybys, before entering Ganymede orbit in 2032), and on Mars Express ASPERA-3, Venus Express ASPERA-4, MMS-FPI, Rosetta RPC, BepiColombo MPPE, Cluster PEACE and Giotto JPA.

Andrew Coates - Jul 19, 2019
Transforming the red planet to support life has long been a dream of science fiction. Mars is now too cold to support life. Its atmosphere is also too thin to protect any living organisms...
Read more