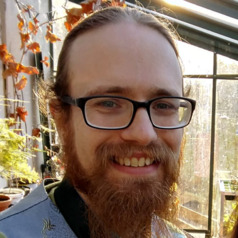 Alexander (Sandy) is an atmospheric chemist who studies processes at the interfaces between solids and gas or liquids. He has worked on problems in planetary atmospheres including Venus, Titan, and Earth's mesosphere, stratosphere, and surface.

He has recently focused on crystalization in Polar Stratospheric Clouds, which relates to the formation of the ozone hole, and on developing a novel catalyst for reducing the negative air quality impacts of combustion exhaust.

Sandy has worked at the University of Leeds since starting his PhD in 2012, having been a teaching and research fellow since 2016. Based in the School of Chemistry, he collaborates widely with Schools of Physics and Astronomy, Earth and Environment, and Chemical and Process Engineering.

Alexander James - June 24, 2022
Reducing carbon emissions from roads, railways, and shipping requires implementing a range of solutions simultaneously. As far as cars are concerned, cutting the number of journeys altogether (by making it easier for people to...
Read more