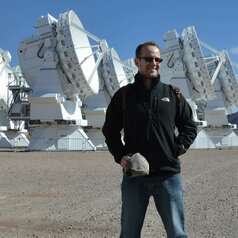 Dr. Leigh Fletcher is a planetary scientist specializing in the exploration of our solar system’s giant planets via robotic spacecraft missions and ground-based astronomical facilities. He is an associate professor in planetary sciences at the University of Leicester.

He earned a natural science degree from Cambridge, a PhD in planetary physics from Oxford, and has since worked as a NASA fellow at the Jet Propulsion Laboratory and as a research fellow at Oxford. He held a Royal Society University Research Fellowship (URF) between 2013 and 2020. He was the recipient of the 2016 Harold C. Urey prize for outstanding achievements in planetary science by an early-career scientist, awarded by the Division for Planetary Sciences (DPS) of the American Astronomical Society. He is a team member for the Cassini mission to Saturn, the Juno and JUICE missions to Jupiter, and is a passionate advocate for future exploration of the distant ice giants. He currently leads a planetary atmospheres team at the University of Leicester, funded by the Royal Society, STFC, and the European Research Council.

Leigh Fletcher - December 24, 2021
When the immense sound of the Ariane 5 rocket rumbles across Europe’s spaceport in French Guiana, it will signal the end of a journey decades in the making. Perched atop the rocket will be...
Read more