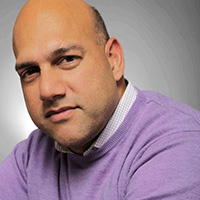 Salim Ismail is the best-selling author of Exponential Organizations, a sought-after technology strategist, and a renowned entrepreneur with ties to Yahoo!. Google, and Singularity University. He consults with governments and the world’s top Fortune 500 companies on innovation and growth, and his work has been featured in premier media outlets like the New York Times, Bloomberg BusinessWeek, Fortune, Forbes, WIRED, Vogue, and the BBC.

Ismail travels extensively sharing a global perspective on the impact of breakthrough technologies and how organizations can leverage these disruptions to grow 10 times faster than their peers. His book quickly reached No. 1 on Amazon’s “Best-Sellers in Business Management,” was also named Frost & Sullivan’s “Growth, Innovation and Leadership Book of the Year.” In presentations, he shares the five internal and five external characteristics that exponential organizations have in common and walks audiences through how any company, from a startup to a multi-national, can streamline its performance and grow to the next level. Audiences walk away with a tailored action plan for moving forward, a new process for leading-edge thinking, and an understanding of what emerging technology trends mean for the future. His captivating, educational, and downright jaw-dropping presentations have been called “mind-blowing” and “the best talk I think I’ve ever heard.”

Solving Humanity’s Greatest Challenges.Ismail has spent years building Singularity as its former founding executive director and global ambassador. SU is based at NASA Ames, and its goal is to “educate, inspire and empower a new generation of leaders to apply exponential technologies to address humanity’s grand challenges.” SU – whose founders hail from Google and the X PRIZE Foundation – has empowered people from more than 85 countries to apply disruptive technologies – biotechnology, artificial intelligence, and neuroscience – to more than 100 startups and countless patents and ideas.

Tech Entrepreneur. Prior to Singularity, Ismail was a vice president at Yahoo, where he built and ran Brickhouse, the company’s internal incubator. His last company, Ångströ, a news aggregation startup, was sold to Google in 2010. He has founded or operated seven early-stage companies including PubSub Concepts, which laid some of the foundation for the real-time web, and the New York Grant Company, a direct response to 9/11. In its first year, the organization attracted over 400 clients and delivered over $12 million of federal grants to the local economy.

The Secrets of Unicorn Companies (and the 100 Most Scalable Organizations)

Salim Ismail - Apr 07, 2015
We are in era of unprecedented value creation, and its symbol is the Unicorn — a company that rapidly gains to a valuation of a billion dollars and beyond. While pundits are again asking “Are we...
Read more