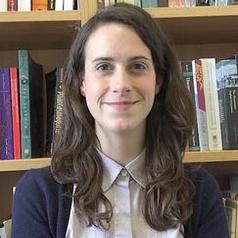 Stephanie O’Rourke joined the School of Art History at St Andrews in 2016. She holds a Ph.D. from Columbia University and a B.A. from Harvard University. Stephanie specializes in eighteenth- and nineteenth-century European visual culture, with a particular interest in exchanges between the history of art and history of science. Her ongoing research addresses evolving discourses about vision, affect, spectatorship, and the body at the turn of the nineteenth century. Stephanie’s current book project examines epistemology and the body in artworks by Henry Fuseli, Anne-Louis Girodet, and others.

Prior to coming to St Andrews, Stephanie also conducted research on experimental printmaking and Impressionism as a Museum Research Consortium Fellow at The Museum of Modern Art. Her work has been supported by fellowships and grants from the Social Science Research Council, Yale Center for British Art, Pierre and Tana Matisse Foundation, Cathedral Fund at the Royal Academy, Mellon Foundation, and Columbia University.

Stephanie O'Rourke - Sep 28, 2016
The Who’s lead singer Roger Daltrey and his wife Heather are auctioning a selection of rare mechanical devices called automata in Edinburgh, Scotland. Automata are models of people or animals from previous centuries that...
Read more