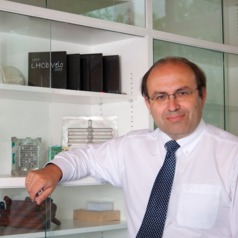 I was head of Particle Physics at Liverpool, from 2011-2019. My aim was to support the group to tackle the most fundamental of problems in Physics.

The group has experiments at CERN, Fermilab and in Tokai (Japan) as well as SNOlab in Canada. We work at the energy frontier (ATLAS) and precision frontiers (LHCb) at CERN and g-2 (FNAL). We have a program understanding the properties of neutrinos at T2K and HK (Japan), Proto-Dune and DUNE. The group has played in important role in terrestrial measurements of Dark Energy/Matter and Gravitational Waves using Quantum Technologies and has joined the MAGIS experiment at FNAL and LZ experiment for DM (dark matter). All these experiments should lead us to a better understanding of the nature of matter (luminous and dark), to understand the predominance of matter over anti-matter, to understand the properties of neutrinos, and to make first measurements of DE. I initiated Liverpool's muon program which now includes mu2e and mu3e as experiments.

I strongly believe that the group must be involved closely with both theoretical developments and enabling technologies and am actively involved in building relationships between our engineering departments and CERN and other international partner laboratories.

From 1997-2011 my LHCb group to build the VELO detectors which is one of the highest precision detectors at the LHC and has enabled the LHCb experiment to make critical measurements of the properties of B meson days. Previously I was a member of the DELPHI group where I made precision measurements of B-lifetimes and WW couplings.

I am currently working on the LHCb upgrade due to take data early 2022. I am also working on the g-2 experiment at FNAL, where Liverpool built the tracking detectors, and hopes is studying the anomalous magnetic moment of the muon and its electric dipole moment (EDM). I am also trying to build a small lab experiment to attempt to look for evidence of the foam like nature of space and time at the Planck scale.

Themis BowcockMark Lancaster - Apr 09, 2021
Seven years ago, a huge magnet was transported over 3,200 miles (5,150km) across land and sea, in the hope of studying a subatomic particle called a muon. Muons are closely related to electrons, which orbit...
Read more