Major news outlets are reporting that researchers have been able to grow heart blood vessels in mice by injecting the mice with progenitor cells. The researchers implanted “human endothelial and mesenchymal progenitor cells isolated from blood and bone marrow” into the mice and within a week an extensive network of new blood vessels had formed from the injected cells. Four weeks later the network of blood vessels was still functioning normally within the mice. The original research article can be found here:

Eventually this work could lead to numerous human therapies, such as the revascularization (creation of new blood vessels) in damaged human hearts that have suffered heart attacks and other calamaties. In fact we are told that such a study was already been completed in Germany two years ago! From the report:

“Two years ago physicians at Goethe University in Frankfurt, Germany…reported a study with 75 people who had heart attacks. Some were
given injections of progenitor cells, derived either from bone marrow
or blood. Improved heart function was seen in those who got the
progenitor cells, the German researchers reported.”

I dug up the research report for the German study here: 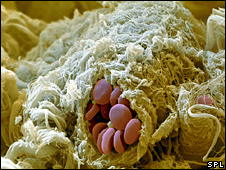