Wired came out with a pretty nice article on the Personal Genome Project (PGP) with a focus on the project’s founder, George Church. The PGP will be collecting and analyzing the DNA of 100,000 volunteers. Each volunteer must fill out an exhaustive survey that will tally information about them such as head circumference, ability to roll heir tongues, exposure to power lines, dietary preferences, medical history, and much more. This data will be entered into a database along with their genetic data, creating a vast trove of data that can be cross referenced in countless ways. From the article:

“This phenotype data will be integrated with a volunteer’s genomic
information, then combined with statistics from all the other subjects
to create a potent database ripe for interrogation. In contrast to the
heavy lifting that genetic research requires now — each study starts
from scratch with a new hypothesis and a fresh crop of subjects,
consent forms, and tissue samples — the PGP will automate the research
process. Scientists will simply choose a category of phenotype and a
possible genetic correlation, and statistically significant
associations should flow out of the data like honey from a hive. A
genetic predisposition for colon cancer, for instance, might be found
to lead to disease only in connection with a diet high in barbecued
foods, or a certain form of heart disease might be associated with a
particular gene and exposure to a particular virus. Genomic discovery
won’t be a research problem anymore. It’ll be a search function. (This
helps explain why Google, among others, has donated to the project).“

One of the fantastic features of the PGP is that all of the data will be completely open to the public. By opening the data to the public researchers across the globe will be empowered to sift through the data and further advance the field of genetics for all of humanity. From the article:

“If the PGP were simply an exercise in breaking down 100,000 individuals
into data streams, it would be ambitious enough. But the project takes
one further, truly radical step: In accordance with Church’s principle
of openness, all the material will be accessible to any researcher (or
lurker) who wants to plunder thousands of details from people’s lives.
Even the tissue banks will be largely accessible. After Church’s lab
transforms the skin into stem cells, those new cell lines — which have
been in notoriously short supply despite their scientific promise —
will be open to outside researchers. This is a significant divergence
from most biobanks, which typically guard their materials like holy
relics and severely restrict access.”

If you want to be a volunteer to donate your genetic information (I did!) to the project all you have to do is sign up at the PGP website here. 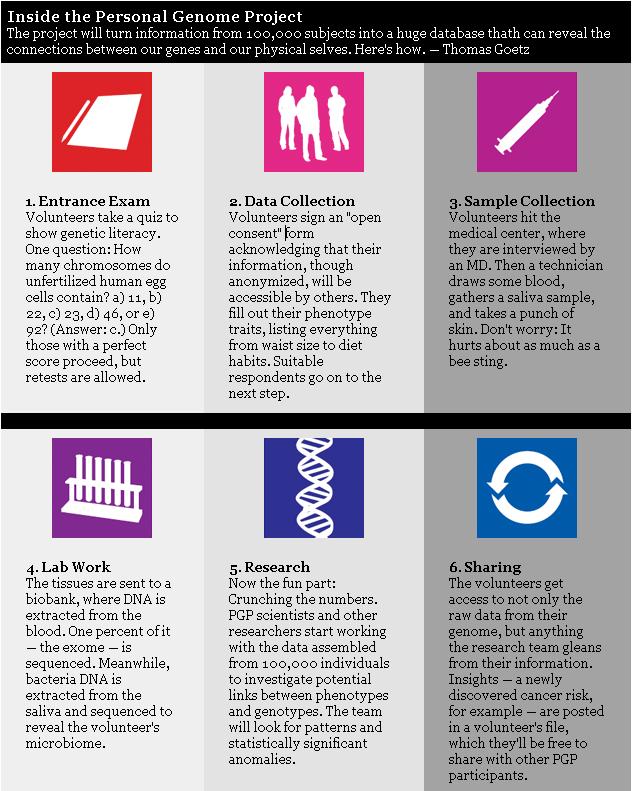 Picture from the wired article