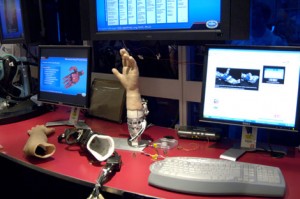 One of the major problems with current prosthetic limbs is that they signal in only one direction, yet true human limbs signal on a bidirectional basis. Not only does the brain send signals to the limb to tell it what to do, but the limb sends signals back to the brain about what it is sensing in the form of pressure, temperature, and so on. The brain uses this sensory information to send adaptive instructions to the limb, allowing for the subtle or rapid changes that define true human agility. From the article:

“Sensory feedback for prosthetics is in the embryonic stages. The best mechanism on the market today consists of a vibrating motor that buzzes against the skin more or less intensely to reflect, for instance, such force factors as grip strength. The DARPA project is gunning for much more than that: researchers want an arm that transmits sensation to the user—pressure, texture, even temperature…with 100 sensors that connect the body’s natural neural signals to the mechanical prosthetic arm to create a sensory feedback loop…”

“As it turns out, the degree of control is directly proportional to the invasiveness of the method.”

The researchers are working with different levels of invasive interaction with the user, but there are two major categories of interaction.

“In a an individual with both limbs, those nerves travel from the spinal cord down the shoulder over the clavicle and then into the armpit, where they connect to about 80,000 nerve fibers that allow the brain to communicate with the arm.”

The second category is to entirely skip the nerve fibers and link directly into the neurons in the brain. From the article:

“Finally, the most extreme solution is meant for people whose bodies no longer offer any means for interfacing to the artificial limb, for whom even nerve-rerouting surgery may not be an option”

“When electrodes penetrate directly into the motor cortex, embedded electronic circuits intercept the motor neurons firing their instructions and, with the help of complex algorithms, translate the related signals into a language that can control the mechanics of the arms.”