Nature recently published an article written by Armand Marie Leroi that opens with this interesting question:

“Now that many people approve the elimination of certain genetically defective fetuses, is society closer to screening all fetuses for all known mutations?”

Although the abortion of a genetically defective fetus is quite controversial in the USA, Leroi points out that in many other countries it is morally acceptable, with 80% or more of such fetuses aborted in France and Taiwan compared to roughly 30% in the USA.

A significant impediment to a universal, total prenatal screen for all known mutations is the invasive and expensive nature of the procedure. Should the procedure become less invasive and less costly I suspect abortions of genetically defective fetuses would skyrocket, quickly overpowering most of society’s moral issues with the matter.

Below are interesting quotes from the article:

“Every year, 4.1 million babies are born in the USA.  On the basis of the well-known risk of Down syndrome, about 6,150 of these babies would be expected to suffer from this genetic condition, which is caused by an extra copy of chromosome 21. In reality, only about 4,370 babies are born with Down syndrome; the  there have been aborted during pregnancy…Data from other regions are similar or even higher: 32% of Down syndrome fetuses were aborted in Western Australia (Bourke et al, 2005); 75% in South Australia (Cheffins et al, 2000); 80% in Taiwan (Jou et al, 2005); and 85% in Paris, France (Khoshnood et al, 2004). Despite this trend, the total number of babies born with Down syndrome is not declining in most industrialized nations because both the number of older mothers and the conception rate is increasing.” 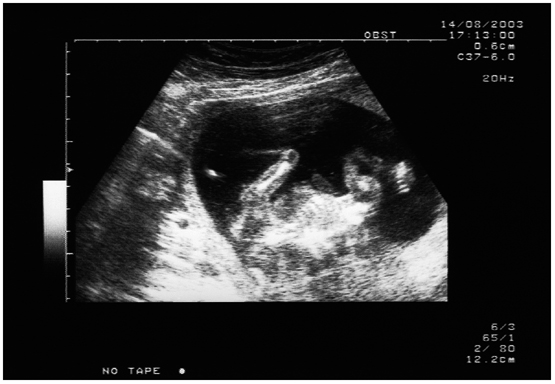 Ultrasound scan to amniocentesis test. Amniocentesis is a diagnostic procedure performed by inserting a needle (seen on the left) through the abdominal wall into the uterus and withdrawing a small amount of fluid from the sac surrounding the fetus. The test can detect chromosomal disorders, such as Down syndrome, structural defects, such as spina bifida (open spine, where the vertebrae fail to close), anencephaly (a condition in which the brain is incomplete or missing), and many rare, inherited metabolic disorders. © Mediscan/Corbis