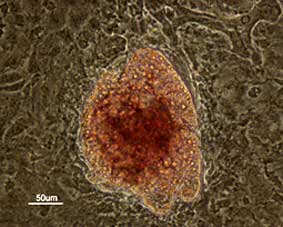 The Harvard Crimson and the LA Times offer some of the better articles reporting that researchers have genetically reprogrammed mice pancreas cells directly into a completely different type of cell called a B cell. B cells are responsible for creating the blood sugar regulating hormone insulin in humans, and it is the absence of these B cells that causes humans to suffer from type 1 diabetes, a currently un-curable disease that requires burdensome lifelong treatment.

With this breakthrough, the Harvard researchers have apparently offered “the first conclusive evidence” that it is possible to genetically convert one type of adult cell or tissue into another type of cell or tissue. Although still years into the future, this research could pave the way for major advances in the field of regenerative medicine where people’s bodies have lost certain types of cells or tissues to injury or disease.

Mice suffering from type 1 diabetes were treated with a virus that
specifically infected their pancreas cells and converted them into B
cells. Ten days later, up to 20% of the pancreas cells had ceased
their normal function and instead begun producing insulin at levels comparable to
B cells from healthy, non-diabetic mice.

Although this is apparently the first demonstration of direct conversion of one adult cell type to another cell type, it should be noted that this is not the only route to creating a desired cell or tissue type. Therapies derived from stem cells and pluripotent cells have been used to create all sorts of cell types in numerous studies and in fact this breakthrough from the Harvard researchers complements rather than competes with these therapies. What is notable here is the proof of concept that mature cells such as pancreas cells can be genetically reprogrammed to do almost anything through the technique of intentional viral infection, changing their behavior or even changing their entire identity.

Human applications for this type of genetic reprogramming are still many years into the future. Not only will effort be required to apply this breakthrough to humans instead of to mice, but also the proteins required to induce the reprogramming, called transcription factors, require years of effort to pinpoint and are specific to the type of reprogramming desired.