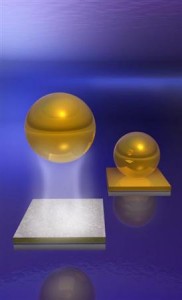 The cover story of the Jan 8, 2009 Nature journal states that “the experimental verification that a bizarre quantum effect — the Casimir force — can manifest itself in its repulsive form is pivotal not only for fundamental physics but also for nanotechnology.”

The Casimir effect creates a force that we don’t experience in the macroworld of humans, but in the nanoworld of nanomaterials and nanomachines this quantum effect causes objects to be either repelled or attracted to each other.  When causing attraction the Casimir effect can be a problem, causing nanomaterials or nanoparticles to get stuck together when you don’t want them to.  Yet the repulsive force may be quite useful for the application of nanoscale levitation and zero friction.

According to an article from Scientific American:

“The repulsion can be used to hold molecules aloft, in essence levitating them, creating virtually friction-free parts for tiny devices, the researchers said.”

“Federico Capasso, an applied physicist at Harvard University in Massachusetts, whose study appears in the journal Nature, said he believed that detection of this force opened the possibility of a whole new class of tiny gadgets.”

“The team, including researchers at the National Institutes of Health, has not yet levitated an object, but Capasso said he now knows how to do it. “This is an experiment we are sure will work,” he said. His team has already filed for patents.”

For those who want to know more, there is quite a bit of information available on the web.  A good starting point is an easy to understand article from the economist which states:

CAN something come of nothing?  Philosophers debated that question for millennia before physics came up with the answer—and that answer is yes. For quantum theory has shown that a vacuum (ie, nothing) only appears to be empty space.  Actually, it is full of virtual particles of matter and their anti-matter equivalents, which, in obedience to Werner Heisenberg’s uncertainty principle, flit in and out of existence so fast that they cannot usually be seen.

However, in 1948, a Dutch physicist called Hendrik Casimir realised that in certain circumstances these particles would create an effect detectable in the macroscopic world that people inhabit. He imagined two metal plates so close together that the distance between them was comparable with the wavelengths of the virtual particles. (Another consequence of quantum theory is that all particles are simultaneously waves.) In these circumstances, he realised, the plates would be pushed together. That is because only particles with a wavelength smaller than the gap between the plates could appear in that gap, whereas particles of any wavelength could appear on the other sides of the plates. There would thus be more particles pushing in than pushing out, and the plates would clash together like a pair of tiny cymbals.

A neat idea. And in 1996, it was shown experimentally to be true.

Earlier the Hub reported on a significant reduction in the strength of the Casimir attraction.

The homepage for the Capasso group at Harvard that produced this research can be found here.

A Gedanken Spacecraft has been proposed that could theoretically propel itself using the quantum vacuum (Dynamic Casimir effect).  It is just a proposal with many limitations, but still fun to think about.

As usual, Wikipedia turns out to be a good source for more information as well.