The emerging field of gene therapy took a huge leap forward in 2008 when vision was substantially restored to several blind patients.

The patients in the study suffer from Leber’s congenital amaurosis (LCA), a rare inherited eye disease caused by a defective gene called RPE65. The condition appears at birth or in the first few months of life and causes progressive deterioration in vision.  Until now there have been no effective treatments available.

Below is an excellent “must watch” video from CBS documenting this amazing breakthrough, followed by further details and comments: 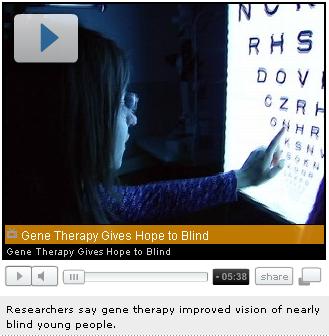 Researchers theorized that if they could “upgrade” these photoreceptor cells with the non-defective gene then damage to the photoreceptor cells would cease and any remaining healthy cells would regain their ability to function.  A virus was used to inject the functioning gene into the target cells and within a week vision improved and remained so after 90 days — the study’s endpoint.

In theory, the younger the patient, the better this therapy will work because the degenerative nature of the disease will have had less time to cause permanent destruction to photoreceptor cells.  Trials are now underway with younger patients and the researchers are hopeful that these younger patients will see substantial, perhaps even full recovery of vision.

Wired has an excellent review of this story.  A few excerpts:

Though the trial was designed to test the therapy’s safety rather than its efficacy, its benefits were so impressive that the researchers decided to publicize their results.

“One of the patients said that the dim red light from his alarm clock had gotten so bright that it bothered him,” said Artur Cideciyan, a University of Pennsylvania opthamologist and co-author of the study. “He had to turn away from it while he was sleeping.”

Cideciyan’s study, published today in the Proceedings of the National Academy of Sciences, is one of three simultaneous trials of gene therapy for Leber’s Congenital Amaurosis, also known as LCA. Results from the first two were published in April in the New England Journal of Medicine:

Much more detail can be gathered at the following links: